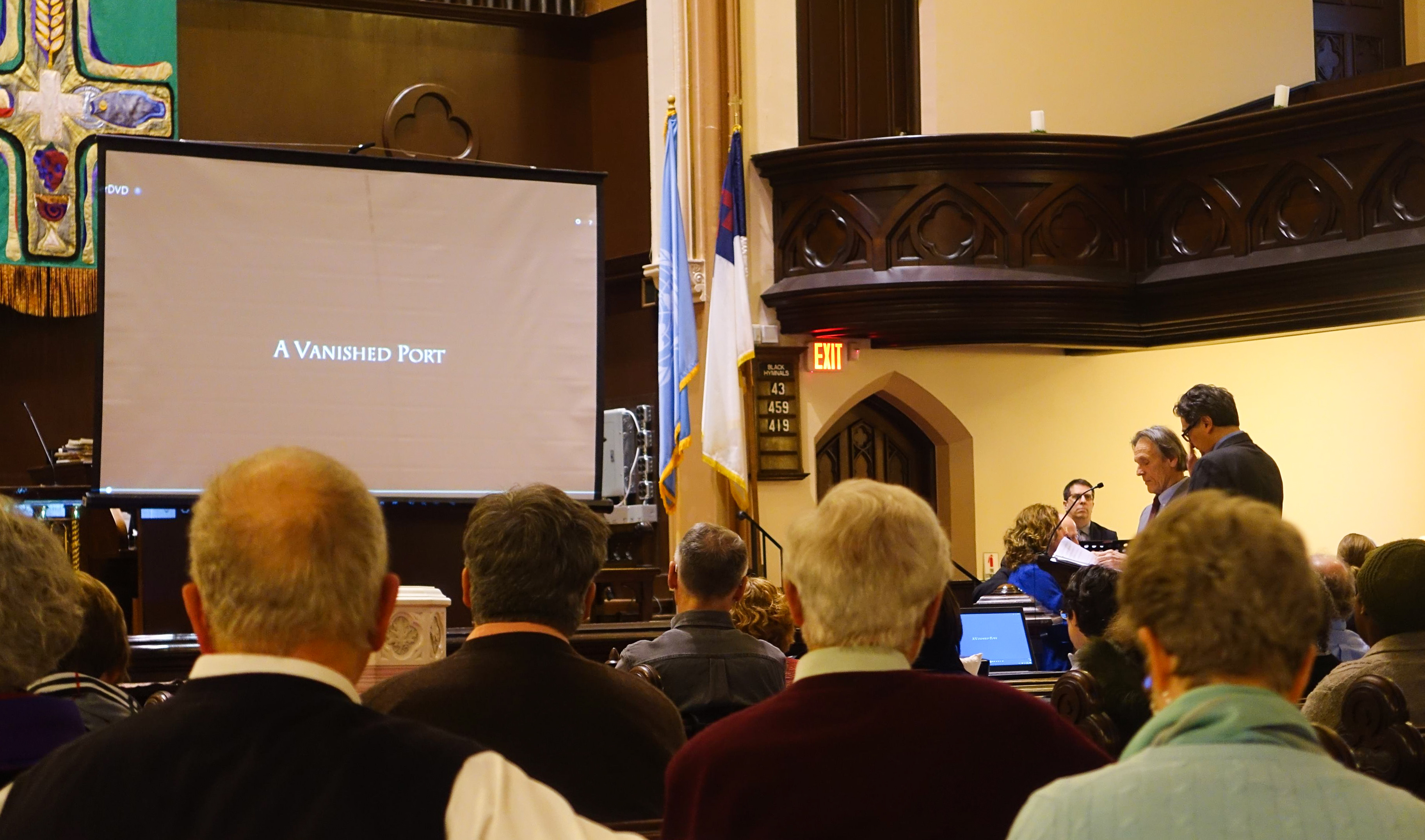 This past Sunday, the First Church of the United Church of Christ hosted the first public conversation in partnership with both the Middlesex Historical Society and the Middletown Racial Justice Coalition. Within the context of the church’s 350th anniversary celebration, these dialogues and presentations will center on giving voice to marginalized histories and experiences in America, ranging from slave narratives in colonial Middletown and the West Indies to contemporary socio-economic and racial disparities within the city.

“We stand in the march of time, bearing witness to a lot of years of American history,” First Church Reverend Julia Burkley said to begin the evening, which consisted of live music, a lecture, and a Q&A session. “While our history is ours to celebrate, it is also important to recognize when we have been silent or when we have been complicit in things that have wounded or oppressed others.” 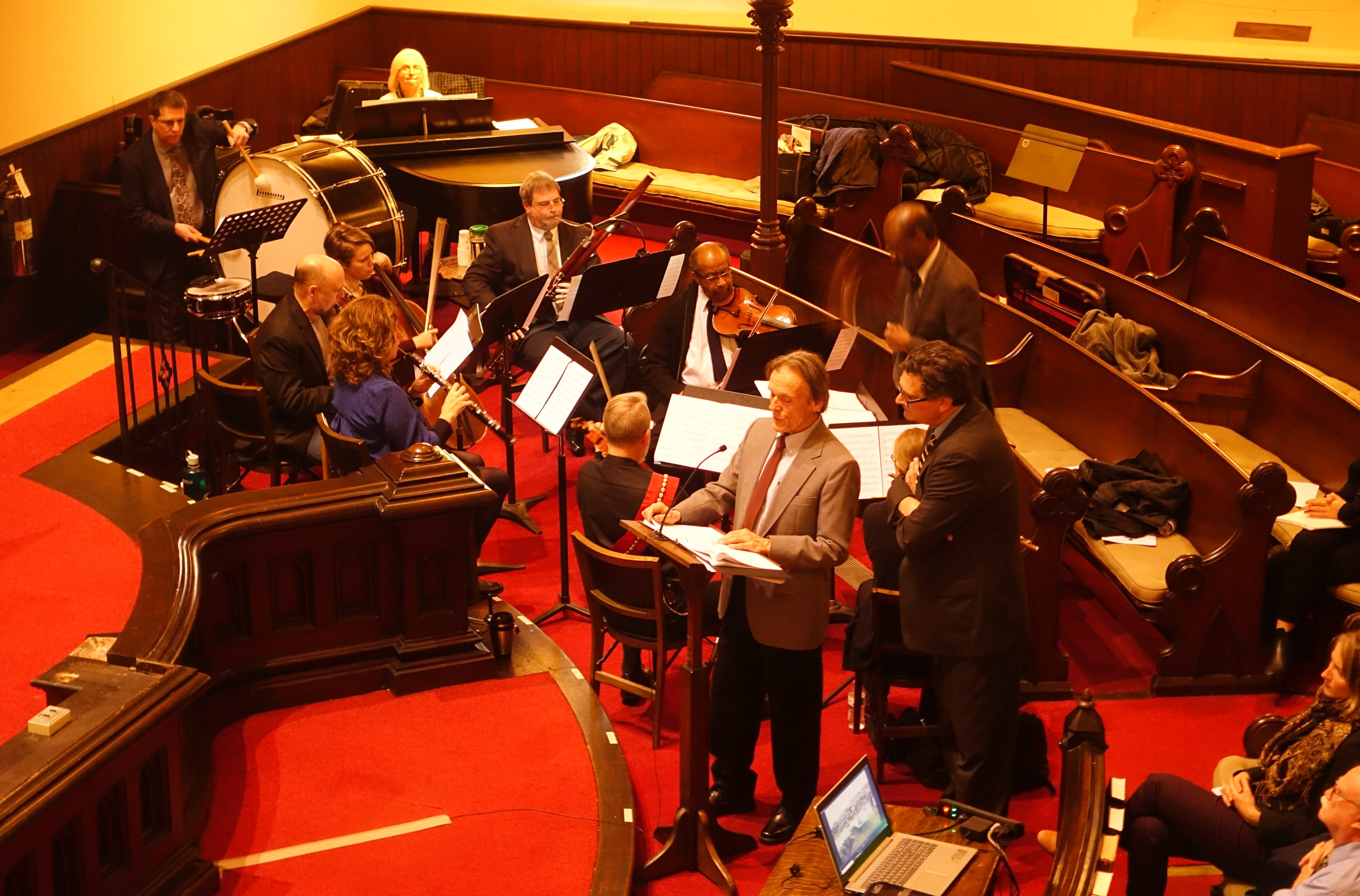 The first stage of the program was a video, which can be viewed on the Middlesex Historical Society website, and was accompanied by live orchestration. Narrators Erik Hesselberg and Bruce Macleod spoke along to the rhythms of the score and pace of the 11-minute film, which consisted of contemporary footage of the riverfront and archival stills of maps, portraits, and paintings of centuries past.

The score was produced by Hesselberg and Lee T. McQuillan, who was also a co-collaborator in organizing the Feb. 11 event.

“How we tell history matters and there are many towns and cities that could have told this similar history, but many are not doing it,” Burkley said before handing the mic off to the Director of the Middlesex Historical Society Deborah Shapiro.

Shapiro spent a little over an hour guiding the packed audience through a slideshow presentation filled with photographs from the “Vanished Port: Middletown & The Caribbean 1750-1821” exhibition and various landmarks in the area.

Since “A Vanished Port” first appeared at the Middlesex Historical Society back in 2016, the exhibition has garnered national recognition. In its two-year run, the collection has won four awards: one from the Association for Connecticut History; an Award of Merit from the Connecticut League of History Organizations; and both the Leadership in History Award of Merit and the Michael Kammen Award from the American Association for State and Local History.

“Middletown was founded by French settlers from the Hartford area and the Massachusetts Bay colony in 1650 although Native Americans, the Wangunks and Mattabesset, were living here 7,000 to 9,000 years before that,” Shapiro began. “In 1776, Middletown, with a population of 5,000, was not only the greatest shipbuilding commercial center between the two great cities in the nation, New York and Boston, but it was the wealthiest and most cultivated town in New England.”

Shapiro described in great detail everything from agricultural tendencies to the shipbuilding techniques that dominated Middletown’s economy throughout the late 18th and early 19th centuries.

“Ships carrying Connecticut agricultural produce, lumber and livestock sailed to the shipping islands of the West Indies such as Nevis, Antigua, Tortola, Barbados, and Jamaica,” she said. “From the West Indies, the ships returned with sugar, molasses, rum, coffee, oranges, coconuts, other Caribbean products, and—unfortunately—Black people who had been transhipped from Africa.”

Shapiro went on to recount some of the known stories of famous River Valley merchants and elites, as well as a more limited history of both local and Caribbean slave experiences as told through the society’s archival materials on the subject. She walked listeners through the violent and often silenced link between the wealthy Forest City and the West Indies slave trade.

“During the long decades of Middletown’s deep relationship with the shipping islands, captive Black people shoved off from Africa and their descendants worked on one of the most dangerous forms of agriculture: the planting, harvesting and refining of the sugar cane plant into sugar and its byproducts,” she said. “Sold into permanent exile to grow sugar, for a hemisphere that had grown addicted to sweet foods and beverages, Black men, women, and children barely into adolescence worked in a labor system so lethal that one third of the captives died in the first few years of their captivity.”

Shapiro concluded her portion of the evening with the society’s mission for the collection, which will continue to show through the end of 2018.

“With this exhibit we are trying to set the record straight,” Shapiro said. “Some historians have written about the [Middletown slave] trade with the West Indies and others have written about slavery on the islands. But no one has connected the two. This is a new way to understand the dynamic interaction between slavery and capitalism and a new way to present American economic development.”

With that, the event transitioned to its final portion on contemporary race issues, which took the form of a Q&A conducted by Rev. Burkley with recent Connecticut Magazine 40 Under 40 winner and newly appointed Director of the Middletown Racial Justice Coalition Precious Price.

Price began where the Historical Society exhibition left off.

“I got to listen to Phillip Mortimer’s will and actually hear the names of slaves who were freed after his death [in 1794] and that was very profound for me,” Price said. “It was almost bittersweet. It was great to hear that there were people who were going to be free, but there were a lot of restrictions and stipulations that were associated with it.”

Local governmental, philanthropic, and activist organizations such as the Department of Children and Families and Middlesex United Way make up the approximately 250 participants involved with the Middletown Racial Justice Coalition. Founded in 2016, the Coalition has always focused on the racial disparities among local children, and has become a facilitator in hosting unfiltered conversations on race in workplaces as well as public dialogues among other community-oriented events.

“I’ve only been the director for about four days,” she said. “We’ve been trying to create a platform…to show that Middletown is very much a microcosm for the rest of Connecticut. For those of you who don’t know, Connecticut has the biggest Black/white achievement gap in the country, and Middletown’s numbers reflect that.”

Price has been passionate about this line of work since a very young age.

Upon returning to graduate school to pursue a degree in social work, Price became frustrated with the constant silencing of both voices of color in University of Connecticut (UConn) classroom discussions and of conversations on race more generally in academic settings.

“It got so bad to the point to where the people of color at the UConn School of Social Work kind of rioted in a way,” she said. “We had student teach-ins where we taught each other and we taught ourselves about race. We called in our professors and the school’s administrators.”

Since graduating from UConn, Price had been active in many Middletown community organizations, like the North End Action Team, before she was asked to direct the Coalition.

Recently, Price was called in to host a conversation and dialogue among students on hate speech at Middletown High School after a student was caught waving a Confederate Flag in the campus parking lot. Price facilitated an open forum that led to the development of a coherent list of demands, which participating students then brought to the administration.

“Before I even joined, one of the priorities of the Racial Justice Coalition has always been on education,” she said. “I was very blessed to be called into that space and work with the kids and hear them say, ‘We want to have conversations. We want to learn more about race. We want to have more teachers who look like our students.’”

Toward the end of the Q&A session, Burkley asked Price where she saw the most resistance in carrying out actions and duties at the Coalition and her work more broadly.

“The resistance comes from the people who are already doing this work,” Price said. “People who feel like all you have to do is be a nice person to be anti-racist, [saying], ‘I don’t have to learn anything about myself, I don’t have to learn anything about how I interact with others or how I could be a beneficiary or perpetuating racial stereotypes or white supremacy or power dynamics or any of that.’”

Price then offered a piece of advice for those trying to get involved with racial justice work.

“Be humble and be able to be open and know that this is a process for all of us,” she said. “There’s not one person that I can think of that has not been affected by white supremacy, that has not perpetuated superiority over others.”

To close out the conversation and the night, Rev. Burkley addressed the audience.

“You’ve soaked in so much through music, through historical presentation, and through contemporary conversation,” she said. “Let it mull over in your mind, let your deepmind work with it as you sleep and let it bring you forth to create the society that we all believe is possible. Even if we don’t see it in our lifetimes we must work for it now.”

Emmet Teran can be reached at eteran@wesleyan.edu and on Twitter @ETerannosaurus