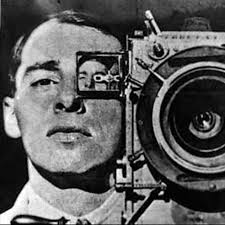 Dziga Vertov’s 1929 film “Man with a Movie Camera,” was screened at the film series this past Saturday. Though heralded as one of the pioneering works of the documentary genre, the film still remains unlike any movie today. It is a documentary about film itself, which partially accounts for why it holds up so well when compared to the modern popularization of meta-cinema tropes. The concept of making a movie without any actors, scripted lines, narrative, or sets was so revolutionary at the time that it had to be explained to the audience in the opening credits.

The film begins with a crowd filing into a theater to watch a movie—presumably, the same movie that we, the real audience, are watching. This meta premise forces the viewer to consciously recognize that they are watching a film, a motif that Vertov returns to throughout. The medium of film consequently becomes a subject matter within the narrative.

Taking place in an industrial Soviet town over a single day, the film is largely composed of short clips and jump cut transitions. With an average shot length of 2.3 seconds and piecing together over four years of footage, the editing imbues the film with a frenetic rhythm and sense of perpetual motion. While the rapidity of changing images and shots would seem to present chaos, the content of the film actually depicts a utopian vision of the potential for urban life and social cohesion under Soviet rule. By defamiliarizing the mundane life and perceived ugliness of the industrial environment and culture that’s sewn together by an upbeat soundtrack, Vertov calls to attention the formal beauty of a factory building and the physical movements of masses going about their daily lives. Vertov occasionally speeds up and slows down shots to illustrate the power of film, making the ordinary unfamiliar and harnessing the artistic potential of each cut.

In large part, the communist themes of the film are reflected visually through the lack of individuals that appear in the scenes. Instead, the shots are centered on large community gatherings. However, there is one recurrent individual: the man with the movie camera. By tracking the steps of the filmmaker making this movie, Vertov forces the audience to then consider who is documenting the filmmaker, again introducing a sense of consciousness that we, the audience, are watching a film. Rather than completely submerge its viewers into the internal world of the film, giving the illusion of reality, this film breaks with pure representation and enshrines a divide between the art and its audience. This awareness of the filmmaker and his camera remind us that the camera is the device that paints this idyllic social landscape.

As we see the filmmaker and his camera document the town from the vantage point of its average citizens, it becomes clear that this film encompasses the very essence and optimism of early twentieth century modernist thought. Civilization had undergone World War I which exposed the most violent, destructive potentials of human behavior. A cultural crisis followed, questioning how individuals could find social purpose and meaning in such a broken world. In response, “Man with a Movie Camera” posits that the camera, as an objective source, can allow us to escape from our subjective, chaotic natures and put together the pieces of our society into a harmonious new order.

Ultimately, the center of the film isn’t the filmmaker; it’s the camera. In a series of shots dispersed over the course of the film, which show the eyes of the filmmaker as he sees the outside world, disorder unravels as ephemeral and vertiginous clips quickly flicker across the screen, presenting the upheavals of the modern world spinning in the head of the filmmaker. The camera, on the other hand, offers a world of harmony and order. This juxtaposition, between society seen through the individual’s eyes versus the camera, demonstrates the camera’s power to create a new world, which is represented by specific scenes that superimpose two film clips upon one another, literally creating a new visual landscape.

Following the same theme, the final shot is of the eye of the filmmaker surrounded and ultimately consumed by the lens of the camera. Vertov continuously reminds his audience through these meta moments that the camera, the apparatus of objective enlightened truth, is organizing this utopia.

The essence of the film is embodied in one shot. Two men sit across from one another playing a game of chess. The clip runs in fast-forward and in reverse simultaneously, as their hands take a pile of chess pieces and put them into their intended order on the table. In reality, the hands took the chess pieces out of their order on the board and put them into a discordant mess in the middle of the table. But through the power of film (in this case to reverse motion), we instead are shown chaos being reorganized into order.

While the film perfectly captures both the despair and hope of a historical epoch, there is an eerie realization from our retrospective vantage point about the next phase in history to follow: The Soviet citizens in the film are about to experience the dark turn of the Soviet experiment under the reign of Stalin, leading to mass government-sanctioned murder and famine. They can’t foresee that in ten years the worst war in human history will take millions of lives, shaking the foundations of Western civilization. In both of these historical developments, film would become a weapon for oppressive, totalitarian regimes in Nazi Germany and the Soviet Union to control populations through propaganda.

Despite the innovative cinematography and experimentation with the capabilities of film, maybe this historical hindsight is why the optimism in “Man with a Movie Camera” seems artificial and naive.