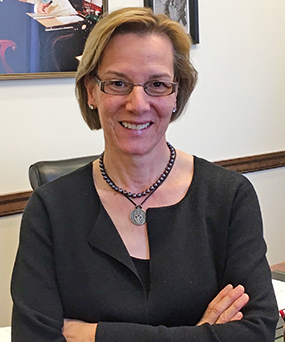 Judge Forrest earned her bachelors degree in Women’s Studies at Wesleyan before continuing on to the NYU School of Law, where she obtained her Juris Doctor in 1990. In 2010, United States Assistant Attorney General Christine Varney recruited Forrest to join the Department Of Justice as a Deputy Assistant Attorney General in the Antitrust Division. A year later, at the recommendation of Senator Chuck Schumer (D-NY), President Barack Obama nominated Forrest to fill a judicial seat for the Southern District Court of New York that had been vacated at the end of 2010.

During her tenure as a District Court Judge, Forrest has heard several high-profile cases, including Hedges v. Obama (2012) and United States v. Ulbricht (2015). Most recently, Judge Forrest ruled that the Constitution affords illegal immigrants the “right to say goodbye,” barring the federal order that called for the deportation of immigration activist Ravi Ragbir.

“I am very proud to note that this person is a product of Wesleyan University,” noted Chair of the Government Department Marc Eisner, before yielding the floor to Judge Forrest.

Forrest began her lecture by highlighting landmark cases concerning freedom of speech and underscoring the importance of protecting this fundamental right.

“The freedom of expression or the freedom of speech is not something that the mass of people in our society can take for granted,” Forrest said. “It is something that has been a hard and fought for right…. It is fundamental to our democracy and to the democratic process. There is real repression that is occurring relating to speech in this world and even in this country.”

Quickly flipping through headlines, Forrest presented story after story in which people were prosecuted as a result of their ideas or beliefs: a woman in Spain who made a Franco joke, an American arrested in Zimbabwe for a tweet about Robert Mugabe, Palestinian activists hunted by authorities, and a man not allowed into a voting booth because of the slogan on his shirt.

“The point is that this is real,” Forrest asserted. “There are real incursions on free speech that we think of as things that wouldn’t really happen.”

Throughout her speech, Forrest emphasized how uniquely important freedom of expression is to a democratic system, especially in the current era, when the press is constantly threatened by the most powerful political figures in the country.

“We’ve seen this before with the Pentagon Papers, and it’s something we can’t ignore,” Forrest explained of President Trump’s and the GOP’s assaults on the press. “Free speech is absolutely fundamental to a participatory democracy. It is, I would argue, one of the most critical components…because you’ve got to have people able to speak to each other, to be able to provide information to each other…. Otherwise, how can you have a representative democracy if you don’t know what you’re representing?”

Forrest believes the principles behind the First Amendment are particularly significant on college campuses. For her, that entails listening to people and giving them the opportunity to talk, even if someone doesn’t agree with their ideas.

In Forrest’s opinion, free speech is under attack on many college campuses, an idea on which one student voiced skepticism.

“Putting aside what may happen among a small group of students at what might be typically thought of as very liberal institutions like Berkeley, etc., do you see any evidence or data that suggests that this is actually a widespread problem?” asked Aaron Stagoff-Belfort ’18.

Forrest suggested reading Chemerinsky and Gillian’s “Free Speech on Campus,” which she believed to be a good example of the kind of attacks on free speech that have occurred on campuses recently. Whether or not they agree with her, Forrest urged students to think carefully about their behavior regarding the opinions of others.

“When [college students] are thinking about free speech, [they must] remember history, remember democracy, know the implications, proceed with care…. [and] ignore the crazies,” she concluded.