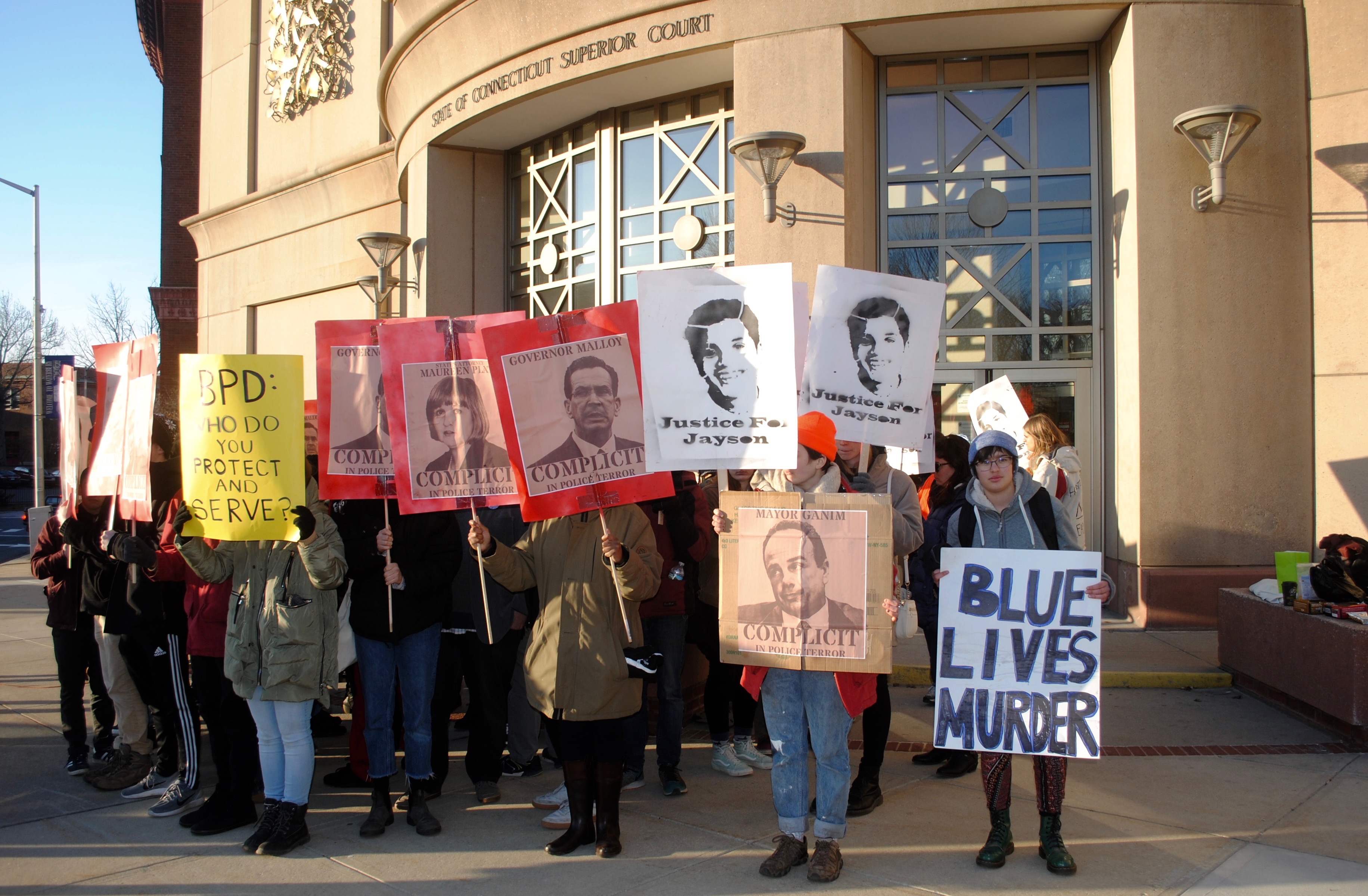 On the afternoon of Friday, Jan. 26, local protesters, along with a smattering of Wesleyan students, gathered outside the Waterbury Superior Court house to await State Attorney Maureen Platt’s announcement on an indictment in the shooting of unarmed fifteen year-old Jayson Negron of Bridgeport. After an hour-long consultation with the Negron family, the Attorney’s office announced that Officer James Boulay was found justified in his use of deadly force and will not face criminal charges.

Following the announcement, demonstrators—many carrying signs reading “Justice for Jason”—condemned the decision. That evening, community leaders organized a protest in Bridgeport, attended by over 350 people.

The incident in question took place in May of last year in Bridgeport after Boulay followed a vehicle reported stolen into a Walgreens parking lot. After a brief chase, Boulay pulled the vehicle over and attempted to apprehend Negron, who was driving the car with a friend of his who was riding in the passenger seat. While the events that transpired within this window of time remain unclear, the police account stated that once Boulay tried to forcibly pull Negron out of the vehicle, he began to accelerate the car in reverse which started to pull Boulay underneath the speeding car, causing him to shoot Negron out of fear for the safety of his life.

“[Boulay] stated that he was in fear of being dragged under the Subaru being operated by Jayson Negron and discharged his weapon only after he had been struck by the vehicle and believed that he was about to be subjected to serious bodily harm,” State Attorney Platt wrote in her 29-page report. “However, while there are differences among the witnesses, there are many factors that clearly support Officer Boulay’s statement.”

The case, however, has proven to be more complicated than initial police reports claimed. Several discrepancies emerged in the months leading up to the State Attorney’s review of the case. The Bridgeport Police initially said that Negron was shot in the head and died instantly, yet video footage taken by bystanders contradicted the police report by showing Negron’s head move from side-to-side as he lay on the ground moments after being shot. The release of these videos brought up more questions about whether or not the medical treatment offered to Negron after the shooting could have been expedited, and possibly have saved his life. Police forces at the scene claimed they called for medical attention immediately and that they told the paramedics to hurry five separate times. The report alleges that Negron laid on the sidewalk for nine minutes before an ambulance arrived.

Another point of contention for activists at the protest was that a Walgreens security camera had captured the incident on tape, but has not been released to the public.

“Walgreens has the history so why haven’t they released it?” Justice for Jayson organizer Jeannia Fu said. “If they have confidence in their investigation why haven’t they released the video to speak for itself?  Why not give the family some sense of understanding? They have withheld key information from the public and from the family. It has been nine months and they have not released the video or the autopsy report and you have to wonder why. The family has not received a death certificate.”

For activists and protesters, the Jayson Negron’s case is emblematic of a year filled with numerous high-profile cases of police violence against black and brown residents across the state of Connecticut, none of which have lead to indictments of police officers.

“Bridgeport PD have continued to engage in dangerous high-speed pursuits like the one that killed 61-year-old Susan Tomcyzk, and seriously injured two other bystanders on August 10th,” the Justice for Jayson organization page stated. “Neighbors reported that even when they are not chasing suspects, police have been known to drive down their residential street at speeds exceeding 70 miles per hour…. When Bridgeport police take action to shield the evidence of their brutality from public view and, at the same time, continue engaging in high-speed chases that put community members at risk, we question the department’s commitment to public safety and respect for a community in mourning. Bridgeport’s experience with police violence is shared by cities across Connecticut and the United States. This pattern of state-sanctioned violence is a manifestation of institutional racism and white supremacy and must be stopped immediately.”

While officer Boulay has been on paid administrative leave since the shooting, activists are calling for his removal. According to an aide for State Senator Edwin Gomes, Boulay was brought back onto the force briefly but was then put back on leave again after having a mental breakdown.

“There have been too many questionable police-civilian outcomes across the country, and working on increased transparency and different approaches to interaction will increase safety for everyone,” State Rep. Christopher Rosario, a Democrat from Bridgeport and chair of the Black and Puerto Rican Caucus, told the Hartford Courant. “We need to start a process and real conversation that includes accountability, law enforcement, the public, and legislation if need be — we need to address this pervasive nationwide issue now.”

For community activists and Wesleyan organizers alike, the case is not over. They plan on pushing for the case to be reopened by the state’s Criminal Justice Commission, which appoints state’s attorneys.

“We are going to keep pushing on this,” Fu said. “We are going to go up to the criminal justice commission, which is a group of six people who have discretion over the chief state’s attorney because we believe that Kevin Cain, the chief state attorney, has also been colluding with the Bridgeport police force. So we are demanding that the case be reopened by the criminal justice commission.”

Luke Goldstein can be reached at lwgoldstein@wesleyan.edu