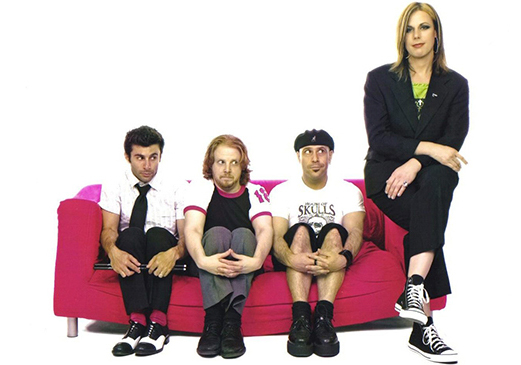 New York’s glam rock star Lisa Jackson and her band Girl Friday have returned this weekend after an 11-year hiatus for two sold-out charity shows at the Ars Nova in Hell’s Kitchen. The group—which features Jackson on lead vocals and guitar, Steve Lavner on keyboard, Jeff Gurner on bass, and Freddie “Boom Boom” Sanchez on, unsurprisingly, drums—initially broke out onto the New York music scene in the early aughts, playing a punk rock sound with lyrics challenging gender and societal norms. Their first performance took place this past Saturday, and Monday night might be the last chance ever to see Jackson and her band. The Argus conducted a phone interview with Jackson to talk more about the importance of glam rock, the experience of bringing the band back together, and the necessity for visibility in the gender-nonconforming community.

The Argus: What was it that made you come back to do these shows?

Lisa Jackson: The real story is that my wife is turning 30 this year and I said to her, “What do you want for your birthday?” and she said, “I want a Lisa Jackson Girl Friday show.” [laughs]. So I said okay but was very nervous about it because it had been a long time. But things started progressing and it all came together very quickly.

A: A lot of your songs include powerful social messages. Was the current political climate also a factor in these shows?

LS: My wife and I both live in D.C. and we’ve become very politically active since the election of Trump. We’ve gotten involved with our community action group and an organization called OUR Restroom, which is focused on having non-gendered signage on restrooms. It made me realize that my band had really developed a very solid voice for trans women and trans people. Over the course of rehearsing, I realized that we have a gift in all these songs we’ve created. Trans people need to be very visible right now, given the current political climate, and so I thought I should use this as a platform to bring awareness.

A: Proceeds from these two shows will go to the Transgender Legal Defense and Education Fund, correct? That seems like a great cause.

LS: They have several services they do for trans people. One of the ones I find most important is the Name Change Project, which helps trans people through the legal process of changing your name on all of your documents. That can be a little overwhelming; I did it twelve years ago. It’s really nice to have an organization that provides lawyers, pro bono, to help you work through it all.

A: So your music genre is, at least in part, glam rock, where musicians embrace gender-bending and a level of theatricality in their performances (e.g. David Bowie, Jobriath, New York Dolls). When did you first get involved in this style?

LS: I grew up in the ’80s, so a lot of my influence came directly from MTV and the big stars: Michael Jackson, Madonna, Boy George, and the hair bands of Van Halen and Mötley Crüe—so they weren’t glam rock, mostly. But my older siblings were listening to everything from the ’70s, which included Bowie—who was more in his glam rock decade then, I would say. I don’t know that I was super aware of his influences, though, until I started transitioning and identifying more as a queer person. I think glam rock for me is about pushing social norms and expressing yourself in fun or flamboyant ways that may or may not make a statement, you know?

A: It’s amazing that all four original band members were able to come back together after almost a decade of separation. How has that been?

LS: It’s been really really satisfying. We were unfortunate in [that] we had a very cliché rock and roll break up where we all got mad with each other and didn’t speak for close to ten years. It got to the point where we really didn’t know why we didn’t speak to each other. We just didn’t. Now I think everyone has such a different perspective on what we created together and such an appreciation for it that it’s been a lot of fun to get our relationship back with each other.

A: Will these really be your last shows, the last chance ever to see you perform?

LS: It’s a question that everyone is asking because the shows literally sold out in a matter of two weeks. The response has been really great, but I think right now we’re super happy that we’re doing this and that the venue and the fans are so into it that we do not have any plans of future shows. I think it puts it out there for us, though, that if we want to do a show, it’s definitely there for the taking. I would say ask me again on Tuesday morning, and I might have a more solid answer [laughs].

A: What has this experience of bringing the band together meant for you personally?

LS: As I do this again, I’m remembering that for me this whole band Lisa Jackson + Girl Friday was a platform to transition and during the time that I was doing that, I don’t think I quite understood me or what was happening for me. And so, for any people out there who are non-gender conforming, I just wanted to express my gratitude for their experience. It’s a tough row to hoe sometimes, and I’m grateful for the opportunity to get on stage again and be a visible presence for trans and non-gender conforming people. It’s a very unfortunate time with the current administration and the attitude that we see in America. We have to stick with and stick up for each other right now.

Andrew Fleming can be reached at apfleming@wesleyan.edu