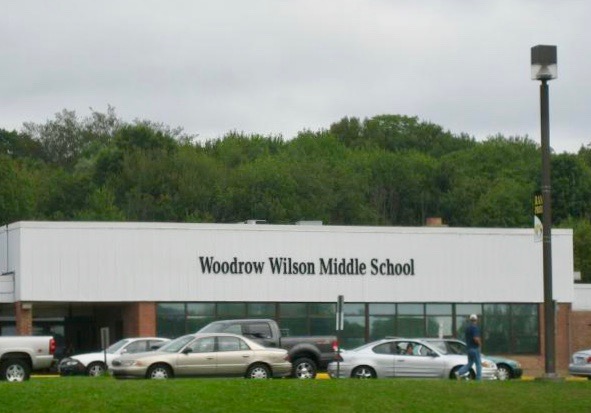 Last semester, a collaborative project began between the University and local school district officials to bring on students from Wesleyan Spanish courses as tutors for English Language Learning (ELL) students in their classes at Woodrow Wilson Middle School. While the program began small, with only 10 tutors, it has since more than doubled size and has solidified its status as a key outreach program with the Middletown community.

The idea for such a collaboration had been discussed for years in the district, according to the Woodrow Wilson’s ELL Department Chair Linda Johnson, but it was Adjunct Professor of Spanish Ana M. Pérez-Gironés who finally brought it to fruition.

Pérez-Gironés’ inspiration for the project came after seeking volunteer opportunities for her Spanish students to serve the Middletown community using their Spanish language skills. After reaching out to Peggy Carey Best, Director of Service Learning at the University, and Johnson at the middle school, Pérez-Gironés realized this visiting tutors plan was perfect not only for her heritage speakers but her language-learning students as well.

“It immediately was so appealing and exciting,” said Pérez-Gironés. “It quickly went beyond my Spanish for heritage speakers class and I opened it for whoever wanted to volunteer.”

Pérez-Gironés also noted that the enthusiastic support of Professor Typhaine Leservot, Chair of the Romance Languages and Literatures Department, was key to lifting the program off the ground.

Johnson and Pérez-Gironés began organizing the project at the beginning of last semester, a task which involved learning a myriad of volunteer protocols as well as getting background checks for each student who would go to the middle school. Furthermore, the two had to figure out how to make the University’s short academic calendar align with the complex block scheduling system of Woodrow Wilson.

They began the project in March, sending in only a handful of tutors who would be a prototype for years to come. Participating students were shuttled to and from the middle school for one hour and 40-minute shifts once a week. While the launch was successful at matching up tutors and ELL learners, the two groups struggled at first to overcome awkward social barriers (the middle school students did, after all, suddenly find themselves with towering undergrads following them around the halls).

Fortunately, this tension has already begun to fade as the students and tutors have bonded over time. In fact, Woodrow students were invited to campus at the beginning of the semester for a pizza lunch.

“The more time they spend with each other, the more comfortable they become,” said Johnson. “It is reassuring for the English Language Learners to know that there is someone who can help explain things in their own language.”

In an interview with the Argus, Wesleyan student coordinator of the program Phoebe Howe ’18 expressed how glad she was to see the students’ growing ease with one another. She joyfully recalled how, during the lunch meeting, students and tutors went around the room and talked about what languages they spoke and what excited them about the program. Howe began working to help coordinate the program alongside Pérez-Gironés and Johnson towards the end of last semester and has been essential to its increasingly smooth operation.

“Both Phoebe and Ana [Pérez-Gironés] have gone out of their way to find qualified people to work with our students,” Johnson said. “Both are responsive to our needs and really dedicated to creating a positive experience both for the Wesleyan students and our English Language Learners.”

After assisting with the establishment of the program, Howe looks forward to how it will continue to grow from its small group of passionate organizers.

“I’d love to see it stick around for awhile,” Howe said. “The good thing is we’re staying patient setting a solid foundation, getting a couple of really good dedicated tutors going in the program and hoping to expand from there, and hopefully all the kids who need us get help.”

Howe also noted that University tutors have received their own sign-in sheet when entering the middle school, indicating their growing presence.

Now that the program at Woodrow Wilson is up and running, its organizers are looking for ways to expand it, and not only with more Spanish-speaking students. Howe described how she, Johnson, and Pérez-Gironés teamed up to match an ELL student who speaks Tamil—a Dravidian language spoken by the Tamil people of India and Sri Lanka—with a University student who speaks a similar dialect.

The three are also seeking ways to go beyond the middle school and spread University tutors throughout the school district.

“There is such a need for language help in all of our schools…elementary through high school,” Johnson said. “It makes sense to start our partnership growth with the high school and then expand out to the elementary schools. I am hoping that we will be able to accomplish this within the next year or two.”

As Howe is stepping down next semester, it will be up to current tutors like Vanessa Baker ’20 to help achieve these goals. Baker looks forward to stepping up as the student coordinator next semester.

“The tutoring program has been wonderful this year,” Baker said. “I have loved getting to know the students and watching them grow throughout the semester. I am looking forward to continuing the program and hopefully helping it get bigger and more established on our campus. The role of the tutors has the potential to be extremely impactful, and I hope as I continue with the program I can help it to grow.”

In addition to this program at the middle school, Pérez-Gironés has also set up a course for next semester where students will be able to earn credit and receive a more formalized understanding of language pedagogy. Her Second Language Pedagogy for Grades 8-12 (SPAN 412/FREN412) class next semester will allow students to work with teachers at the local high school identify authentic materials for them to use in their classes.

Programs like these are and will continue to build important ties between Middletown schools and the University. The work of Johnson, Howe, Baker, and Pérez-Gironés not only breaks down linguistic barriers in the classroom, but also the rigidly separate worlds of the public school system and the private university, encouraging the open sharing of resources.