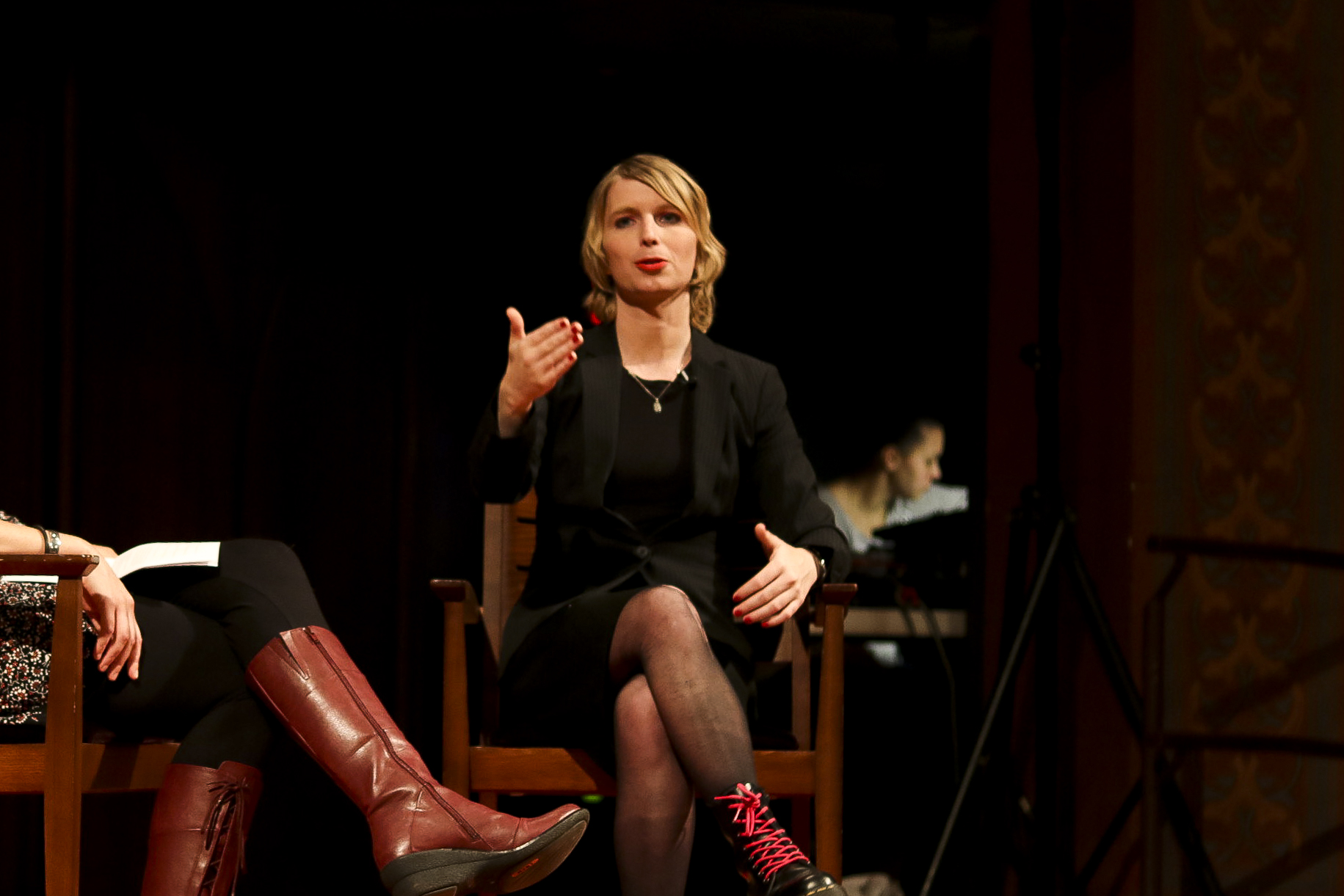 On Wednesday, Nov. 15 at 7:00 p.m., a sold-out audience in Memorial Chapel attended “A Conversation with Chelsea Manning.” Department Chair and Professor of Anthropology Margot Weiss moderated the event, which was simulcast in Beckham Hall.

Manning is an advocate for government transparency and transgender rights, and she is a fierce critic of what she calls a “vast police and surveillance state.” She has identified as a trans woman since 2010 and asserted legal rights to appropriate medical treatment while imprisoned. 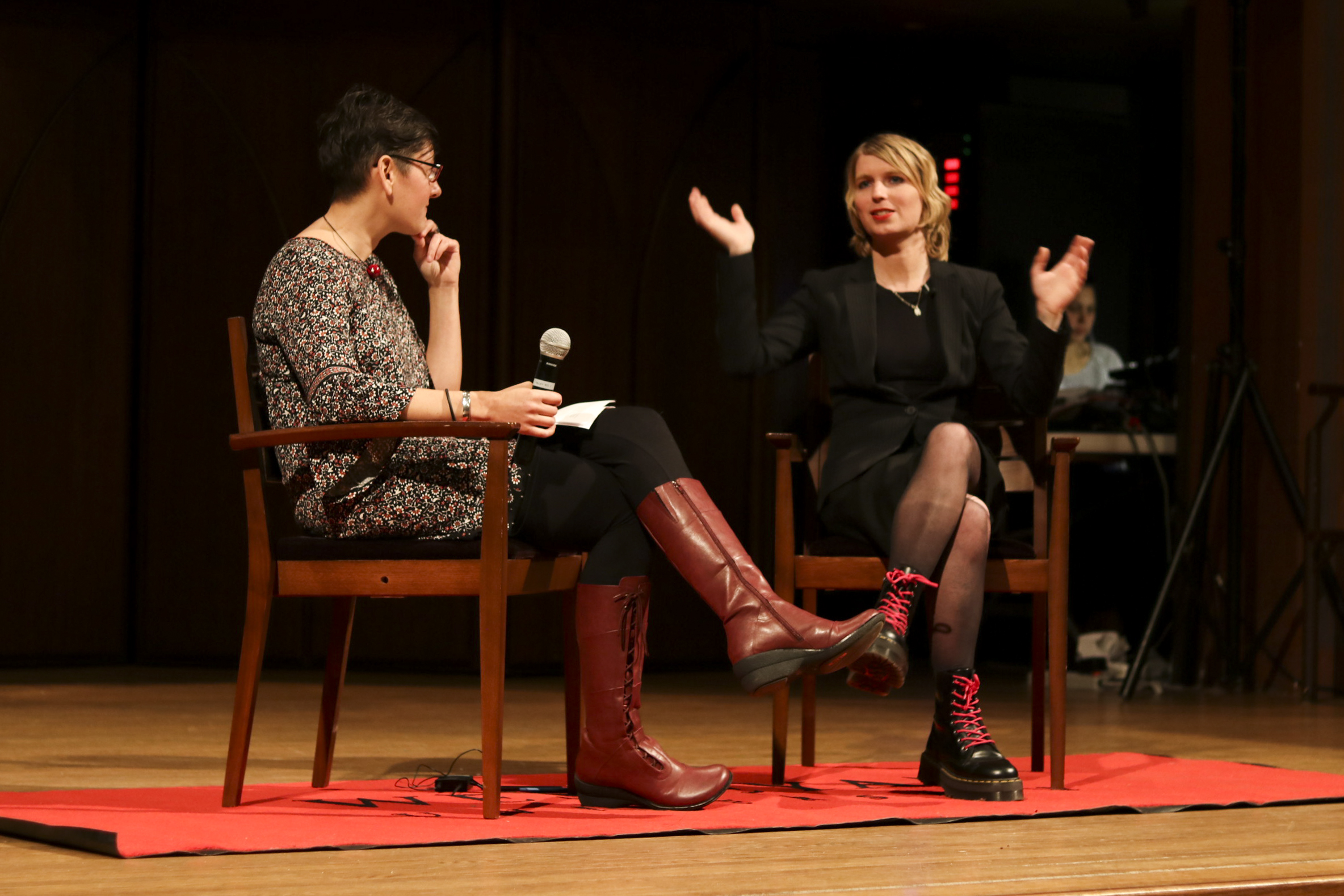 In 2010, while serving as an Army intelligence analyst, Manning illegally disclosed more than 700,000 government documents to Wikileaks, which then published the materials in full. Government officials criticized the release of the documents, but a 2011 report prepared by the Department of Defense and more than 20 federal agencies undermined concerns that the disclosure released information that compromised officers in the field. Manning was charged in 2013 under the Espionage Act, pled guilty to 10 offenses, and was sentenced to 35 years in prison. After serving seven years in a military prison, her sentence was commuted by President Obama in January 2017 before he left office.

Manning is also known for tweeting “#WeGotThis” to the more than 300,000 followers she has on Twitter, a mantra she said she adopted while imprisoned for seven years, sometimes while being subjected to solitary confinement. 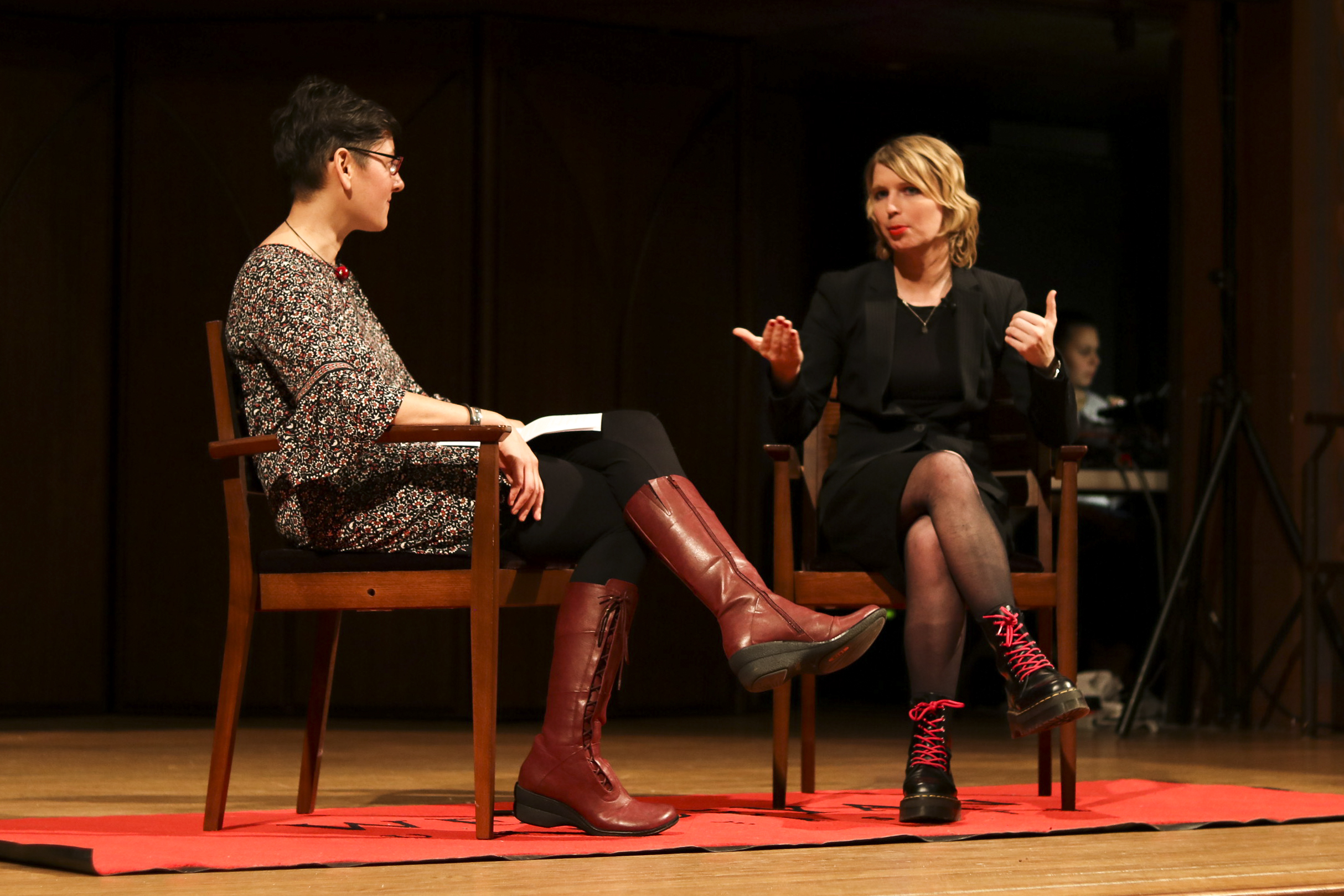 The talk, however, did not address Manning’s leaks, government transparency, or whistleblowing. It instead explored the status of trans people in relation to incarceration and the state, the militarization of domestic police forces, global warming, and the military’s influence on academia, among other topics.

It began with Manning’s release from prison and the difficulties she encountered with documentation as a trans woman.

“[The government] doesn’t contemplate the existence of people that exist outside of the [given options]” Manning said. “Any queer or trans person when filling out checkboxes on digital forms has two options. And that option is not you. That’s a big problem with the surveillance state that doesn’t contemplate other possibilities.”

“It’s a continuum, whether we’re in prison, or schools, in the bathrooms in some states,” she said. “We’re constantly being policed and judged and harassed through these policies. I call it administrative bullying. It’s a real phenomenon.”

Manning expressed frustration at the general lack of understanding she’s encountered regarding the needs and experiences of trans people, particularly on the issue of gender affirmation treatments.

“It’s not an optional thing,” Manning said. “That’s a fight for existence. It’s not a fight over a political issue that’s theoretical, that is optional, distant, or abstract.”

She offered a critique of subsuming queer and trans rights under what she considers an overreaching state that fails to adequately provide for its vulnerable people.

“Yeah, I can marry a woman now,” she said. “That’s a possibility as a trans woman. But in 2006 whenever I was homeless, and I lived homeless for six months in Chicago, I didn’t have anything. Marriage equality isn’t going to help me in that situation … it didn’t feed me; it didn’t provide shelter for me. It doesn’t do anything.”

On the topic of the environment, Manning warned that the profit motive has corrupted efforts to address the effects of climate change. She also criticized the practice of greenwashing, the process by which an otherwise suspect organization advertises itself as environmentally friendly.

“One concern I have is a ‘green military’ or ‘green prisons,’” she said. “I’ve heard the term ‘greenwashing,’ where we basically rebrand an institution as being environmentally-friendly, terrible institutions…I really want to avoid the idea that we can somehow have an environmentally friendly police state. That’s a bad idea.”

Manning echoed a similar statement with respect to sexuality.

“The solution…is not more gay cops,” she said.

Manning also mentioned that in the time between 2010 and when she left prison in 2017, local police forces have increased their use of military-grade equipment.

“I got out [of prison] and I was just like, ‘Oh, God! What did you guys do?’” she said. “I see equipment from Iraq and Afghanistan on American streets…All the things I was afraid of happening [are happening].”

Manning believes that recognition, collective action, and morale are essential to implementing change and combatting the forces of what she believes are aspects of a coercive American police state.

Weiss later asked her about the “academic-military-industrial complex.” Manning expressed skepticism at collaborations between governments and academic institutions. She reminded the audience of those which have contributed to civilian deaths, such as the Manhattan Project.

“[Research universities] can use students as cheap labor to design and develop new ways of killing people,” she said. “It’s always resold and repackaged in a way, but whenever certain projects are used and the government has an interest, it’s not always for the interest they’re presenting.”

Manning also joked that she had some personal experience with academia’s suspect partnerships with the federal government. In September, a Harvard University dean revoked her visiting fellowship offer at the Kennedy School of Government. The revocation followed a firestorm after Manning’s planned appearance at Harvard was announced. C.I.A. Director Mike Pompeo withdrew from a campus event and former C.I.A. Deputy Director Michael J. Morell resigned from his Harvard post in protest.

“The deepest insight that I had from what [Kennedy School graduate students] had to say was that … they thought they knew what Harvard was,” Manning said. “[And Harvard’s decision] has made them rethink that…I think it says a lot about that school.”

Alice Markham-Cantor ’18, a student who helped organize the talk, said she enjoyed the event.

“I feel really good about it,” said Markham-Cantor. “I feel like it was great that we touched on so many topics, because all of these topics are related, all of these systems of oppression interact with and in many cases rely on each other, and it’s really important as students who are beginning to learn about them…to pay attention to that fact, to see where they intersect, and to be able to more accurately identify what’s going on around them.”

Others reacted more negatively to the discussion, expressing a range of emotions from ambivalent feelings of missed expectations to outright disappointment. Matthew Renetzky ’18, a government major, wished he had gotten more out of the conversation.

“For me what I find most fascinating is the whistleblower [issues raised],” Renetzky said. “I think that begs the most ethical questions and would have made for a much greater talk, although I realize legal restrictions were a factor. I just felt she was underwhelming.”

Government major Catie Cervone ’18 was attracted to the event because it offered University students a rare opportunity to hear from someone who has been indicted under Espionage Act charges. However, she also expressed disappointment with the talk.

“I was disappointed to see Ms. Manning let her unique platform go to waste,” wrote Cervone in an email to The Argus. “She made sweeping accusations about the ‘police state’ and simply substantiated her claim by saying, ‘There are security cameras everywhere.’ I think she talked a lot, but said very little.”

“I thought that her experiences that she spoke about from after she was released from prison gave a lot of valuable insight into the systemic biases that trans people face,” Cantos wrote in an email to The Argus. “[But] I didn’t think she gave any clear roadmap for how we as a society can change this aspect of the country in which we live. She kept saying that we can’t just say, ‘We don’t want to live in a police state’…but she didn’t say much by way of what could actually be done democratically.”

Other students, many of whom wished to remain anonymous, expressed disappointment at the absence of a question and answer section after the talk, and Manning’s general aversion to discussing the government documents she leaked.

Steven Kidder ’18, a Feminist, Gender, and Sexuality Studies and government double major, expressed disappointment with the range of topics addressed.

“Most of the students here at Wes are aware of the rise of the police state, the militarization of police forces, the troubling nature of our prison system, and the importance of community organizing,” Kidder wrote in an email to The Argus.

Kidder also echoed a commonly expressed sentiment leading up to the event: skepticism over the decision to allocate funding for Manning in the first place.

“I also believe that her visit here at Wes is a continuation of the white erasure of the experience of trans people of color,” he wrote. “Her story is important to hear, but I think that that $30,000 could have been better spent elsewhere. There are plenty of queer people, specifically queer people of color, who are doing tremendous work that could’ve used last night’s slot to really challenge and educate Wesleyan students.”

(The event organizers have informed The Argus that the funding for the event was actually less than $24,000, not $30,000 as Kidder suggested)

Correction: The original article did not note that Kidder’s belief that the event cost $30,000 was incorrect.