Students and Administration Clash in Assessments of Meal Plan Coverage 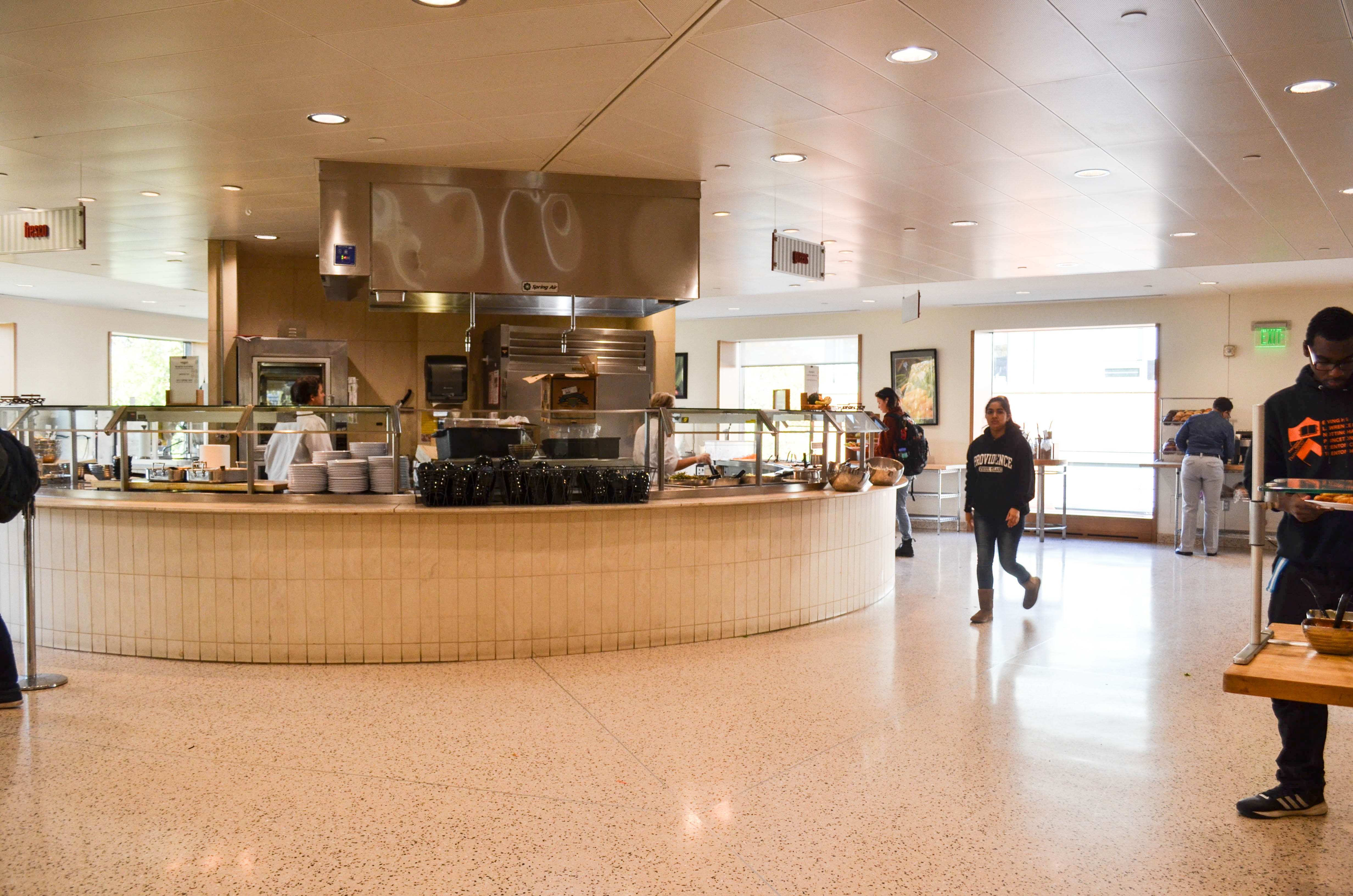 “Our wellbeing should come first,” said Esha Bhandari ’20, Wesleyan Student Assembly representative of the Dining Committee. “Once we get to a point where so many of us are so frequently concerned with how we’re going to eat, then that’s a problem.”

Despite ongoing changes to the University’s meal plan options, some students are still finding it difficult to get enough food.

Unlike other universities in the NESCAC, Wesleyan offers a variety of meal plans. Across the NESCAC, the majority of schools offer either unlimited or 19 meals per week to first year students. According to their respective dining services websites, Bates College, Bowdoin College, and Connecticut College require all first years to be on a meal plan with 19 meals per week; Colby College and Middlebury College provide all students a meal plan with buffet-style options for three meals each day; Trinity College automatically enrolls all first year students in a 19-meals-per-week plan unless changed by the student to accommodate their needs; and Williams College and Amherst College mandate that first years be on a plan that gives them 21 meals per week.

At Amherst College, meal swipes can either be used to get into a buffet-style dining hall or to purchase grab-and-go options, but cannot be used in the same dining period for both the dining hall and the grab-and-go.

For Amherst first year Sophia Friedman, the unlimited meal plan ensures that she never has to worry about finding food or being too hungry, she said. Friedman usually eats three meals per day, which is exactly what the meal plan accounts for. The complaints at Amherst surrounding food are mostly around the quality of the food rather than access to it. 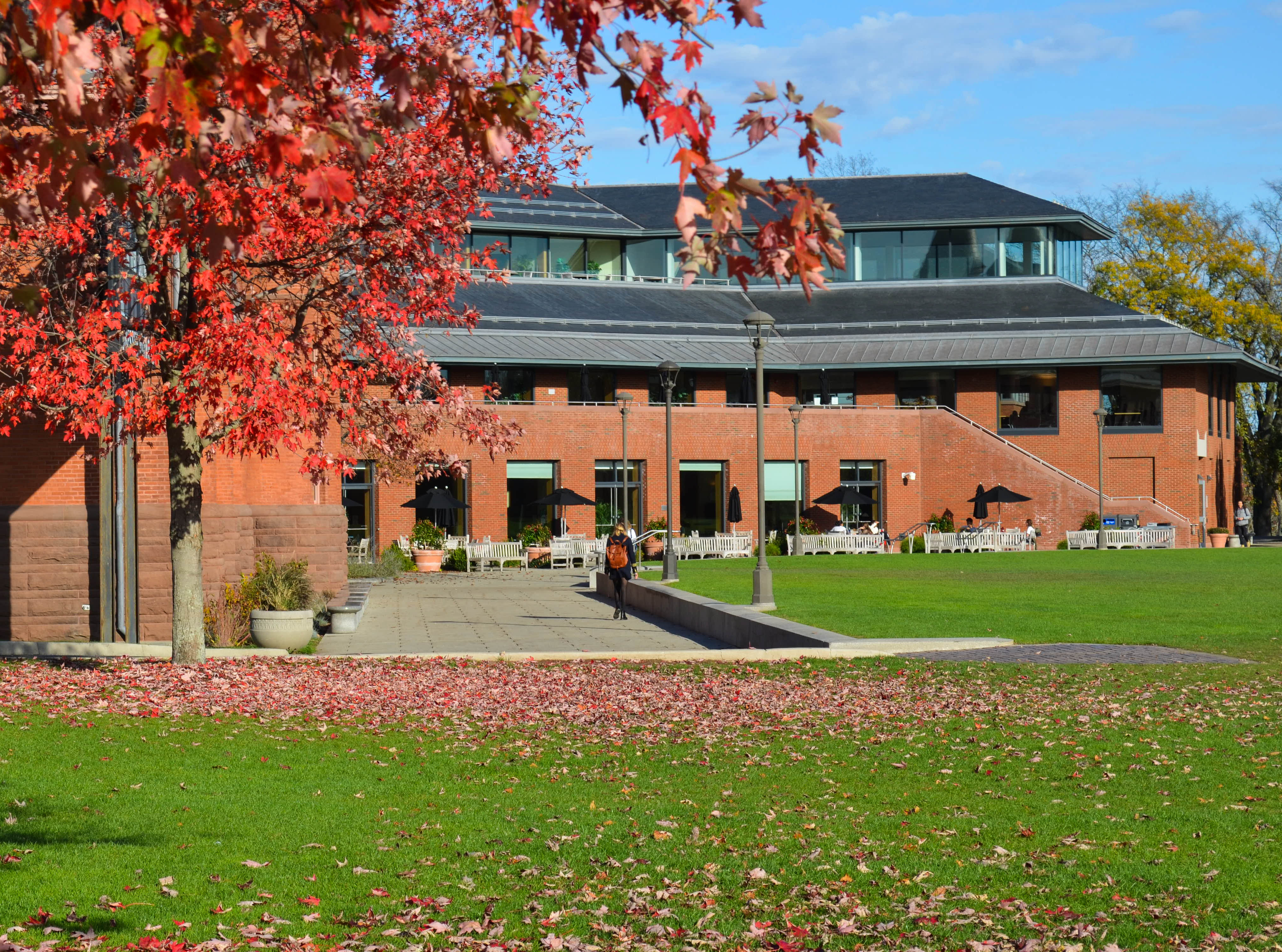 However, according to Director of Usdan University Center Dr. Michelle Myers-Brown, other NESCAC schools have reported having a 60 percent usage rate in their dining halls, meaning that only 60 percent of the food made each day gets consumed. The remaining 40 percent of food either gets thrown out or donated. Myers-Brown says that Wesleyan’s usage rate hovers consistently around 90 percent, meaning that much less food is wasted each day. In the past, students protested when more food was thrown out due to lower usage rates, so Usdan tries its best to limit how much food is being wasted each day.

Jordan Dunaway-Barlow ’20 runs for women’s track and field. As an athlete, Dunaway-Barlow has to make sure that each day she is getting enough healthy food, but she found this hard to do on her meal plan during her first year.

Dunaway-Barlow started her first year on the Block 165 plan. However, she soon realized that because she had such little time to sit down and eat meals, she quickly ran out of points and had to spend money putting additional points on her account. The next semester, she switched to the Block 135 plan to give herself more points per semester. But even with this plan, her budgeting could not keep her from running out of both points and meals with a few weeks left in the semester.

“I need at least two meals a day to feel like I’m getting enough healthy food for practice, and I couldn’t find any way to do that on either of my meal plans,” Dunaway-Barlow said.

Friedman is also an athlete, running on Amherst’s women’s track and field team. As such, being able to access enough food is very important to her.

“I always feel fueled for practice and never have to worry about getting enough food,” she said of her meal plan.

Jodie Kahan ’21 wrote an opinion piece for The Argus on Nov. 2 to discuss why she believes the meal plan is not sustainable for first years.

The impetus for the article came when Kahan and several of her hallmates discussed getting their receipts back after swiping into Usdan marketplace. Looking at the receipts, they realized that with their current eating habits none of them would have enough meals to last the rest of the semester.

Nick Catrambone ’21 also has this worry. Catrambone has run out of points this semester and has resorted to using Middletown Cash, the amount of which is predicated on how much money he is able to put in his account. Catrambone said that he no longer eats breakfast regularly.

“The reality is that I’d like to be able to eat three meals per day, but on my meal plan, there was no amount of budgeting that could have allowed me to do that,” he said.

Complaints surrounding Wesleyan’s meal plan options trace back to at least 2008. Stephanie Quainoo ’10 wrote an opinion piece published in The Argus stating that she ran out of points fairly early in the semester, forcing her to purchase upwards of $500 worth of additional points that, as a student on financial aid, was putting significant economic strains on her and her family.

Kahan also referenced the socioeconomic divide meal plans could provide as part of why she wrote her article.

Daniela Sweet-Coll ’21 also feels as if her meal plan exacerbates socioeconomic difficulties rather than equalizing them.

“If you run out of points, not everyone has the ability to add more to their accounts,” she said. “And getting food, as a basic human right, shouldn’t be something that people who are low-income consistently have to worry about.”

During Jennifer Gagné’s ’19 first year, their status as a low-income student necessitated that they learn early in the year how to budget their meals and points, they said. This meant that each day, they would only eat one meal a day: dinner at the Usdan Marketplace.

“I was very scared to use points, even for snacks,” Gagné said. “I spent a lot of my points actually sending boxes of food home instead of using them on myself. It’s weird to think that I can survive off of so little food now, but I’m just used to it.”

For Myers-Brown, having a small period of time in which students figure out how to most effectively use their meal plans would be ideal.

“The beauty of a cumulative system is that eventually, you’ll figure it out, and there’s no harm no foul,” she said.

The cumulative system Myers-Brown refers to is one where meals and points roll over from week to week. Myers-Brown also rebutted a point in Kahan’s article that states that students may not take food out of the Usdan Marketplace. In reality, this is encouraged and is an effective way to get enough food each day, Myers-Brown said.

Tufts University requires that all first years have 400 meals per semester or about 23 meals per week. For Tufts first year Grant Gebetsberger, not having to worry about meals helps the social adjustment to college.

“Having an unlimited meal plan helps first years bond with each other because getting a meal together becomes an easy, accessible way to connect with people,” he said. “It’s really nice that, during this period of adjustment, we don’t have to worry about cooking, funding, or availability.”

For Sweet-Coll, more education on how to effectively use her meal plan would have helped her not run out of both points and meals.

“If there were some sort of orientation or instruction on how to go about using my meal plan, it would have been a lot more helpful,” she said.

Myers-Brown ends up seeing a large number of students every year who come into her office not knowing how to use their plan. The students then go to her office and she instructs them on how to ration their meals and points in a given week.

“Most students end up figuring it out, but there are systems in place for the 30 or 40 outliers each year who get a call from their Dean,” she said.

Myers-Brown also pointed out that Wesleyan’s website provides a spreadsheet that states how many meals and points one should spend per week to not run out of either in a given semester.

Gagné thinks that some discussion of the meal plan would have been a helpful addition to New Student Orientation for incoming first years.

“To have some real conversations about it and put it on the table that we’re not going to be able to eat three meals a day, and sometimes not even two, but we have to learn not to starve ourselves like I did would have been really, really helpful,” Gagné said.

However, one of the hardest parts for Myers-Brown is that eating is extremely personal, which is part of why meal plan discussions are so complicated, she said. While some students would rather sit down at the Marketplace each day, others only have time to grab food to go at Pi Café.

“No, it’s not going to be the best thing for every single person,” Myers-Brown said. “But years of data have shown that what we have is best for the vast majority of students.”

Myers-Brown cited a survey taken each year in which seniors are asked their opinions on the Wesleyan’s dining services, and each year the approval rate consistently stays at around 80 to 90 percent, while most schools have an approval rate of around 60 percent, she said.

The University’s Dining Committee recently voted to enact a three-year program that increases the number of points on each meal plan each year; the 2017-2018 school year is the second year of the plan.

The Dining Committee, which is comprised of staff and some students, handles all inquiries about the meal plan, including possible changes.

“What’s unique about Wesleyan is that its dining plans have been developed by students with the administration, and any adjustments have also come from students on the Committee,” Myers-Brown said.

According to WSA representative Bhandari, the Dining Committee is still discussing increasing points past the three-year program, but is aware that a larger increase in points would still mean a decrease in meals. However, the committee agrees that students should not have to be worried about food.

“It’s fine to learn budgeting, but there are so many other things that we’re worrying about and this shouldn’t be one of them,” Bhandari said.

Although the combination of points and meals that a student has each week, regardless of which plan they are on, does not ever allow for three meals per day, there are ways to make up for this, according to Myers-Brown. An example is using one day’s point allotment to buy milk and cereal at Weshop, which will then serve as breakfast for a whole week and will save subsequent days’ points, she said.

However, for Sweet-Coll, having to spend time figuring out how to make her meal plan work shouldn’t be something that she should have to go through as a first year.

“There are so many other adjustments we’re making right now in coming to college, and having to figure out how to eat shouldn’t be one of them,” she said. “It seems unnecessary.”

“You come to campus and you have to learn how to do laundry, how to get yourself up for class, and learning how to budget is the same,” Myers-Brown added. “I know it feels like a hassle, but that’s part of coming to college.”

Having worked at other schools that have 21-meals-per-week systems, Myers-Brown found that other students become unhappy with the lack of flexibility they have regarding their food, she said. Kahan, in her article, saw things differently.

“My situation of simply not knowing if I’m going to have access to enough food just begs the question of if I’m being completely ripped off or not,” Kahan said.