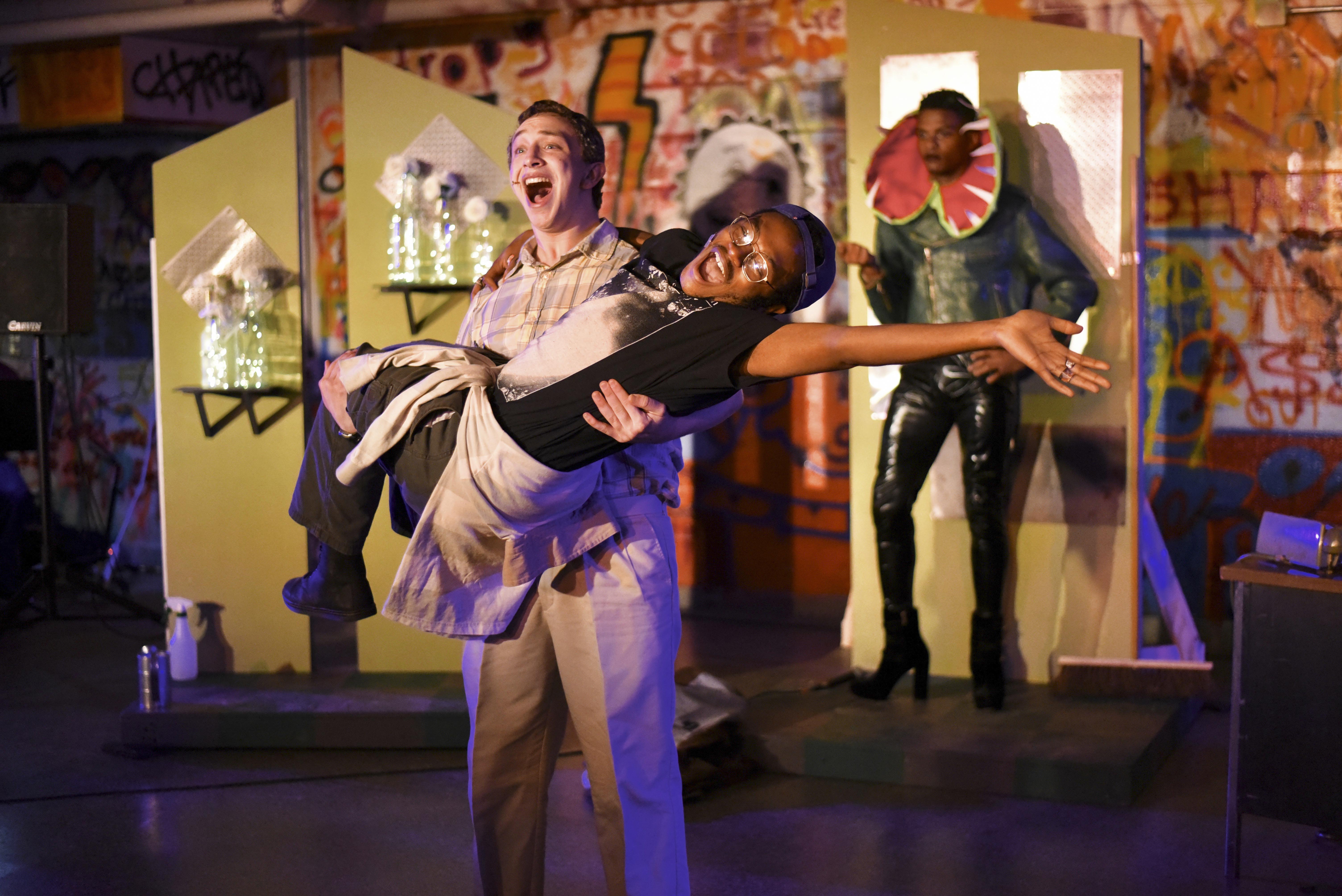 What do a sweet romance, a sadistic dentist, and a man-eating demon plant have in common? At first thought, probably not much. However, they’re all integral parts of Second Stage’s production of “Little Shop of Horrors,” showing at the WestCo cafe this weekend. This production is directed by Sophie Brett-Chin ’19 and stage managed by Amelia Spittal ’18. Sophie Elwood ’20 is pulling double-duty as Assistant Director and Assistant Stage Manager.

The play follows the story of a small New York flower shop on Skid Row, where a curmudgeonly shop owner, a sweet but sad girl, and an adorably awkward boy try to make a living. When the boy, Seymour, discovers a new and interesting species of plant that gives him fame and fortune, he finds the cost to be far greater as its thirst for blood grows. As the plant buds, so does a love between Seymour and his co-worker Audrey.

The show also covers Audrey’s abusive relationship with a sadistic dentist and her escape into Seymour’s gentle love. With a plethora of multifaceted issues and a powerful score sure to have you dancing and singing along, this production is a must-see. 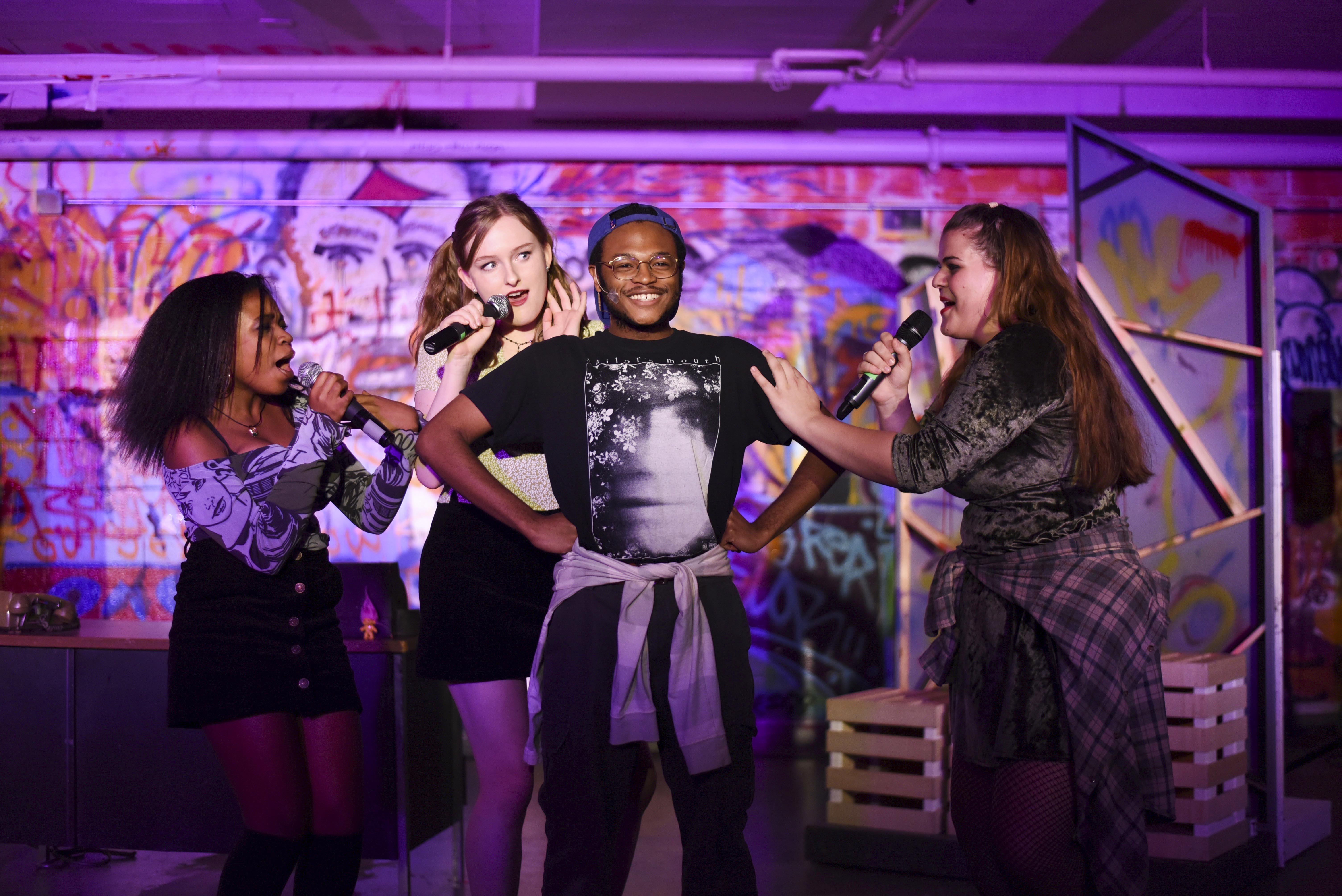 The show opens with three street urchins (Imani Crews ’21, Thea LaCrosse ’21, and Polly Pierone ’20), who immediately launch into a high-energy number reminiscent of a ’60s girl group. The voices of these three actresses blend seamlessly, creating a powerhouse of sound and harmony. This compatibility continues throughout the show, and each actor’s voice complements the others in stunning vocal juxtapositions. The chill-inducing belting range of Avery Pedell ’21, who plays Audrey, is rivaled only by Christopher Desanges ’20, who plays Seymour. Meanwhile, the walking tower of leaves and sex that is Audrey II (Cameron Smith ’21) has a smooth, velvety voice like a young Leslie Odom Jr. The band is on fire, with perfectly coordinated and catchy accompaniment to the excellent vocalists.

While these songs add lightness to the seemingly fantastical plot of “Little Shop,” the play covers real issues relevant to our lives.

“The benefit of this show is that it’s kind of really insane, and we live in such a crazy, weird world right now where everything is kind of insane and not real,” said Brett-Chin. “It’s fun to play with that and mock it, but also escape.” 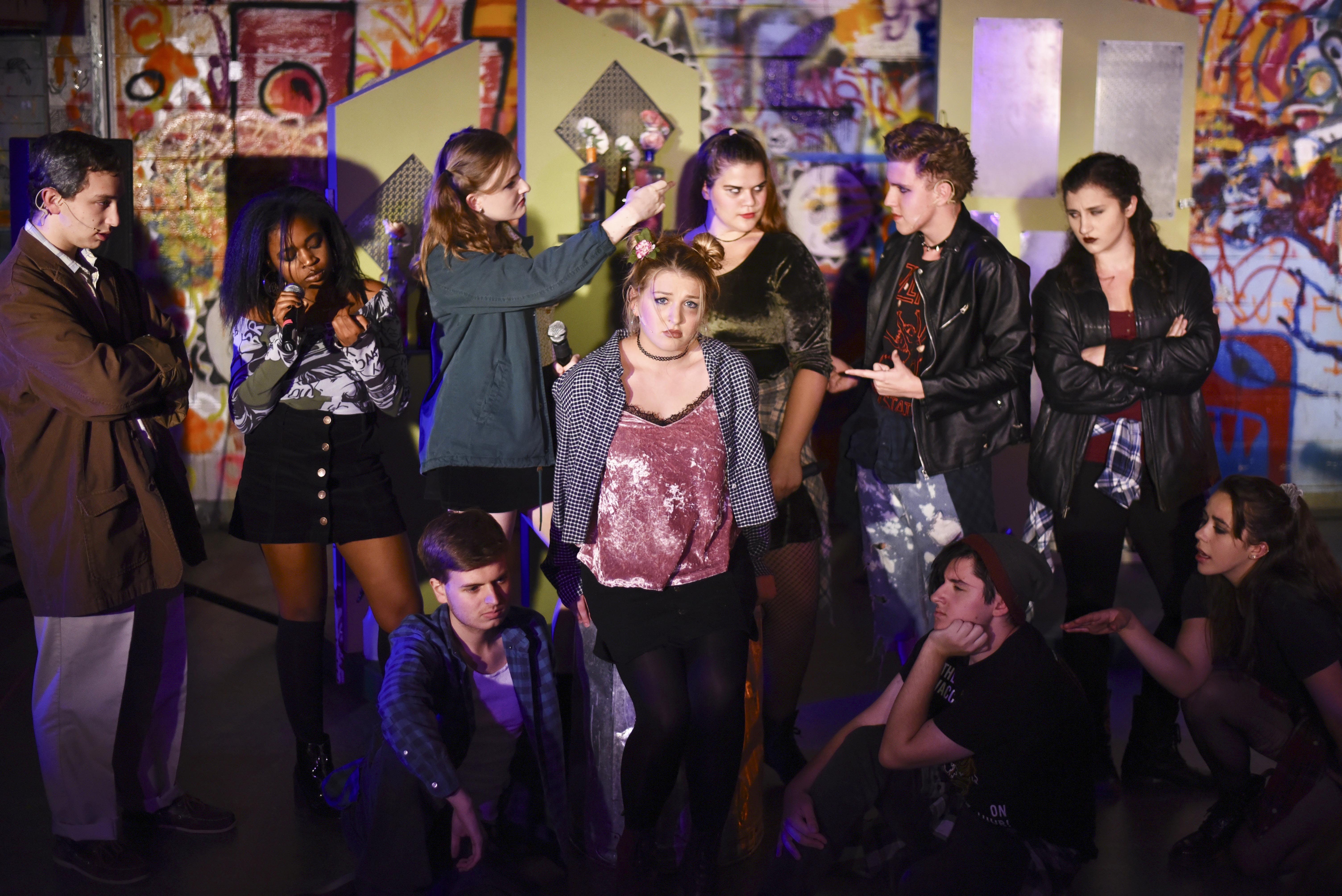 For instance, we are provided a humorous yet pointed critique of the American Dream. Audrey’s song, “Somewhere That’s Green,” paints a life of little box houses with amenities such as “a toaster,” “disposal in the sink,” and “plastic on the furniture to keep it neat and clean.” These images are paired with antiquated and anti-feminist lines like “he’s father, he knows best,” proving that even in her fantasies, Audrey does not have her own agency. Furthermore, even when the strange plant Audrey II gains fame, Audrey’s dream of a lovely American home is not realized. Similarly, Seymour’s rise from being an orphan on Skid Row to a botanical superstar seems to epitomize this national ideal of social mobility, yet his rise wholly depends on his continuing to feed blood to Audrey II. In gaining fame and success, he begins to lose his soul, his humanity. The play suggests that the idyllic image of the American Dream is a lie, a false future we hope to see but will never realize.

In addition to the question of hierarchy and mobility, the show covers the difficult issue of domestic abuse. Dr. Orin Scrivello, played by Payton Millet ’21, physically and verbally batters Audrey, who then believes that she “doesn’t deserve a nice guy,” a phrase all too common in the sphere of domestic abuse. Self-blame and loathing, as well as a sense of helplessness and loneliness, keeps Audrey chained to him. While there is definitely humor and sex in Scrivello’s flashy character, “Little Shop” delves into real issues that plague so many victims. The sense of blame, fear, and anxiety is evident in Pedell’s brilliant acting.

In an interview, Millet addressed the difficulty of playing such an evil role.

“It’s an interesting place to put myself into,” he said. “I try not to cross too many lines in terms of representing something problematic. I want to make it still approachable to an audience.”

The two actors work well together in representing something very deep and dark, while incorporating it seamlessly into the rest of the somewhat humorous and energetic play.

What’s curious about “Little Shop,” as Millet observes, is that its ’90s setting is strangely appropriate for the Wesleyan campus.

“People at Wesleyan seem to be confused about what decade it is,” Millet said, half-joking. “A lot of people think it’s still the nineties by the way they dress and just navigate the world. This show agrees with that sentiment. In the context of the show, it is still the nineties. So if you too are confused, as are much of the demographics of Wesleyan University that it is, in fact, still the nineties, come see the show and you’ll fit right in.”

Drew Weiss ’21, who plays Mr. Mushnik, expressed some more slightly straightforward praise for the show this group has pulled together.

“We put on something that’s kind of different and kind of weird, but nonetheless it’s very entertaining,” he said. “It’s a good time and a downright entertaining show.”