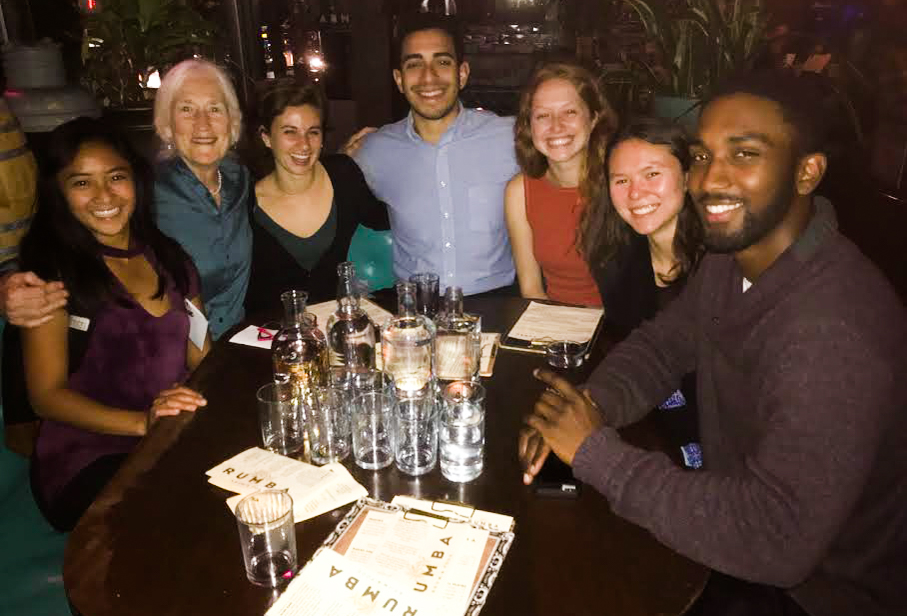 The annual meeting of the Geological Society of America (GSA) took place from Oct. 22-25 in Seattle, Washington. Students, professors, researchers, and geology enthusiasts came from all over the country, with khakis and scruffy beards in tow, and took over downtown Seattle for four days. Among the 5,000 or so geologists who attended were a dozen of Wesleyan’s own students and professors who came to present research, make connections, and enjoy the city.

GSA brings together the country’s geologists to share and exhibit research, drawing people from a myriad of fields under the geological umbrella: petrology, paleontology, geoscience education, and so much more. The many various societies within the world of geology hold banquets and events during the meeting, and universities sponsor alumni events or meet-and-greets. College seniors go to GSA to meet and find potential advisors and graduate school programs, while graduate students go to find jobs at universities. Veterans catch up with friends, or give and receive awards for decades of dedication to the field. GSA is a cocktail of the young and the old, Cretaceous geomorphology and polarizing microscopes, beer and rock hammers, and engaging in (sometimes heated) conversation.

Many of the events and presentations this year were held in the large and glassy Washington State Convention Center, and each day of the convention came with a new batch of posters and presentations covering a broad range of geological topics. Grouped into sessions such as “Recent Advances in Hydrogeology,” “Basalt Weathering on Earth and Mars,” and “Mass Extinctions II: Present, Past, and Future,” the research presentations were 15 minutes each and took place in various rooms throughout the center over the course of the day. Geologists milled from room to room, listening to and asking questions about aspects of the lectures that they interesting or controversial.

Wesleyan faculty and student were among those who presented research. Undergraduate students in attendance included Eduardo Centeno ’19, Noah Spriggs ’18, Eliza Carter ’18 and Sophia Ptacek ’18. Masters students Melissa McKee and Melissa Luna were also in attendance. Faculty members included Harold T. Stearns Professor of Earth Science Johan C. Varekamp, Professor of Earth and Environmental Science Suzanne O’Connell, George I. Seney Professor of Geology Martha Gilmore, and Associate Professor of Earth and Environmental Sciences Phillip Resor. Many of the students at GSA do research with O’Connell; they make up what she dubs her “Antarctica team,” with much of their research centering around geological data from the Weddell Sea in Antartica.

Like quite a few other masters students in attendance, Luna presented a poster on some of the work she’s been doing for her master’s thesis. This research focuses on analyzing grain sizes of fine fraction sediment in the Jane Basin, Antarctica.

“Basically, grain size is used as a proxy for the speed of the bottom currents of the ocean and information on this can tell you something about how the Earth responded to past climate change,” she explained in an email to The Argus.

Centeno, who also attended the conference, has also been working with data from Antarctica. His research focuses on 3 million-year-old diatoms, which are photosynthesizing microalgae.

“Diatoms are sensitive to environmental conditions at the species level (i.e. different species prefer different conditions),” Centeno explained in an email to The Argus. “I’m identifying diatoms in the Antarctic from 3.2 million years ago to learn how the ice off of the coast of the Antarctic Peninsula disintegrated during global warming events.”

“I didn’t actually present at GSA this year (thank god),” he added. “Suzanne gave the presentation for our research team and did an amazing job. She made sure to mention all of the students who worked on the project by name and describe what they were specifically working on. We’ve all been working with our specific ocean core for a long time (in my case for a couple years now) so it was really nice to feel like I’ve contributed to something and also receive credit at one of the biggest geology conferences of the year.”

Carter, also a member of the Antarctica Team, presented a poster of some of her work on an age model for core sediments, which interprets the chemical makeup of sediments over the course of various time periods. Carter works with foraminifera, which are tiny shelled organisms that generally dwell in seafloor sediment and have been around for half a billion years.

“The research I presented on was from my work this summer at Lamont-Doherty Earth Observatory, which will be used for my senior thesis,” Carter wrote in an email to The Argus. “I have been working on creating an age model for an Antarctic sediment core from the Weddell Sea. We believe that the core ranges in age from 250 to 950 thousand years ago. I have been creating the age model using the stable oxygen isotope signature of planktonic foraminifera from the core.”

These various projects demonstrate the wide range of geologic research even within the same region of study, hinting at the GSA’s great diversity of science. Luna, Carter, and Centeno all noted that they took advantage of the many talks and presentations that occurred over the course of the conference.

“I went to a lot of other GSA talks, short course, and networking events during the conference and gained a lot from them,” Centeno noted. “I never realized how professional the field was and how many opportunities there actually are for students out there.”

Of course, the motivations for going to GSA often differ based on a geologist’s experience, and budding geologists tend to notice that their reasons for attendance change as their career changes. This was certainly the case for Luna.

“At this particular GSA, I felt that I sort of stepped up in my career as a scientist,” she noted. “I’ve been attending GSA since 2012 and my purpose for this conference has changed over the years. The first time I attended, I just wanted to get a quick glimpse of what professional conferences were like. Over the years, I began presenting my own research, attending more specific talks to enhance my personal research background, and even scope out some graduate schools. At this particular conference, I had a more specific goal for myself and that was to actually meet with a collaborator for my own research.”

But GSA isn’t just talks and research presentations, or even about finding people to work with, though those are all major aspects. In other ways, GSA is centered around socialization and fun. My mom, who is a paleontologist, has been attending GSA longer than I’ve been alive. As I grew up, every time she returned from her annual journey she came equipped with bags of fun toys and knick-knacks that she’d picked up at a huge fair of booths from dozens of geological organizations and universities. My personal favorite toys were these plastic dinosaur eggs that cracked open to reveal a dinosaur and identification sheet.

I went to the fair this year and waited in the crowd of geologists of various ages bouncing on their hiking boots in anticipation of the doors’ opening. When we were allowed to enter, I went searching for those dino eggs for nostalgia’s sake, but alas, I couldn’t find any. I did, however, pick up one bag of rock candy, two field notebooks, two NASA pins, one tape measure and two fidget spinners. A successful haul, if I do say so myself.

Though the fun geology-themed toys are a highlight, the main event is, of course, the collection of research presented by the top geologists in the country. An additional wonderful perk is getting a chance to explore Seattle as a city.

“Seattle was amazing, I have literally no complaints about the city,” Centeno said. “Our lab group really wanted to explore the city so we rented out bikes almost every day and explored different parts of the city.”

“I think we lucked out because there was only one day where Seattle lived up to its rainy reputation,” noted Luna. “I also spent a lot of my time aimlessly riding the city bikes around different neighborhoods. Finally, my advisor (Suzanne O’Connell) and I had almost a once in a lifetime opportunity to attend a field trip with one of the most distinguished individuals in Antarctic research. So, between the conference and the city of Seattle itself, I can say that I had a pretty good time.”

All of this information, from both myself and University students, may give some indication of how overwhelming GSA was this year. Luckily, we come from an institution willing to help with navigation. Spriggs, who works on Antarctica data concerning biogenic silica produced by organisms like diatoms, explained that University faculty helped him steer through the conference.

“Initially I was overwhelmed by the conference as it seemed to offer too much,” he wrote in an email to the Argus. “However, Suzanne and other mentors helped me to bite off pieces rather than eating the entire cake at once.”

Centeno also commented that GSA made him appreciate the value of the University’s education.

“I also really learned to appreciate Wesleyan’s commitment to funding undergraduate research,” he explained. “We are really privileged to be able to work on such interesting projects which such qualified professors.”

Emmy Hughes can be reached at ebhughes@wesleyan.edu and on Twitter as @emmyughes.