Radiator Hospital Mellows Out on “Play the Songs You Like” 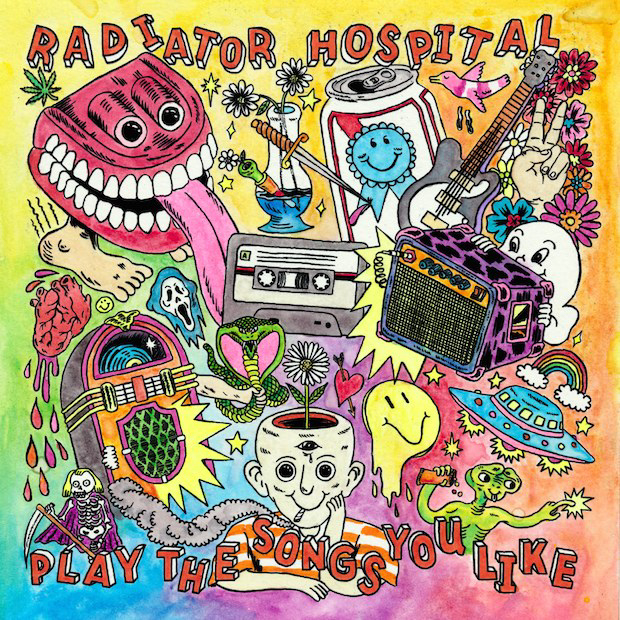 When Radiator Hospital played a small concert at MAC650 in Middletown, CT, on Monday, Oct. 23, their setlist consisted of a blend of new releases and older music. The audience had a clear preference for the latter.

The group’s bandcamp description reads, “Kick out the jams motherfuckers.” This description is a perfect distillation of the qualities that define Radiator Hospital’s music: irreverent, ironic, and sincere all at once (paradox intended). Radiator Hospital released their newest album, Play the Songs You Like, via Salinas Records at the end of October. Like previous records, Play the Songs You Like is loaded with shamelessly fun and cathartic songs, yet as a whole it feels disappointingly restrained.

The Philadelphia-based collective consists of Sam Cook-Parrot, Cynthia Schemmer, Jon Rybicki, and Jeff Bolt, and the band has released numerous LPs, EPs, and splits since 2010. They’ve established themselves as a fixture of the Philly indie pop scene, and they gained national prominence with Something Wild (2013) and Torch Song (2014). The band is also known for their collaborations with other artists, such as split EPs with Martha, Sorority Noise, Krill, LVL UP, and Ovlov.

Radiator Hospital has never been afraid to embrace the pop dimension of their music, churning out singles that are imminently catchy. Simple songwriting, loud guitar, and fuzzy reverb are staples of their style. Cook-Parrot’s captivating vocals are whispered, shouted, screamed, moaned, wailed, and croaked. All of these qualities firmly place Radiator Hospital in the “emo revival” movement, but their music has always had a sense of urgency and intimacy that sets them apart from other bands in their bedroom punk milieu.

With Play the Songs You Like, Radiator Hospital has moved away from their early DIY aesthetic toward something more measured and tame. The album’s first single, “Dance Number,” is a safely linear rock song in which feelings are named more than expressed. The second single, “Pastoral Radio Hit,” is much more dynamic, and it simmers with nostalgia and longing. If the third single, “Nothing Nice,” starts out as an amble, it escalates to a jog, but it never reaches a sprint. This exemplifies why the album feels restrained: many songs build energy within them, but the energy is ultimately quieted, subdued, or abandoned. Interestingly, Radiator Hospital repeatedly turns away from the opportunity to kick out the jams. It’s more like they’re gently passing over the jams, and—to mix metaphors—the jams are decidedly bittersweet.

The restrained quality of Play the Songs You Like is not necessarily a bad thing. At best, it add layers of tension to the album. Many songs still shine with the frenetic power pop vibes that Radiator Hospital fans have loved for years. “Lonely Road” is a carefree banger that largely consists of semi-serious, semi-playful rhetorical questions (possibly the best of which is, “When will you decide to memorize my number?”). “Lonely Road” is followed by “The People At The Show,” a much darker song in which Cook-Parrot angrily lashes out at somebody (a bandmate?), challenging their commitment to each other while performing a show together. Cook-Parrot sounds exasperated as he sings, “We get fucked up in the same places / but when the wave comes crashing down / will you swim to me / or watch me drown?”

Two stand-out songs on the album are “Half Empty” and “Sycamore (By Martha).” “Half Empty” was originally released on a 2014 split EP. Like “The People At The Show,” it is explicitly about relationship doubts. Despite this theme, the song exudes warmth and affection. Schemmer’s vocals shake with vulnerability, lending the song a hushed but heartfelt compassion. It’s a stunningly, unexpectedly effective love song that captures the fears and hopes of falling for somebody. Meanwhile, “Sycamore (By Martha)” is the only song on the album that wasn’t written by Radiator Hospital, penned instead by longtime Radiator Hospital friends and collaborators Martha. Unlike many of the other songs on the album, it starts out with a level of energy that it never matches again. “Sycamore (By Martha)” seems to deconstruct itself, eventually collapsing or fading away. It’s a complicated song that feels essential, perhaps as an exercise in giving up some of the creative freedom that Radiator Hospital cherishes. Vocals are pushed aside and then subjugated to a secondary position behind guitar. The album ends with “Absolutely Positive (For Martha),” a charmingly self-aware tune about partnership, self-control, and admitting when you’re wrong.

Play the Songs You Like marks the biggest artistic leap in Radiator Hospital’s career, but too many of its 16 songs come off as emotionally flat. The album suffers from a lack of ambition, and not in a quirky, underdog way.

“What a nice little show this is,” Cook-Parrot said at the beginning of Radiator Hospital’s set last month. Much like Play the Songs That You Like, he sounded both underwhelmed and underwhelming, slightly too tired to kick out the jams.