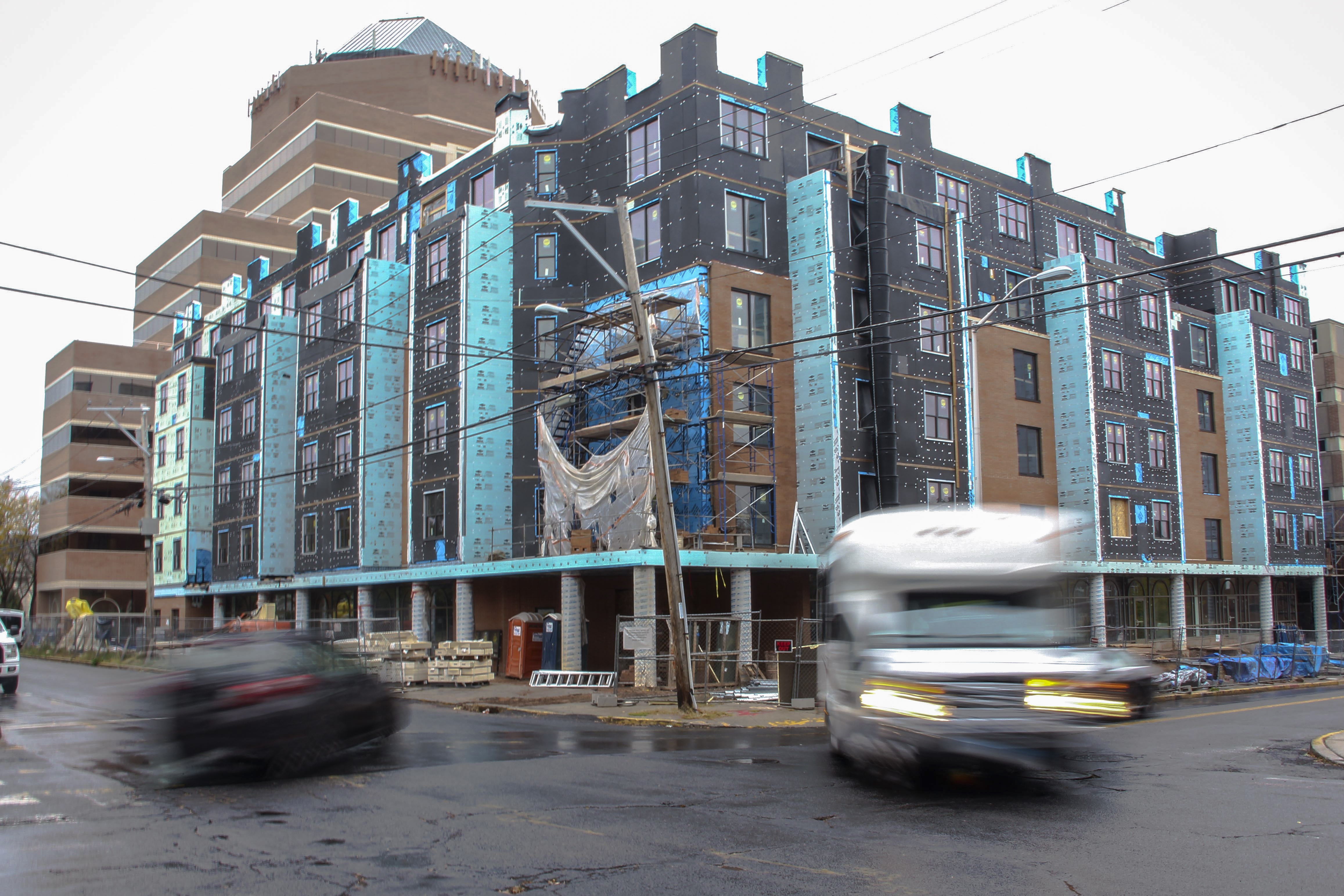 City officials have heralded the ongoing construction of the 93-unit apartment building on Broad Street as the turning point in revitalizing Middletown’s downtown area.

Hajjar Management Co. and Mayor Dan Drew jointly announced plans for the project in 2014, which began with a ground-breaking ceremony in September 2015. This project will mark the Massachusetts-based construction company’s second major addition to the city’s emerging skyline, the first being the massive MiddleOak Office tower.

Featuring mostly one-bedroom units, the new six-story building is anticipated to bring in a wave of young professionals to Middletown. From its central location, these residents will be able to walk to many of the upscale restaurants and stores on Main Street, which now includes the University-affiliated R.J. Julia bookstore and its in-store cafe, grown.

“Walkability” is important here, as anyone who has ever driven a car downtown is probably aware of the constant parking problem. Additionally, being able to stroll down to Main Street bars such as Conspiracy or Keagan’s helps to alleviate drinking and driving concerns.

The commercial success of this project, of course, depends on Hajjar Co.’s ability to attract wealthy residents to live in downtown Middletown. Many officials and residents are looking to this project as a guinea pig, which, if successful, they anticipate will attract many more construction projects in the city’s developing upscale residential market. This project has run into several issues, however. Specifically, it seems to be stalling.

According to the Hartford Courant, Hajjar Management Co. had initially planned for a fast-track construction that would use pre-built modules for furniture. These modules were brought into the apartments mid-build, before its walls and doors were put up. The goal was to avoid wasting time assembling dressers and beds piece by piece.

This plan worked well until late this summer when the big storms come, causing substantial weather damage that has made it necessary to redo several parts of the walls and floors. This means that all those ready-to-go beds and dressers had to be taken out and will need to go back in. The project is now 18 months behind schedule.

A minor issue has been controversy over the substantial tax cuts Middletown offered to Hajjar in exchange for bringing its business to the city. Under the current tax deal, the city will cede $2 million to Hajjar Management Co. by freezing the property’s assessed value.

When questioned about the tax cuts, Mayor Drew insisted that they were standard operating procedure.

“It’s a standard tax incentive that municipalities have available for economic development purposes,” Drew said, as reported by the Middletown Press.

And indeed, this does seem to be a common policy for Middletown, at least since 2012. That year, the city offered similar commercial tax abatement deals on at least ten properties, as listed in a report highlighting areas the city wanted to develop.

Such tax breaks indicate that Middletown’s long-term economic plan anticipates this apartment building’s success. While the construction project will bring restaurant revenue downtown in the short term, the real stability that the city hopes to gain from projects such as this are increased taxed revenue in the future. After Hajjar’s two year abatement, Middletown plans to collect an impressive $350,000 per year from the apartments, as well as revenue from taxes on the residents’ cars. Drew said that this new construction project will increase the city’s grand list by $12 million.

Another minor criticism faced by Drew in this project has been accusations that he pressured the Design Review and Preservation Board. Allegedly, he wanted to grant permission for the project before the board could complete a full review of the project design.

“It circumvents the process and purpose of having subcommittees,” the Commission’s Vice Chair Molly Salafia wrote in an email after the meeting, as reported by the Middletown Press. “Subcommittees are extremely important tools for us commissioners to make our decisions.”

Of course, the committee did eventually approve the project, putting the issue to rest.

Despite the construction delays and policy concerns, many are still excited for one of Middletown’s largest construction efforts in the new millennium. The city has been waiting for such an opportunity ever since Aetna, in the wake of the recession, demolished its nearby $170 million corporate campus, which had accommodated nearly 5,000 employees.

“It’s a huge boon for downtown and it’s long been a goal we’ve been pursuing,” Drew said to the Courant.

The University shares the city’s excitement. Vice President for Finance and Administration Nathan Peters, who frequently acts as the University’s liaison to Middletown, sees benefits in the project for not only local residents, but for students, teachers, and administrators as well.

“We look forward to the completion of the downtown apartment building,” Peters said. “This will add to the liveliness of Main Street. It also provides an option for Wesleyan faculty and staff to live. An appealing downtown is something newcomers to Middletown are looking for and will help with the area’s economic development.”