We Bake, We Jam: Jeffrey Hill is Wesleyan’s Jelly Man 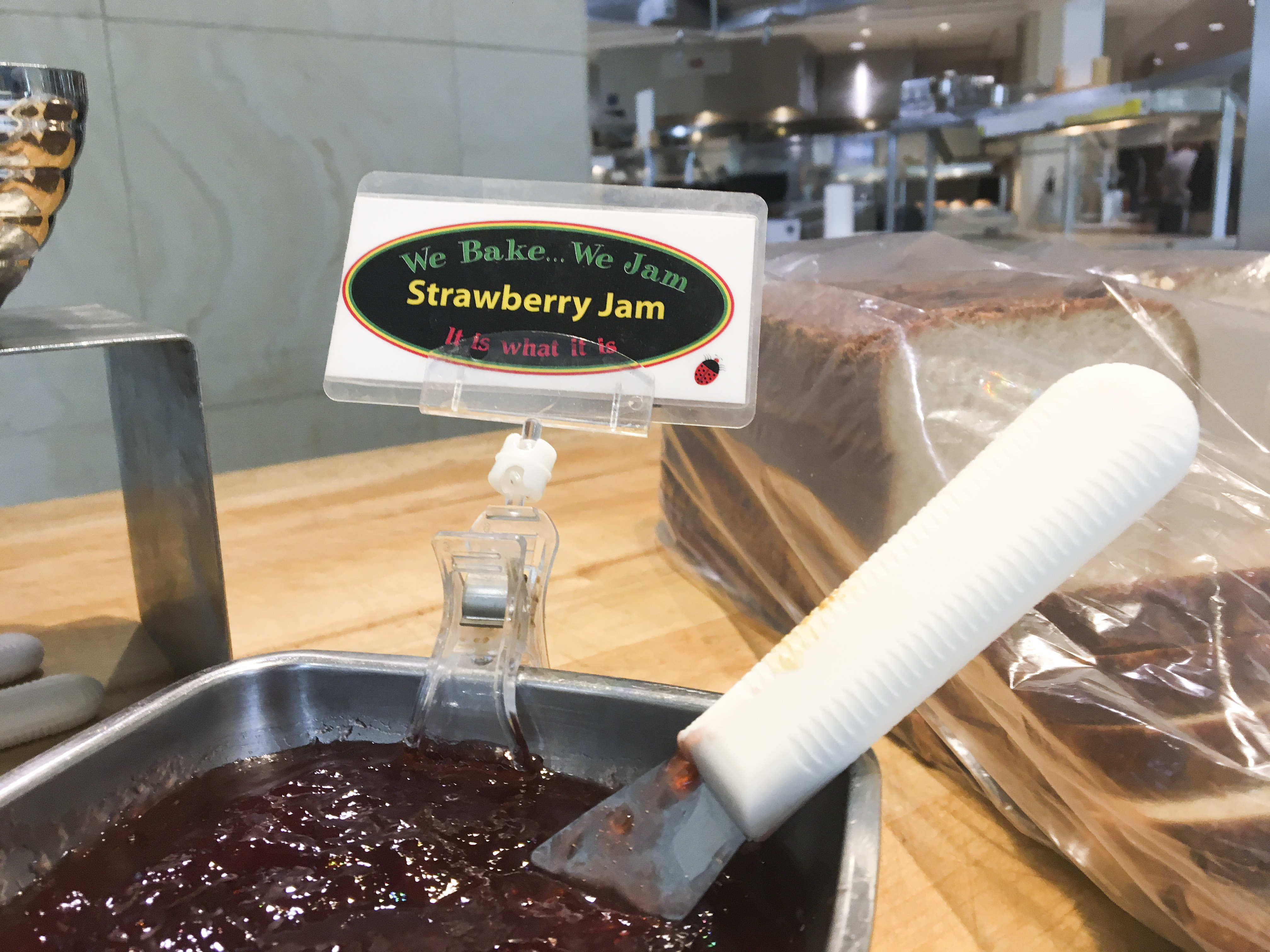 When you spread some jelly on your peanut butter sandwich in Usdan, do you ever wonder about where that sweet stuff comes from? What about when you pick up a jar of jam from Weshop? Well, wonder no further!

Jeffrey Hill is the mastermind behind We Bake, We Jam, the jelly and jam provider for the University. Sold in Weshop, and served in Usdan and other Bon Appétit dining halls on campus, We Bake, We Jam is making a name for itself here at Wesleyan.

Jeffrey has worked at Wesleyan for 38 years as a chef, where he also met his wife. It was his wife who helped him come up with the catchphrase, We Bake, We Jam. Hill explained that his wife was a baker, while he was making jam at the time.

“I thought that would be kind of cool, We Bake, We Jam, a kind of play on words,” said Hill, “You could put another meaning to that, if you wanted to.”

On Hill’s labels for his jars of jam, you might see a small ladybug on the bottom right. That insignia exists to honor Hill’s stepdaughter Lindsey, who loved ladybugs. She unfortunately passed away at 25 due to complications from dystonia.

Hill went on to explain how We Bake, We Jam, got started.

“It started with gardening,” Hill said. “I love to garden…. In high school, I started making my own tomato sauce from my own tomatoes, so I liked all that. It was just in me, a natural thing to like to do. I liked making my own food, my own stuff. Even in my twenties, I had my own place, lived alone, I would make pickles and I would make sauce and I would give it away…. Then I got married in my thirties, I moved from Portland, right over the bridge here to Middletown, lived here for nine years, and moved to Durham. In Durham…there’s a fair in September, and part of the fair had an area where you have canning and you win prizes. When I moved to Durham, I started entering a lot of stuff in the fair. I started winning first prizes in a lot of things, first prizes, blue ribbons for jams and jellies, pickles, applesauce, vinegars. People would say to me, ‘you should sell that stuff.’ Somewhere along the line, maybe seven years ago now, I started thinking about it. I said maybe I should try to put a little business together.”

His business has flourished since then. After Hill started We Bake, We Jam, the Bon Appétit dining services approached him and asked him if he wanted to sign up for the Farm to Fork program, which purchases foods from local farmers. Hill was approved for the program, and now he makes all of the jelly and jam on campus. Hill says that he is thrilled that Bon Appétit wanted to buy his products and that they are what really keeps him in business.

One of Hill’s main priorities, when he makes his jams, is to make sure that everything is all natural with no other additives.

“No preservatives go into the jelly. That’s why on the label it says, ‘it is what it is,’” Hill explained. “I’m not adding sodium benzoate, any kind of preservatives. It’s all cane sugar, and I know people make a big deal about high fructose corn syrup, but it is metabolized different from your body. All my fruits and vegetables are all local: if they’re not my own, they’re from local farmers…. [I] just can all the fruits in jars, and then when it comes time to make the jam is when I mix it with sugar and pectin, and that’s it. I put it in jars and it’s done. Anytime I’m selling it, it’s just made. I don’t have a big stock at home where I just draw it off the shelf. If they want strawberry jam on Friday, I make it on Thursday. Everything is very fresh.”

So, just how does Hill make this magical jelly? The process is no joke. It takes a lot of work to deliver jelly to the University.

“A lot of nights I’m up at 2 o’clock in the morning doing this,” Hill said. “To make eight shelf jars that sell at Weshop, the actual process to make the jelly may take a half an hour from start to finish, but that’s not including the time it took me to peel all the peaches and put them into jars another time, it’s different stages. In August, I might can the peaches and then take the peaches and turn it into jelly. A half an hour to make eight little jars, maybe. They all have to be labeled. So far, we hand-write the ingredients labels. Down the road I may have those printed. It’s a lot of work…but so far it’s working.”

In the future, Hill says that he would like to expand his product line.

“There’s many things I haven’t made that I could make: chutneys, additional kinds of flavors of jam. There’s always new flavors to come up with,” Hill said. “Here’s a recipe. I haven’t made them because they’re time consuming, but everyone keeps asking me to make the bread and butter pickles. My grandmother’s recipe. Those used to win first prize at the fair every year. Gary at Weshop keeps asking, ‘when are you going to make the bread and butter pickles?’ If I had more time, I’d do more things…. Someday I’d love to go on the circuits of farmers markets. I like talking to people, selling my stuff, talking about my stuff.”

The next time you slap some jelly on your toast in the dining hall, remember to thank Hill for all of the hard work he puts into making We Bake, We Jam such a big success.

“I told myself when I started doing this, no matter how big or how small it gets, to stay with the plan,” Hill said. “Don’t deviate from the recipes, don’t try and make it cheaper so you can make more money. It’s not like this is a big money maker. It’s more my own thing, it’s mine. I like it the best.”