In Slow Dakota’s Rumspringa, Sauerteig Archives His Own Migration 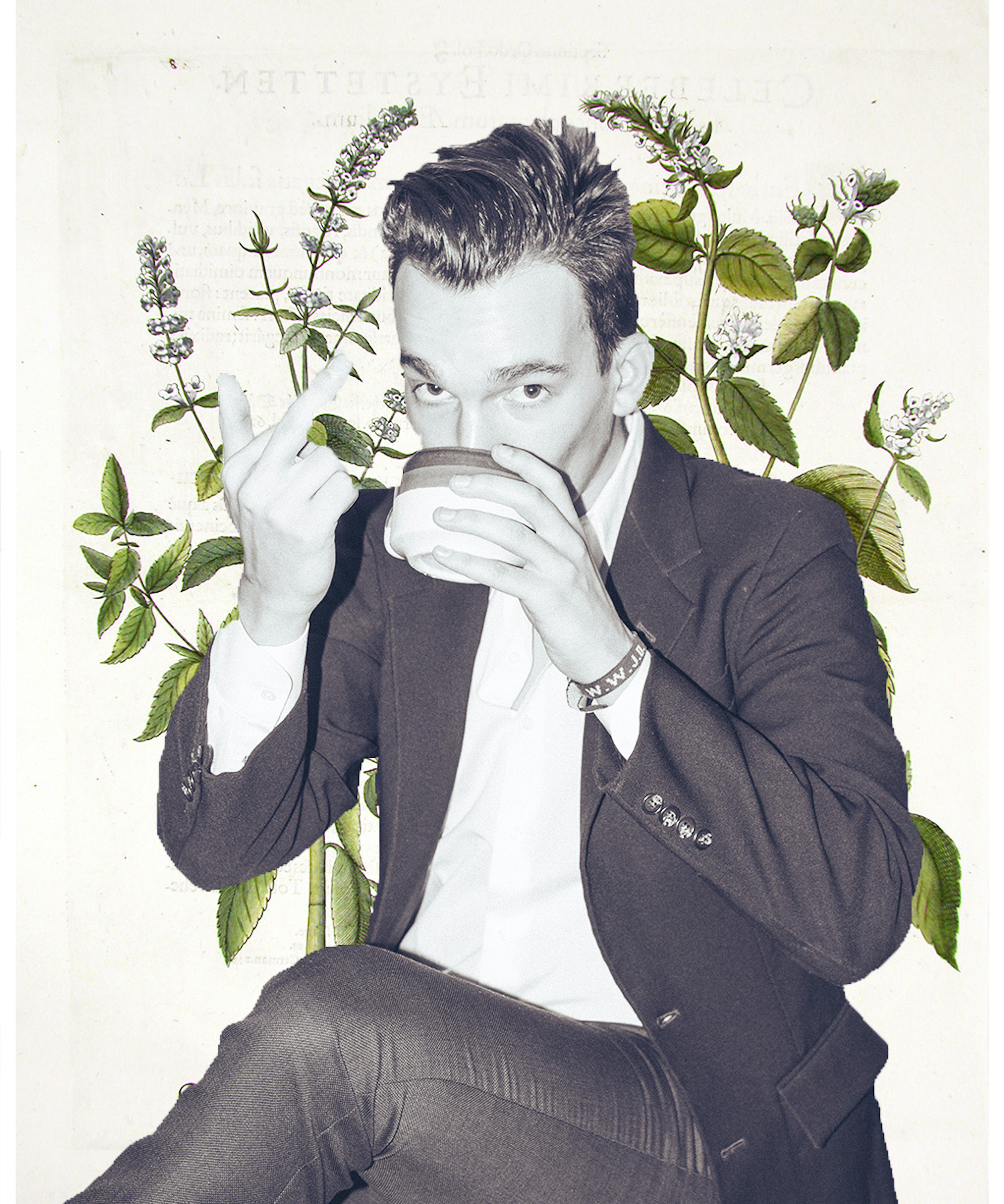 The word “Rumspringa,” which translates to “jumping or hopping around,” refers to an adolescent rite of passage. The custom is practiced in some Amish and Mennonite communities and begins in the mid-teen years. For Amish adolescents who partake in Rumspringa, the process lasts a total of two years, occurring between the ages of 14 and 16. During this time, teens are given the opportunity to “live among the English”— or non-Amish—listen to rock music, drink alcohol, and experience life as it is for the average American teenager. However, nearly all Amish youth continue to live with their parents during these years, and many choose not to engage in activities that are contrary to traditional values of the church. Rumspringa ends when an individual either leaves the church or chooses baptism—committing him or herself to become a responsible adult in the church.

It is from here that the baroque pop, genre-blending Slow Dakota drew his inspiration for his latest EP, Rumspringa. Born in the cornfields of Indiana, PJ Sauerteig began recording under the moniker Slow Dakota from his dorm room at Columbia University. Since then, he’s released four collections of music, which include a full-length album titled The Ascension of Slow Dakota, which was released last July.

If there’s one thread that runs through nearly all of Slow Dakota’s music, it’s that each track necessitates contemplation to grasp any literary, biblical, and cultural allusions present within the lyrics. Rumspringa, though not as laden with these as The Ascension was, is no different, and solicits from the listener the same attention to detail that is fed in to make each track not only a standalone work, but a part of a larger, more complex, and expansive narrative.

The story that Rumspringa tells is one about the delights and pitfalls of life in the Midwest, chronicled in vignettes that contrast life at home with that in a large, impersonal city. In the opening track, “Abram Indiana,” many lines begin with the refrain “when I’m free.” When Sauerteig is free, he is surrounded by nature, away from the city. He’s swatting horseflies, standing in a scenic field on a hill, and watching his grandma make raisin bread. These are the storybook images we associate with the Midwest, and though bicoastal urbanites might not immediately conflate freedom with the flyover states and militant politeness, listening to “Abram Indiana” is also like zooming down a highway with the wind in your face and the glow of the sun on your cheekbones. It is a feeling of escape that is somehow so intrinsic to the American zeitgeist—so hackneyed, and yet new and welcome each time it is experienced.

Darker moments in Rumspringa emerge as well, especially in “Cherry Mary Michigan,” when Sauerteig juxtaposes the anonymous, panoptic, and frenzied city with scenes of decline from the rural Midwest. Sauerteig croons, “Helicopters watch me through my window / Helicopters watch me close my blinds / I don’t know any of my neighbors’ names.” These lines describe an element of urban life that is characterized by the solitude felt despite being surrounded by people. As the song continues, Sauerteig asks himself, “Why on earth do I live in this prison?”

Towards the end of “Cherry Mary Michigan,” Sauerteig also incorporates an audio excerpt from a farmer speaking about the dire state of crops in Michigan.

“I had a young farmer tell me, a couple of months ago, ‘The old timers tell me that 2002 was a once in a lifetime thing, and now we have this, a likening,’” the farmer said. “And I said, ‘Easy! They didn’t lie to ya, they just don’t know!’”

If one consults the internet for further clarification, as is often needed with Slow Dakota’s lyrical references, 2002 was the year when freezing spring temperatures eradicated nearly the entire tart cherry crop in Michigan. This happened again in 2012, and since then, erratic temperatures have made for an onslaught of difficulties for cherry growers, who can neither predict the success of each year’s crop or do anything to change the outcomes upon harvest time.

In spite of the air of stagnancy and hardship that can be characteristic of rural life, it is clear that in Rumspringa, Sauerteig feels an undeniable kinship for his home and seeks to return to what is friendly, familiar, and intimate. “Elijah Yoder” takes listeners through such musings, as Sauerteig sings about moving from a small town to a city: “Little did I know / I’d end up missing / My little farmhouse town: / A little lamplight / And midnight thunder sounds.” He concludes the song with the lyrics, “Maybe my family’s right / Maybe they stand on the porch and wait for me in the night.”

These lyrics are tremendously moving, but the impact feels almost diminished by the medley of bright synths and percussive elements that overtake the vocal track. This repression of sentimentality, however, is precisely the desensitized feeling that Sauerteig seeks to pinpoint—the speed and brazenly forward-moving momentum that one both possesses and experiences when living in a city.

“Jebediah Iowa” closes the album and features Sauerteig narrating details of his own life imbued with jocular magical realism. He recites, slow and withdrawn, over interwoven loops of piano, bass and drums: “I stood and told my father straight: The Law is not for me. / Instead I’d like to be a chef, / And live with foxberries.” The following scene involves Sauerteig’s father asking whether being a chef will actually make him happy, but, before he answers, chaos strikes and the stove sets the entire kitchen alight. Suddenly everything in the kitchen comes to life: There’s an unidentified object stewing inside a pot that causes him grief, he slips on rigatoni, and this wildly absurd yet weighty scene concerning the future lurches to a halt.

What distinguishes Rumspringa from past Slow Dakota albums is the largely autobiographical narrative elements. After growing up in Fort Wayne, Ind., Sauerteig completed his undergraduate work at Columbia, where he majored in English with a concentration in psychology. For some time, he hoped to become a chef and worked as a line cook at Jean-Georges’ Nougatine while completing his studies. Currently, Sauerteig is a second-year law student at NYU but hopes to return to Indiana one day.

In a 2015 interview with The Columbia Review, Sauerteig spoke about how the moniker Slow Dakota came to fruition.

“It’s a silly name,” Sauerteig said. “When I was a sophomore it was the first time I ever sank into real, clinical depression—not like, ‘I’m an angsty teenager,’ but medical shit. Dealing with stress and expectations, I would have this fantasy where I would think about dropping out and going to work as a store clerk in like North Dakota. I would just drop off the face of the earth and no one would expect anything from me. No one would know where I came from, and no one would impose any narrative onto me or tell me what I had to be or what I had to do. It was an escapist fantasy, and that’s where [the name] came from.”

It is no coincidence, then, that the Rumspringa, an escapist fantasy for some, drew Sauerteig’s attention in the first place, perhaps for the same reason New York did. New York, the protagonist of “Goodbye to All That”—the commoditized, idealized, disparaged bastion of the cutting edge and destruction of the nuclear family—makes for a welcome escape from frozen cherries and sprawling fields. But sometimes, even native New Yorkers can’t keep up with how fleeting each moment becomes or how transient the very notion of people become, as if entire lives boil down to the instant during which we interact with them, and then are gone forever.

In Rumspringa, Slow Dakota becomes more accessible and less decadent, and instead of playing the role of narrator, he transitions to that of the subject. We don’t know whether Sauerteig chooses to stay or go after his Rumspringa, and perhaps he does not yet know either. But grappling with the decision is an adventure within itself.

Rumspringa was produced by Sahil Ansari, mastered by Greg Calbi, and is out on Massif Records. Additional vocalists include Shanna Poley, Lila Livingston, and Jaq King. Gabriel Brown played the cello.