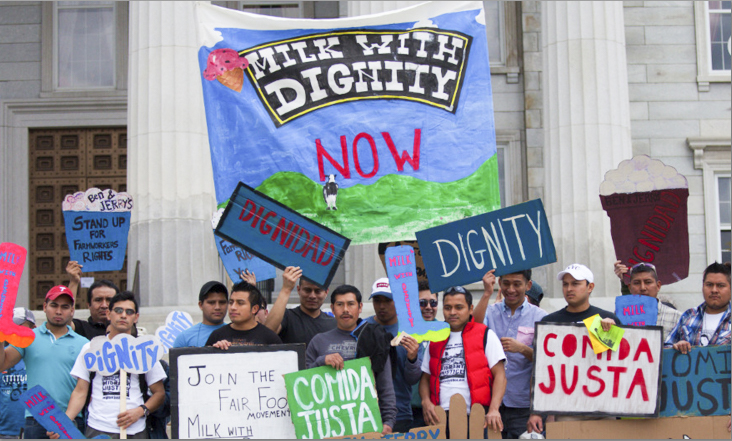 Last Tuesday The New York Times, along with other news organizations, reported that Ben & Jerry’s had reached a negotiation with Migrant Justice, a farmworkers’ activist group, to sign onto the Milk with Dignity Program. The program secures certain labor standards for the dairy workers at the company’s suppliers. While news outlets have for the most part lauded Ben & Jerry’s for signing the agreement, local protests that Wesleyan students helped mobilize, and which were set to take place the day after the company signed the agreement, offer a competing narrative.

As reported, Ben & Jerry’s, a Vermont-based ice cream company, has promised to only use milk supplied from dairy farms certified by the Milk with Dignity Program, which will have a board oversee and evaluate working conditions on local farms. Milk with Dignity guarantees that farmworkers, many of whom are immigrants and thus often exploited by employers, will earn at least the $10 state minimum wage along with standardized working conditions and benefits. Workers will have at least eight consecutive hours of breaks between shifts and housing that includes electricity, clean water, and bedding. As included within the NPR coverage of the deal, the Milk with Dignity Program also requires its farmers to provide their workers with paid sick days, time off, and safe working conditions.

Ben & Jerry’s currently gets its milk from 85 different Vermont farmers—most of which are included in the St. Albans Cooperative Creamery—whose operations will undergo a thorough inspection by the Milk with Dignity Standards Council, as many reports have been leaked informing the public about the malpractices on the farms.

These standards will be administered by informing workers of their rights and giving them accessibility to report violations through a 24-hour hotline. In addition, Ben & Jerry’s will be required to comply with the council, composed of lawyers from the Southern Poverty Law Center’s Immigrant Justice Project, who will monitor farming practices and conduct audits on the company, which Ben & Jerry’s will finance. All the conditions to which the company agreed will be adopted in stages, but some standards, like prohibitions on sexual assault, forced labor, and violence toward workers, will take effect immediately.

Despite the apparent soundness of this agreement, which media outlets have thoroughly lionized, it has been largely under-covered that Migrant Justice brokered an almost identical deal with Ben & Jerry’s back in 2015. This 2015 agreement is the central problem that the student protests wanted to bring attention to.

Back in 2014, Migrant Justice conducted a survey of about 170 dairy workers which showed that workers had schedules that frequently kept them from sleeping more than a few hours at a time, and that they were only allowed a few days off a year. The study also revealed that many of the migrants, who work year-round for low wages and live on the farms that employ them, had substandard housing.

In preparation for the protests, Tomás Rogel of Ajúa Campos sent an email out to inform members of the University community about the backstory behind the demonstration that Migrant Justice was hosting:

“In December 2014 farmworkers approached Ben & Jerry’s, inviting the company to take the lead in the industry by joining the Milk with Dignity Program—precisely because they are a corporation that has distinguished itself for its commitment to social justice and high standards for sourcing ingredients in its world-famous ice cream,” the email explained. “Ben & Jerry’s is also important to farmworkers because it purchases 100 percent of its cream from St. Albans Cooperative farms where many (if not the majority) of Vermont’s 1200-1500 dairy farm workers are employed.”

Rogel, the treasurer for Ajúa Campos, played an active role in mobilizing University support for the protest. Rogel worked for Migrant Justice over the summer but could not comment for this article due to a nondisclosure agreement that he signed while employed by the organization.

As continued in the email, “On June 19th, 2015 Ben & Jerry’s and Migrant Justice signed an Agreement to cooperate on the Milk with Dignity program, but as of today they have yet to join the program.”

Another grievance that the protest organizers shared was that Ben & Jerry’s had used the 2015 agreement to bolster their public image without actually taking necessary steps to implement the deal, hence why two years later the agreement is being reaffirmed.

However, these problems, which underscore the entire premise for this new agreement, have been entirely negated by news outlets that instead chose to dub the deal as a huge step forward for Ben & Jerry’s and their dairy workers.

Instead, The New York Times’ coverage of the deal featured interviews that make it seem as if the Ben & Jerry’s and the Milk with Dignity agreement garnered unanimous support. The coverage included an interview with the CEO of Ben & Jerry’s, Jostein Solheim, who commented on the agreement.

“We love to be part of innovation,” he said. “We believe in worker-led movements, and in bringing in dairy and doing it in Vermont.”

While The New York Times briefly mentioned the 2015 deal, the article is quick to note the complications of the deal.

“Negotiating the details of the agreement, which affects nearly 90 farms that typically employ up to 10 workers apiece, proved to be complicated,” reads the article.

Too preoccupied with defending Ben & Jerry’s, the news coverage marred the complexities of the agreement and minimized the issues that student protests were pushing forward.