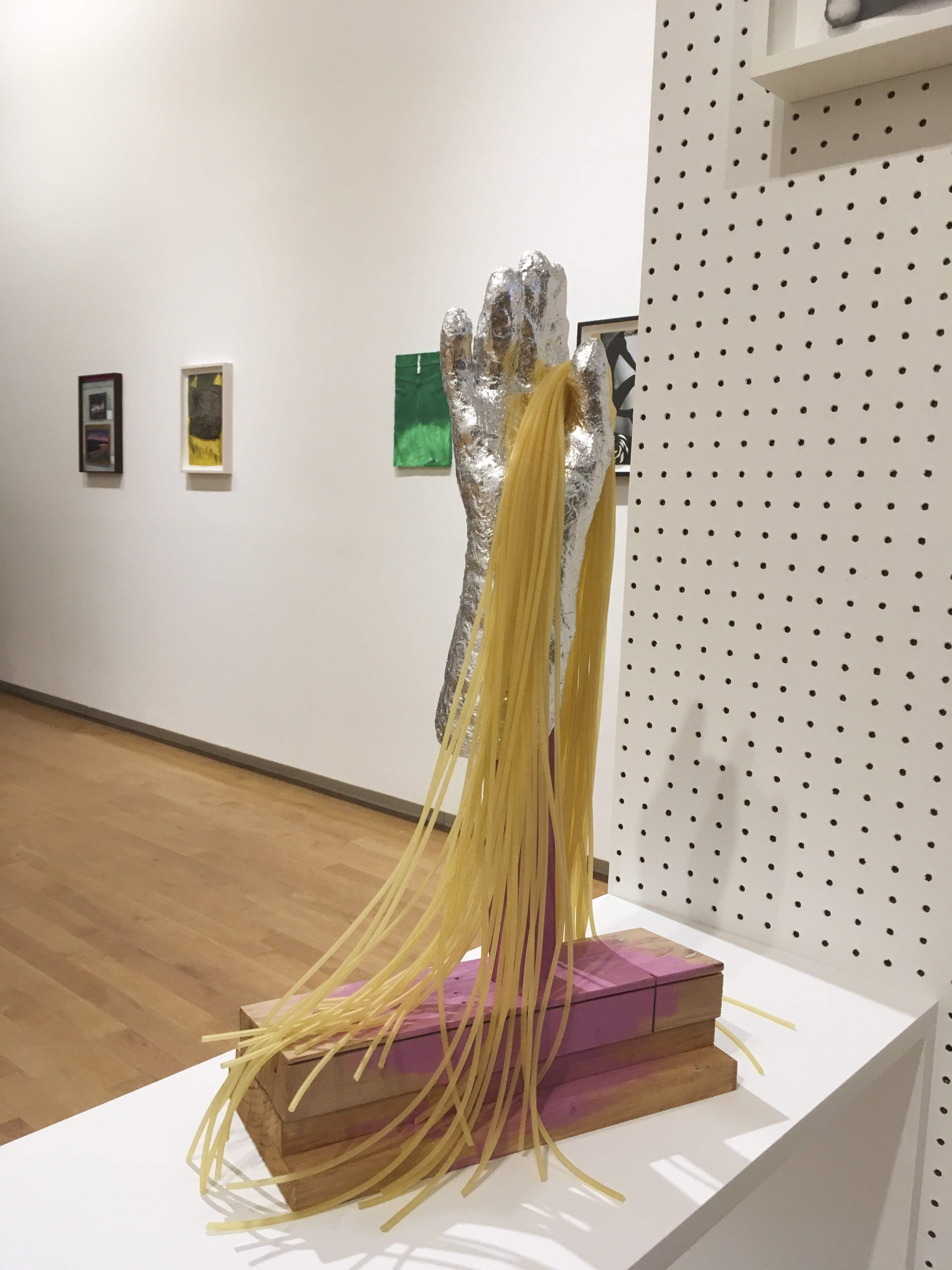 Neon-dyed blue jeans, meticulously arranged Cheerios, and an aluminum-coated hand holding strands of noodles dominate the space occupied by Anissa Mack ’92’s exhibit “Junk Kaleidoscope,” which opened last week at the Aldrich Museum of Contemporary Art. An eclectic mix of collage, painting, sculpture, and multimedia works, “Junk Kaleidoscope” is a playful but meditative show that pulls together threads of craftwork, curatorial customs, pop culture, and domestic life to engage museum visitors and investigate a phenomenon not commonly linked to art in the most traditional sense of the word.

“Junk Kaleidoscope” draws directly from two of Mack’s past exhibits, one from 1996 and another from 2006. The original iteration of the show was titled “The Fair,” and consisted of 73 entries that Mack had created for that year’s Durham Fair, a large-scale agricultural fair here in Connecticut that Mack frequented as a child growing up in the neighboring town of Guilford. Ten years later, Mack decided to revisit the project, creating new entries for all of the categories included in that year’s fair.

Approximately 10 years since that second anniversary edition, Mack has turned to a more arts-oriented interpretation of her interest in fairs: Instead of entering pieces in the fair’s categories, she has come up with a list of her own, pulling ideas from the Durham Fair but also from other county and state fairs throughout the country, not to mention her own imagined prompts. The entry categories range from “Ceramics, hand built” and “Lamp, any size or style” to “Whiskey, if you have it,” “1999,” and “More as I remembered it.”

“This time around, her objects are not craft objects but contemporary works of art,” points out Aldrich Museum curator Amy Smith-Stewart. “She’s using the fair system of categorization and competition as a way of engaging with contemporary art practice.”

Mack’s interest integrating the fair into her art—whether it’s in the more explicit format of her first two fair pieces or the more distant influence in this present one—dates back to when she first entered the art world after graduating from art school. She began to notice a connection between the way the gallery world in New York functioned and the way that fair entries are divvied up and judged.

“When I got my first taste of what it was like to have an exhibition, meet people who were running galleries, and go to galleries regularly, I saw this dealing and judging and categorizing going on, and I was able to make this correlation between galleries and fairs,” Mack recalls.

This particular exhibit first began two years ago, when Smith-Stewart approached Mack with the idea of continuing her 10-year tradition of producing fair entries. Mack, who felt her work was headed in a slightly different direction, worked with Smith-Stewart to develop the exhibit to its current form, which diverges most significantly from “The Fair” in that its pieces were created for the exhibit and the exhibit alone.

Mack and Smith-Stewart also collaborated to add a new component that allowed viewers to engage in the artistic and curatorial processes involved in putting together an exhibit: In January, a group of individuals selected through an application process on the museum’s website will work together to re-arrange Mack’s works according to their own perceptions and understanding of the art they’ve observed. 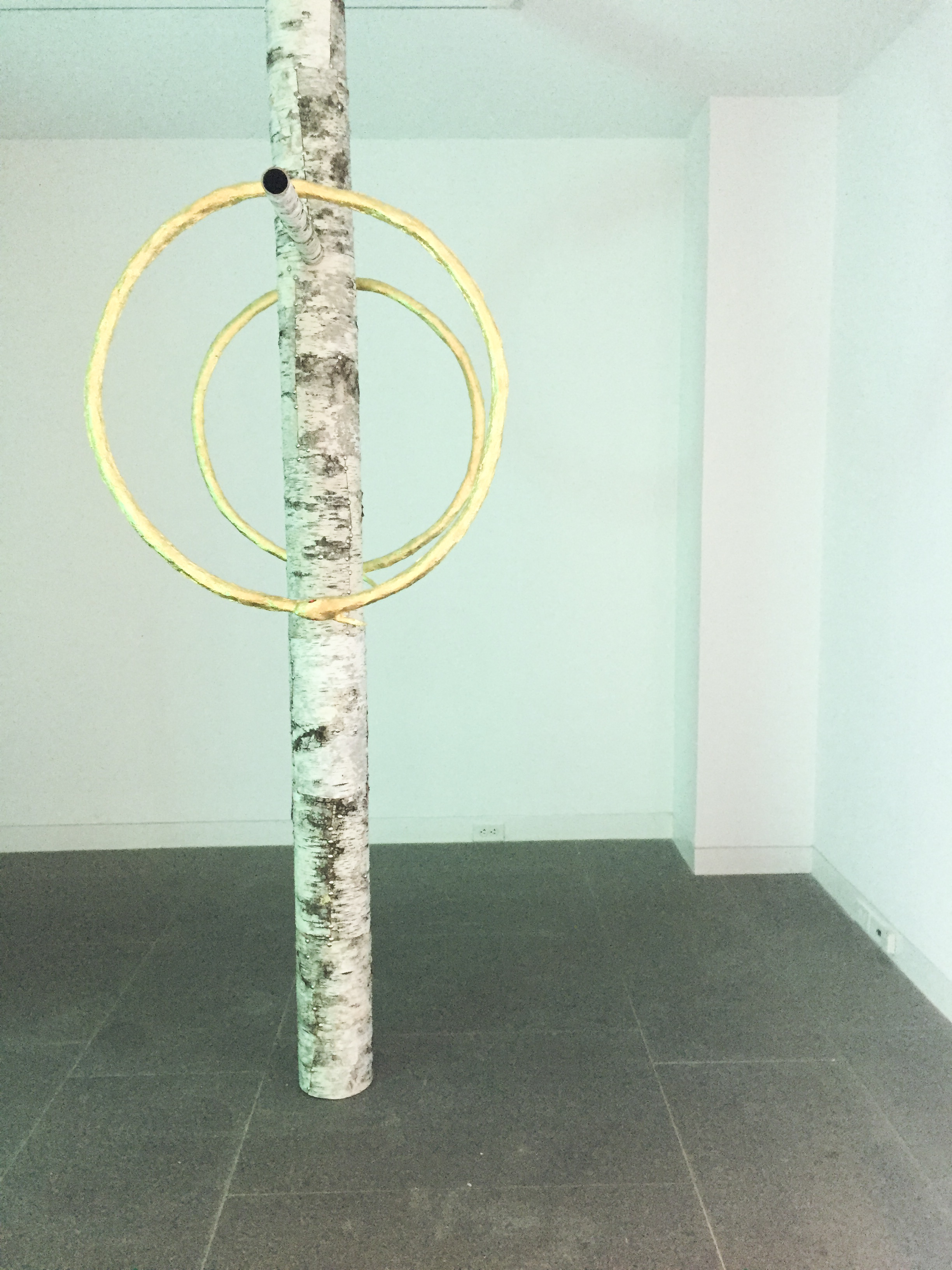 “In almost every work that I make, there is something of the American vernacular familiarity that you could look and it and understand what it is,” Mack said. “It’s not abstraction. Even if there’s some level of obscurity to it, I think in general my work references something in the world that viewers can latch onto part of and recognize. And that is similar to the culture of the fair.”

Mack’s own connection with her viewers also lies in the fact that she creates all her work by hand, which places it squarely in the overlapping zone between traditional craft—a typically accessible, universalized form—and traditional art, a field perceived as much more lofty and much less available to the general public.

“This is something I’m seeing a lot over the past ten years: so many artists are incorporating craft traditions into their practice,” Smith-Stewart observes. “And we always like to think of art over here and craft over there, but obviously studio practice is a type of craft.”

Walking the line between craft and high art, “Junk Kaleidoscope” features a mélange of mundane found objects worked into mind-boggling assemblies and painted with vibrant colors that play with the original role of the object before it became a part of Mack’s imaginative œuvre.

Arguably the star of the exhibit—and the most prominent piece in the room it inhabits—is a large panel of black Styrofoam with little slits designed for holding rings, which bears a mix of vintage jewelry and little word blocks narrating the story of a terminally ill girl who had her body cryogenically frozen upon her death. The piece, entitled “Wreath,” draws on a number of legacies, both in the stories that lie behind each ring included in the array, and in the individualized story of the young girl, who fought a stringent British legal system in order to get permission to have her body frozen after her death.

In another work, three glass jars are glued, tops facing the canvas, to a background of denim painted the color of rust, and filled with a bizarre juxtaposition of contents: one holds mini condiment packets, the other a shed snakeskin, and the third a handful of mini plastic boots. In fact, Mack uses this denim background, complete with pockets and belt loops, throughout her collection. She employs it in an amber hue as the backdrop to a fake violet flower, a bright green shade for a vertical canvas, and even as the backdrop to a pop art-inspired piece with the word “JUNK” printed in slanted graphic font. The proliferation of denim is one of the many ways that Mack references Americana, a theme that’s integral to her study of the fair and its many forms throughout the country. 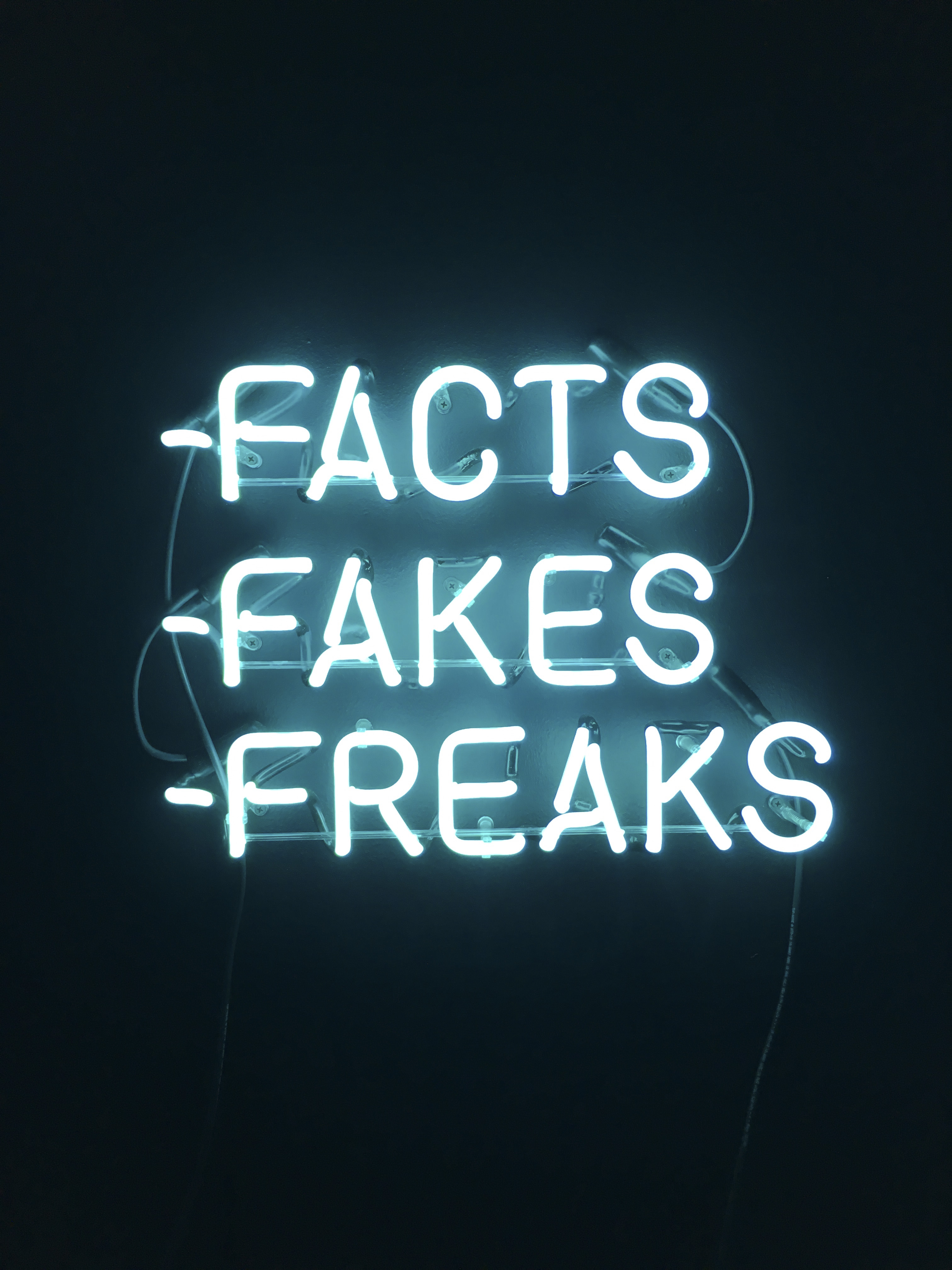 The exhibit’s display style is also deliberately designed to integrate the many themes that Mack considered throughout the past two years while she produced the works for this exhibit. A white pegboard, the material most fairs use to exhibit their entries, serves as the hanging wall for a number of pieces, and a closet-like construction of display shelves for sculptures subtly references domestic life. In the museum’s lobby, a mantelpiece-like structure made of plaster and gauze bears a straw wreath dotted with colorfully-painted corn cobs, playing again with domestic furniture and its role in Mack’s body of work.

“I guess I’m always trying to make objects that will make people look at them,” said Mack. “I don’t have any end goal, but I really want people to look at my work.”

And look we will.

“Junk Kaleidoscope” will be on view at the Aldrich Museum of Contemporary Art (about an hour drive from campus) until April of 2018, with the works being rearranged by the All’s Fair program in January.