Blender Benders: An Interview with the Blender Club Founders 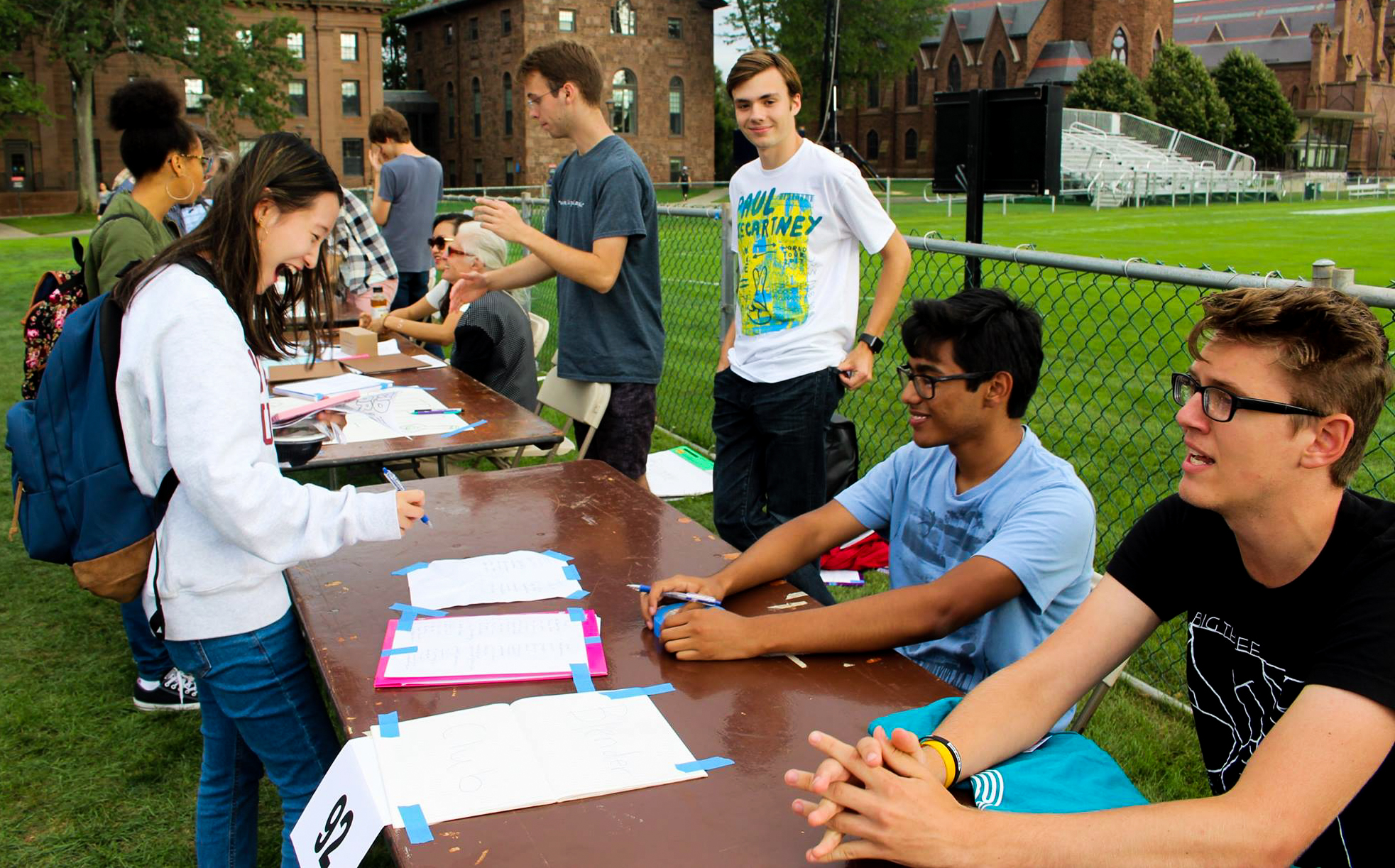 I stumbled upon Blender Club and its creators on a sunny afternoon during the 2017 Activities Fair held outside of Usdan. Taped to the table was a notebook with the words “Blender Club” scrawled in pen on its open page, and two smiling students—Dennis Kraus ’20 and Gilberto Garcia ’20—sitting behind it.

“What club is this?” I asked them, eyeing the hastily-made sign-up sheet.

In response, all I got was another shout of “Blender Club!” this time, accompanied by jazz hands.

I later learned that Kraus and Garcia had stumbled upon the open table at the Activities Fair, sat down, deliberated as to what unofficial club to advertise, and eventually decided on one dedicated to blending. Blender Club, then merely an idea, is now an official University club. Its purpose will be to give students a space to blend into existence all their viscous hopes and dreams, from banana smoothies to guacamole. Blender Club will have its first meeting within the next few weeks. I sat down with co-founders Kraus and Garcia to talk about its origin, where they hope to take the club, and the role blending has played in their lives.

The Argus: First off, why Blender Club? Why create it?

Dennis Kraus: It was a spur of the moment type of thing—we had to seize that opportunity. First of all, there was tennis at the table next to us [at the Activities Fair], and then they left, and so we just took the table. And then we started throwing around some club names, and Blender Club was the one that stuck out the most to us. We were originally going to be Hopping Fence Club.

DK: Yeah, those were the other two. But it sounded too dangerous to try to hop the fence behind me repeatedly. But that also seemed pretty fun.

A: But Blender Club was the one that really spoke to you?

DK: Yeah, definitely. I have a blender that’s underused. And I’m looking forward to rekindling its flame.

GG: I think we kind of thought of it because of our struggle of not having a blender last year. Like we’d want a milkshake, but we couldn’t get it!

GG: His grandma eventually mailed him a blender from home. And everything changed.

A: Did you make a smoothie?

DK: I made so many smoothies.

A: How many smoothies would you say you made?

DK: In a day or in an hour? Like seven per hour. No, I’d probably say I made them on a weekly basis, at some points. There were slumps, you know.

GG: Yeah, we just like got together, and blended stuff.

A: Was this just the two of you, or were other people involved?

DK: Yeah, other people were involved. Mostly just whoever we found around, within the Butts. It was Butts-exclusive, I feel.

A: Would you say you had this vision in mind when you created this club? These memories of community blending?

GG: I don’t think, at the moment, we realized it was going to be something bigger, and then at the club fair we were like, “Hey, I remember that one time when we struggled with blenders. People shouldn’t have to go through that.” So then we made it a club.

A: And then you decided to make it official later on. Why?

DK: Why! That’s a great question. I think the better question is, “Why not?” I just ran into this guy and brought up the idea, and as soon as I said it, he was like “Oh man, I gotta get in on that. I’ve been having smoothie trouble.” And it’s like, no one would have asked him about that! If blenders hadn’t come up, he wouldn’t have even known he had smoothie troubles. But we’re here to fix that.

A: Do you have a vision for what people will be blending?

DK: Everything! Well, actually, they can’t break the blenders. That’s something I’ve been worried about. But I want to get crazy with it. Papers, anything you want to put in there. Make music out of blenders. I want to have a music art show installation type of thing. I want to have themed blends, like blending pumpkins and Christmas trees. Every major event and holiday. Even not-major events and holidays! Every day should have a blender.

A: Gil, do you have anything to add?

GG: I think we can kind of go with the flow for the first couple meetings—

DK: We have no idea what’s going to happen—

GG: Right! So we’ll go with the flow to see what environment is created out of it, what type of people.

DK: This could go terribly. The goal of this is to blend people together through blending, but what if people don’t like to blend together? What if it’s more like a solo thing? What if people end up hating each other that are there?

A: So the goal of blender club is not sex, it’s blending.

DK: Yes. This is not some sort of metaphor. We’re not that smart. It’s just blending.

A: So you submitted the signatures to make this club official, and you got a response saying that this was an official club?

DK: Yes, and I went to a training as well, and they taught me how to get funding. They don’t cover food, so we sort of hope to rely on individuals to bring their own things, but I guess a little bit will come out of pocket, just to have general food to blend.

A: So what would you use funding for if you got it?

A: How many are you in the market for and how many do you currently have?

DK: I have my personal blender, which I’m quite fond of. As for how many I would buy, it really depends on how many people respond back. We had 60 people sign up at the fair. We’re mostly trying to find a space right now, it can’t just be a normal kitchen.

A: In what ways would you say blending has influenced your friendship?

GG: I always complain about expensive milkshakes. After he got the blender, it created more chances to meet up.

DK: We clicked. We actually hated each other before we had the blender. It elevated us to this other level, above everyone else who was not using blenders at the time.

A: So where does the club stand now?

DK: We’re figuring out the time and funding. I feel like funding should be rather easy; I really only have one thing to buy, and they said they would cover it. I’m looking forward to it. It’s exciting to me! Just because I don’t know what’s going to happen.

A: What about you, Gil? Are you looking forward to it?

A: And finally, what’s the recipe you’re most looking forward to making?

A: The guacamole here sucks!

If you’re interested in joining Blender Club, feel free to reach out to Kraus at dekraus@wesleyan.edu or Garcia at ggarcia01@wesleyan.edu.