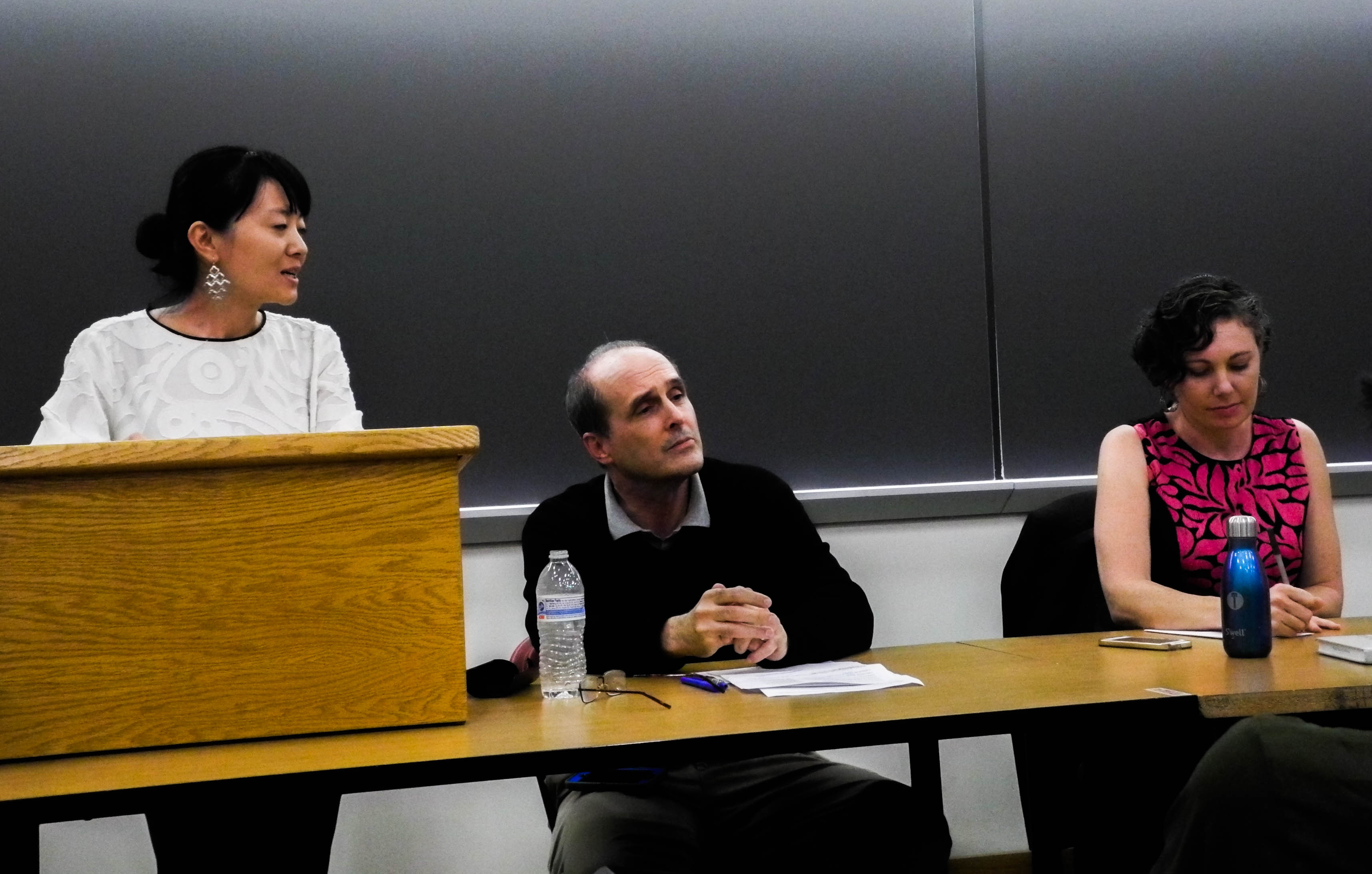 Professor J. Kēhaulani Kauanui introduced the Latinx Studies and Latin American Studies in Critical Conversation panel this past Wednesday. She stated that a dialogue between area and ethnic studies had been a long-time coming at the University. The event took place at 4:30 pm in Judd 116, drawing a large crowd of students and faculty to participate in a discussion on the boundaries of Latinx and Latin American studies and how each of these departments has evolved over time.

As Chair of American Studies, Director of the Center for American Studies, and a professor in both American Studies and Anthropology, Kauanui gathered faculty speakers from a wide range of disciplines including history; feminist, gender, and sexuality studies; and poetics. She encouraged panelists to explore the topics of diaspora, nationalism, and globalization.

Associate Professor of Spanish and Chair of Latin American Studies Robert Conn was the first to speak, beginning with an explanation on how Latin American Studies incorporate a variety of disciplines by its nature of being an area study. In his personal work, which generally focuses on Latin American writers, Conn discussed how he examines texts in the context of the intellectual tradition they stem from, the conceptual framework of the era in which it’s from, and from the place of the production.

The latter opened an exploration of the transnational space in which “Latin American” authors write, with Conn focusing on figures such as Alfonso Reyes, Roberto Bolaño, and Simón Bolívar, who he is currently writing a book about.

Schwartz explained that the answer was the Cold War. In the Cold War era, the United States government began supporting and creating institutions focused on area studies, searching for means to establish a North American presence abroad and to keep out U.S.S.R. communists. Over time, the discipline evolved past its neo-imperial beginnings and, after a wave of 1960’s student activism, became a space for other inherently transnational disciplines, such as gender and African-American studies.

Assistant Professor of Spanish and Latin American Studies Paula Park then drew on ideas introduced by Schwartz to ask where the Philippines belonged in this discussion. Though traditionally considered as part of East Asian Studies, the Spanish colonization of this Pacific island mirrors that of many so-called Latin American countries. Are Latin American area studies constrained to geography, or should it rely instead on shared cultural heritage?

Park ended her speech by highlighting a section from her current work, titled “Latin America in the Philippines,” which discusses Mexican philosopher Leopoldo Zea Aguilar’s trip to the Philippines in honor of one their late national writers José Rizal.

After these complex discussions on classifications of Latin America, Assistant Professor of American Studies, and Feminist, Gender and Sexuality studies Laura Grappo and Assistant Professor of English Rachel Ellis Neyra worked to shift the focus on Latinx studies, each presenting historical and modern perspectives on how to define the Latinx identity in the U.S.A.

Grappo began by summarizing the current state of Puerto Rico in the wake of hurricane Maria.

“Before I start I want to give a shout out to Puerto Rico, where 3,000,000 million people are without power, [where] a bunch of people died in a hospital last night because they had no diesel in the capital, and [where] they still have 60% of the population without drinking water,” she said. “Please continue to call your congressman and tweet at Trump.”

Returning to the discussion topic, Grappo listed several complaints about the relationship of Latinx and Latin American Studies, including what she perceives as Latin American Studies’ insistence on a formalized Spanish language (imported from Spain), the treatment of Latinx studies as the stepchild of Latin American studies, and the dangerous racial formations of Latinos. This latter idea stems from the typical way in which whiteness is constructed, which, as Grappo explained, was from a population declaring they are not black. Latinos, she says, are now at a crossroads as to whether to try and form a whiteness on the back of black people, or continue as a racially oppressed group.

Neyra followed Grappo with a complex historical discussion that focused on Puerto-Rican nationalists who considered the U.S.A. as an occupying power. She also mentioned the 2010 passing of Arizona’s SB 1070, which stridently opposes immigration and allows police to identify undocumented immigrants solely by sight. Neyra is currently completing a book titled “Cry Bomba: Listening to Brown Poetics,” which is centered on the historical demand for poetics in Latinx studies. The work will explore a wide variety of tactics, such as salsa and Indie music, live and multimedia performance, the novel, theater, poetry, and short experimental films, and will feature sounds of upheaval, protest, and sex in Latinx, Chicanx, and Nuyorican aesthetics.

At several points, the panel criticized the use of the term “Latino,” which, though ubiquitous in and outside academia, is a term stemming from racist associations with the white latin race of Europe (e.g. French, Italian, Spanish.). Kimberly Ortega ’20 asked the panel during the Q and A on finding a more appropriate way for the U.S.A.’s Latinx population to identify.

“I constantly ask that question about phenotype and what Latinos or Latinx should identify with,” she said. “That’s why I asked about it today. I’m constantly grappling with what do I identify myself as if there’s no real term.”

In response, Professors Grappo and Neyra suggested that language’s creative ability means that new terms could be put into use.

“They said I should make something up, so I guess that’s what I’m going to do,” Ortega stated.

For many of the faculty on the panel, the talk today allowed for them to present their findings of several years of research. Schwartz reflected on her own work and personal associations with Latinx and Latin American Studies.

This questioning led her to study the increasing movement between the U.S.A. and Latin American countries, and how such movement calls for a dialogue between ethnic and area study disciplines concerning the region.

“Immigration, I would say, is the most important aspect that will merge the two fields, at least in certain ways,” Schwartz said. “I’ve come to understand the phenomenon of immigration as key to the historical and ongoing relationship between Latin American and Latinx Studies.”

Kauanui looks forward to facilitating more events such as this panel in the future. She is currently working on organizing both a teach-in on DACA—the Deferred Action for Childhood Arrivals immigration policy of the Obama administration, which has come under question in the Trump era—and a panel on the state of Caribbean studies.