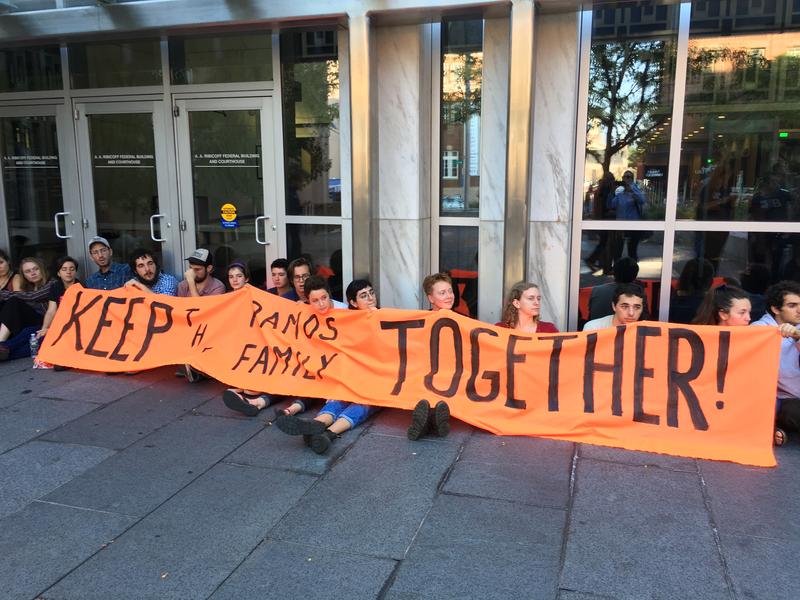 This past week, University student groups participated in multiple protests and demonstrations off campus as part of their fall agendas.

On Monday morning, a cohort of student activists from various groups on campus drove to Hartford as part of an action organized by Unidad Latina en Acción to defend Franklin and Giocando Ramos, a couple that has been living in the United States for 25 years and is now facing imminent deportation. As an act of civil disobedience, students from various colleges around the state sat in front of the Federal ICE building and blocked the doors, resulting in nine University student arrests and 35 in total.

The Ramos campaign has garnered statewide attention in large part because it represents the heightened scrutiny being placed on immigrants by law enforcement under the Trump Administration. Franklin and Giocando, both Ecuadorian nationals, immigrated to U.S. in 1993 and have two children who were born in the U.S. In 2012, Franklin was detained by ICE during a raid at his workplace which was a labor violation by the employer.

The University students who were arrested and gave interviews for this piece will be kept anonymous as to not complicate their court hearings in October.

“Because they were undocumented, they were treated as collateral and detained by ICE,” one of the Wesleyan demonstrators said. “Since 2012, ICE had been granting them stays of approval but then they reapplied in June and this one immediately bounced back and ICE said you have to be deported in the fall, and forced them to wear ankle bracelets so their every move is monitored. It is completely unprecedented for them to have ankle bracelets, which is clearly caused by the new administration.”

The Ramoses were scheduled to be deported this Friday, which sparked the protest, putting pressure on ICE and local officials to extend their approved stay. Over 100 demonstrators, including students from Wesleyan and Yale along with the family’s oldest son, Jason Ramos, showed up to block the doors to the federal ICE building at 8 am.

“We would move if someone needed to come in, but what happens is that once the security guards and ICE see us they feel really threatened by our presence and lock the doors so they try to make it look like it’s our fault if people with immigration appointments [miss] them but obviously that is not the case because they have back doors,” a protestor said.

The demonstrators sat for an hour before the police showed up at 9 am and arrested them on charges of disorderly conduct and criminal trespassing.

“We all went into this knowing the risks,” a demonstrator said. “We knew what we were getting ourselves into. We were trained and then trained even more once we got there by the ULA people.”

The protesters were kept in police custody for 13 hours before being released, which according to veteran Wesleyan activists who have gone through these types of actions before, is an unprecedented amount of time.

“The police did a lot of things in this particular civil disobedience that they hadn’t done before,” an activist said. “They at first said that we had to post a 1,000 dollar bail each to get out which is unusual for the charges. It seems like there is growing repression now that this is becoming a bigger thing, and more people are getting involved and the word is getting out. I think it is frankly just a pain and more labor for the cops so I think they were trying to incentivize us to not do this type of thing again.”

According to the Hartford Courant, Congresswoman Elizabeth Esty, whose district includes the Ramoses’ hometown of Meriden, has released a statement saying: “We’re heartened that it looks as if the agency will permit this family a 30-day stay to allow them to present their case.”

While the Ramoses stay has been extended, they have no guarantee that a federal court will re-open the case.

The next day, United Student/Labor Action Coalition (USLAC) provided transportation for twenty Wesleyan students to participate in a protest at Central Connecticut State University (CCSU), whose food service workers are in the midst of contract negotiations that could significantly impact their healthcare plans.

“It was really exciting to see that it wasn’t just representatives from unions statewide but also student representatives standing in solidarity with workers,” protester Finn Collom ’20 said.

“We did a picket for about an hour with chants and then marched over to the management building which we were not allowed to go into or we would get arrested,” USLAC organizer Sophie Martin ’19 said. “The manager came out and we got around him. Workers and students gave a short speech about why we were there and why the fight is important.”

Healthcare negotiations that CCSU workers are going through have resonance for workers around the state of Connecticut.

“Each individual contract needs to be protected because it starts this fear that it will have impacts for all of us,” Martin said. “These companies are giant and they all talk to each other so they all say well if this one school is willing to pay for their healthcare then most likely these other schools will too. Employer paid healthcare to make these middle-class jobs and without that, you can’t live on these jobs.”

With Wesleyan’s workers’ negotiations coming up in November, the outcome of the CCSU negotiations could have a significant influence on USLAC’s future organizing tactics.