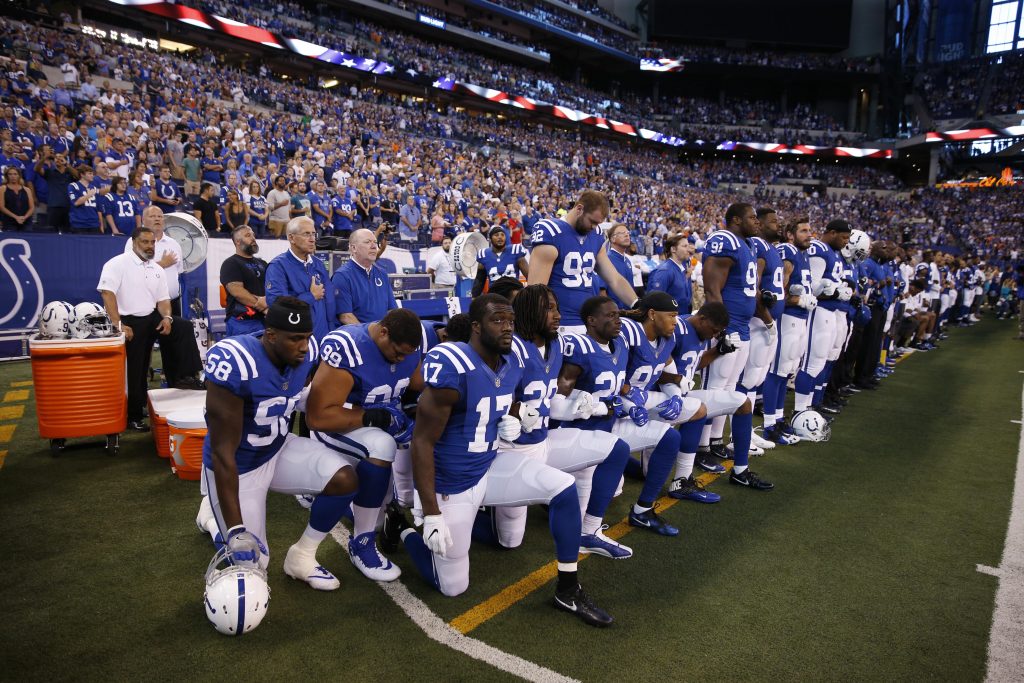 As per usual, the NFL will be at the center of the sports universe on Sunday, but this week, many will be watching for signs of protests during the anthem. What may seem like an old headline in our 24-hour news cycle, just last week, our president derided the NFL, its players, and its owners.

President Trump’s now infamous words were uttered at a rally in Huntsville, Ala.

“Wouldn’t you love to see one of these NFL owners, when somebody disrespects our flag, to say, ‘Get that son of a bitch off the field right now, out, he’s fired. He’s fired!’” Trump said.

I am from Pittsburgh, Penn. and am consequently a huge Steelers fan. I’ll be the first one to tell you we have the most Super Bowl rings. Another special aspect of the team is that a former Army Ranger starts at left tackle; Alejandro Villanueva served three combat tours in Afghanistan before joining the team. This past Sunday, the Steelers had planned to stay in the locker room during the national anthem. As Coach Mike Tomlin, one of the NFL’s few African-American head coaches put it, “We’re not participating in the anthem today—not to be disrespectful to the anthem but to remove ourselves from the circumstance.” This prevented any Steelers players from being put in a situation where they had to choose between kneeling in protest or standing with their teammate, a veteran. But rather than stand unified, away from the anthem, Villanueva was photographed standing alone outside of the tunnel ahead of his teammates, who remained in the tunnel. This inevitably led to comments of confusion from his teammates, displeasure from his coach, and regret from Villanueva himself.

This Sunday, the Steelers say their plan is to stand in unison. Their owner, Art Rooney II, released a statement stating that the team staying in the tunnel this past week was not meant as an anthem boycott. However, everyone who deems these kneeling players as disrespectful to America and its military veterans knows exactly what they are doing.

In an Argus article last week by Rosa Munson-Blatt ’21, she highlighted Colin Kaepernick and the NFL ratings decline. The comments left by readers referred to the events in racist terms disguised as patriotism. These distracting comments along with the discourse of anthem protests change the narrative from why the players started kneeling in the first place. The fact of the matter is that people of color in the United States are marginalized and constantly live at a disadvantage. They simply do not enjoy the same liberties and freedoms that Caucasian Americans do. Several players, including Malcolm Jenkins of the Philadelphia Eagles and brothers Martellus and Michael Bennett, kept this message at the forefront. However, it required vicious, profane attacks from Donald Trump for the owners and many players to be unified in such demonstrations.

No one wants to be put in a position in which others claim that they don’t love their country enough. Especially for professional athletes, who have an enormous amount of media attention, such situations can be damaging and have even led to blacklisting or being functionally banned, as we have seen with Colin Kaepernick. Additionally, having a military veteran on a team makes it even more challenging for a player to choose to kneel because the conversation has been crudely transformed into a discussion of patriotism. But patriotism has nothing to do with the first time a knee was taken and should not be a part of the discussion now either.

One of the beauties of sports, especially in America, where athletes are treated like celebrities, is the platform that they possess. Professional athletes are watched by millions of people every day. From Jackie Robinson, to Muhammad Ali, to Tommie Smith and John Carlos at the 1968 Olympics, African-American protests have occurred in sports for quite some time. It is important to point out, however, that the protesters’ issues are not with the flag. Instead, they are protesting the system of oppression and inequality that they are forced to endure day in and day out. By protesting—in the case of NFL players, taking a knee—they can put pressure on those in power in ways that regular citizens cannot.

I must recognize the privilege I have. I am white, straight, and a male. I have the privilege and ability to write this without any serious repercussions. I’ll be able to continue to play the sport that I love so much here at Wesleyan: Ultimate Frisbee. For many players, though, in the NFL and elsewhere, they do not have that luxury.

Athletes have the power to be forces of change using sport as their vehicle. In the instances of NFL players taking a knee during our national anthem, this can be an effective tool in bringing awareness to inequalities in the United States. However, their cause is being stripped away from them and is instead being framed in terms of patriotism. The white privilege of politicians, many fans, and even owners, can hopefully allow a reframing of the conversation and a reevaluation of equality in America.