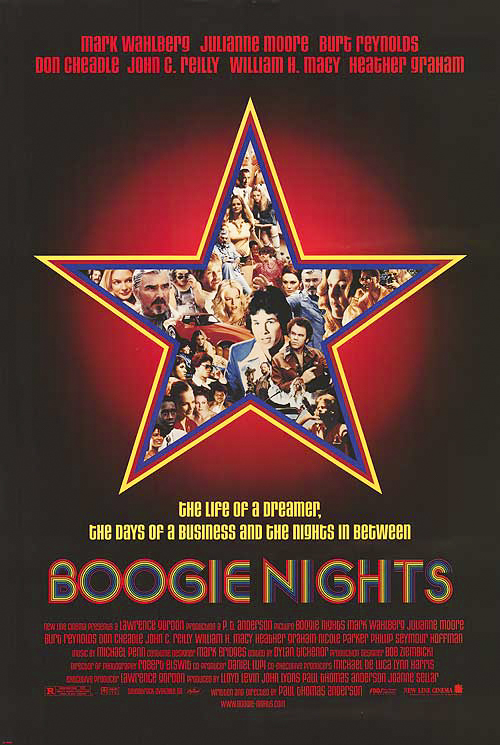 Paul Thomas Anderson’s “Boogie Nights,” (1997) which played last week at the Wesleyan Film Series, presents a world so overtly lacking in political content that, on its face, it may seem out of touch with a contemporary audience, entrenched within a pop culture that cannot escape the political realm. However, this reading of the film would be overlooking the work’s subtleties, which reveal an underlying warning about the effects of apoliticism: the absence of civic consideration ultimately becomes the political message. Within Anderson’s depiction of the enthralling yet extremely dark netherworld of the pornography industry—obsessed with body image, exercise, and sexual adornment; plagued by drugs, violence, and narcissism—it is no coincidence that the only political imagery we see is a portrait of President Ronald Reagan, the only president (at the time) to come from the entertainment world. The image of Reagan is never addressed but hangs omnipotently in the background of every shot of a harrowing courtroom scene late in the film. This moment, where the presence of political power is blatantly ignored, concretizes one of the film’s central themes to investigate the values and cultural forces reflected in the extreme subculture of the entertainment industry, which lays the groundwork for the rise of Reagan.

Just as quickly as Diggler rises to fame, he falls. He becomes addicted to cocaine, which leads to bouts of erectile dysfunction. Then their new films start to bomb. In a fit of frustration, Diggler screams at Horner, who has found a new teenage star, and then quits, spiraling into abject poverty and manic schemes to steal drugs. Diggler ends up where he started, jerking off for money until he’s beat up by a group of kids who scream homophobic slurs at him. Poor, hungry, and homeless, he returns to Horner, whose career has suffered since Diggler left, and they embrace.

In a mere plot line analysis and summary, it is difficult to capture how unbelievably funny the movie is, especially the character of Dirk Diggler. While the film displays the ironic and self-referential tropes of ’80s and ’90s cinema, Paul Thomas Anderson uses these mores to question what exactly it is about the movie that we find so comical, leading to an even darker realization about our complicity in the despair depicted in the film itself. The reason why we laugh at these characters becomes a key element in Anderson’s broader commentary on porn and irony in the film, which fittingly came out a year after “Infinite Jest” was published, in the era where the first murmurs of new sincerity started to appear. Our amusement goes something along this line: Diggler and his circle of friends admittedly are not very bright. They spend their days lifting weights, snorting cocaine, and having sex. They live, by most standards, empty lives. But the ironic humor arises with the fact that they take themselves seriously. They believe that they’re making real art that speaks to people’s everyday lives. In one scene, Diggler gives an over-the-top, egotistical interview in which he claims that his films improve married couple’s sex lives and thus lead to happier and longer lasting marriages. He sees himself as a civil servant.

But the film isn’t just about the crisis of the modern artist. It also centers around the average American and a loss of what it means to actually be an American—what we should aspire to and what binds us. Anderson has explored these questions in relation to the American dream throughout his oeuvre, which cannot be understood without them. Diggler fits an archetypal character mold set for a meditation on the American dream: ambitious, middle-class background, seeking to make something of himself. In one reading of the film, Diggler might represent the fallacy of the American dream and its illusory promises, instilling in Americans an all-consuming desire that drives the capitalist machine at the cost of a moral compass. This certainly is the case for Anderson’s “There Will be Blood,” but it seems too cliché for “Boogie Nights,” which replaces industrious, capitalist drive with sex drive. The desire for success and authenticity, which might be associated tangentially with some notion of the American Dream, appears wholly antiquated in the modern world, which opts for sexual stimulation and distraction over artistic innovation.

As Anderson displays in “There Will Be Blood,” the American dream has profound flaws and inherent contradictions. It once gave people a common vision and yet now is something to laugh at—it’s just ironic. That does not mean Anderson calls for a revival of some ideal common vision as obsolete as the American Dream. But the despair, addiction, violence, and pain that Anderson presents certainly reveals that we need to give people something sincere to believe in—something more, at least, than irony and cynicism.

The brilliance of “Boogie Nights” lies in the way that it takes a world that would appear irrelevant, if not antithetical, to political discourse, and draws a causal linkage between the two. How could the “depraved” world of porn, which represents everything that traditional conservatism loathes, actually coalesce into the eventual election of one of the most deeply conservative presidents in American history? Anderson proposes that in a country without cultural or political direction, a slogan that reads “Let’s Make America Great Again,” (the original one), and that fabricates some fictional past that never existed, seems like the best bet. It fills the void. What should scare us is that we keep laughing.

Twenty years later, audiences find “Boogie Nights” and its sincere, honest Dirk Diggler just as naively humorous as they did in 1997, which suggests that we have not yet escaped this milieu of irony. It may not be surprising, then, that when the same campaign slogan came around in 2016, it worked just the same.