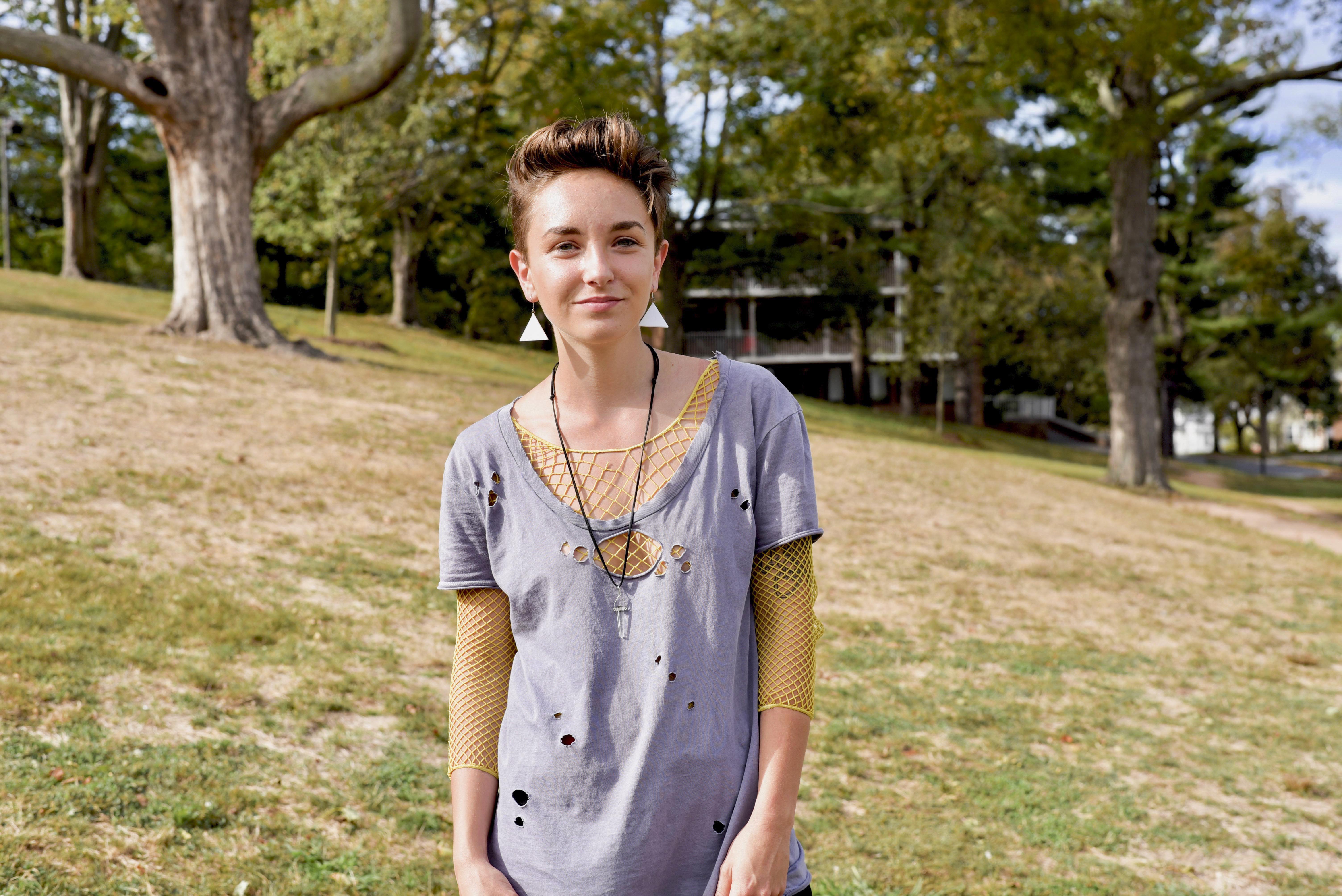 If you’ve ever worked in the Digital Design Studio, heard some awesome slam poetry, or scanned through WesAdmits, you’ve probably come across Giorgia Sage Peckman ’18. The bubbly artist and secret martial arts master sat down with The Argus to share their thoughts on design, the Wesleyan experience, and the best way to get out of a crowded party in a hurry.

Giorgia Peckman: I can be pretty amicably antagonistic, which I think people remember. I definitely kicked a screen out of a window on Fountain like two weeks ago. I didn’t break the window, but I had to get out. The party was so crowded. It was wall-to-wall, body-to-body. Someone I was with needed to leave stat, and they were trying to be really polite and get to the door. We were near the window, and I was just like, the door’s not gonna happen. It’s time to go through the window.

A: Speaking of wild parties, where’s your favorite place to go on the weekends?

GP: I used to be a concert person, but this year I’ve been on Fountain a lot. It’s totally different when you’re a senior, at least that’s what I’ve personally realized because all your friends live there. I live on Cross Street, so my housemates and I will just walk out our back door and we’re on Fountain. I love dancing, so I always hope I can find a party that has dancing. This is actually my first year at Wesleyan doing dance in a legitimate way. I’m in a dance class, which has been on my Wesleyan bucket list since I was a freshman.

A: So you dance, but you’re also a studio art major. Tell us about that.

GP: I was originally going to major in biology, but ten days into my freshman fall, I had an epiphany and called my parents, who are both designers, and told them I wanted to do graphic design instead. I don’t really consider myself an artist just because a lot of graphic designers do artistic things and are trained in fine art, but it’s more commercial or problem-solving. For example, I’m given a set of variables that I have to work with and then configure it in the most successful way, whether that’s to sell something or to help people. I don’t really like the selling things part of graphic design. I have to employ artistic skills, but I don’t think most of what I make is really art. I’m also the manager of the digital design studio; that’s my work-study job. I try to keep things from getting too insane there.

A: Do you have any idea what you’re going to do for your thesis?

GP: Yeah. I’m making the branded identity of a fictional world’s fair, as well as artifacts and products exhibited at that fair. I’m looking at how design and world’s fairs historically are a physical manifestation of globalizing forces that shape identity. So I’m basically looking at how design and material culture defines who belongs and who doesn’t, as a citizen and as a member of society.

A: How do you see yourself pursuing graphic design career-wise?

GP: That’s something I’m trying to figure out right now because I worked in an advertising agency this summer and hated it. I can’t hustle enough to do freelance; it’s hard to pay the bills. But I’m really interested in graphic design in the public sector; it’s just harder to find work doing that. There are private sectors that do information design for non-profits and government agencies where they design how things are presented and structured within systems. I’m a visual designer, but I can see myself departing from that. It’s kind of like if there’s an issue in New York about how children pay for the subway —I’m totally making this up off the top of my head— like unaccompanied youth have to get to school across boroughs and they can’t afford it (New York has subsidized fares), the idea is actually structuring what the system would be that would get those children on the paid subway. So I’d figure out the series events that they’d have to go through and design the forms and the promotion of that, like how it’s disseminated to children and families.

A: You’re also rumored to be quite the writer. Is that something you’ve done your whole life or did it really flourish at Wes?

GP: I did writing [in] all of my primary schooling in San Francisco, and then sorta changed that up when I got here. I used to run WeSlam, which is the campus slam poetry group, but this year I’m free. I took a writing class last year, but it’s become more of a thing I just do for myself or to form communities, rather than trying to pursue it in a serious capacity like I assumed I would when I was in high school. Every now and then if I accumulate a lot of writing, I’ll make a little zine of my work, so I’ll design that myself.

A: Do you ever see yourself going back to San Francisco?

GP: San Francisco’s still my favorite city in this country, but I don’t necessarily see myself going back right away. But I do a martial art form called capoeira, popularized by “Bob’s Burgers” but not accurately, and my school and my teacher are there. She’s been my teacher since I was six, so I kinda have to go back there to train. Much to my chagrin, I’ve grown to love New York. My friends are there and I have extended family there. So who knows? There’s a whole world out there and I don’t want to limit myself to San Francisco.

A: Are you excited for the greener pastures of the real world or are you in that stage of senior denial?

GS: I think both. I think there are a lot of things that I want to do that I obviously can’t do when I’m here. It’s a big world out there, but it’s also really scary that it’s a big world out there. I’m very comfortable in my one square mile of Middletown. I think the biggest thing, which my friends and my housemates have said too, is not so much the idea of leaving and not working, but losing the social component. All your closest friends and favorite people are only a five-minute walk away, and that’s not necessarily true of the real world. So I’m excited about the possibilities post-Wes, but unsure of the reality.