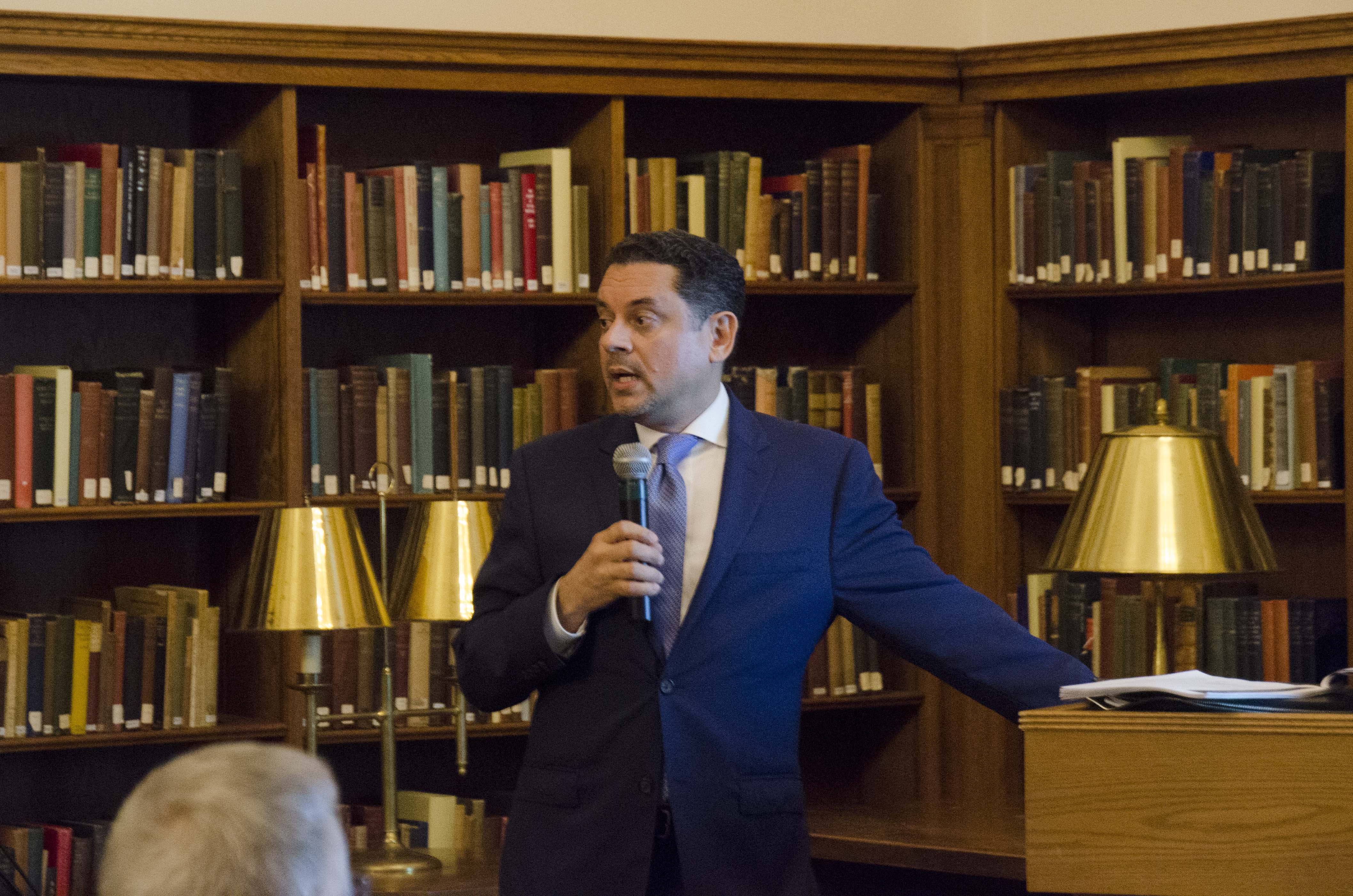 On Monday night, Olin Library held its annual Constitution Day lecture in the Smith Reading Room. The event was open to students, faculty, staff, and the general public in an effort to engage everyone in the greater Wesleyan-Middletown community. The Friends of the Wesleyan Library invited José Luis Morín to provide the lecture, which was entitled “The U.S. Constitution, Puerto Rico, and the Unfinished Business of Realizing Our Best Ideals.” Morín is a professor in the John Jay College of Criminal Justice at the City University of New York (CUNY), as well as chair of the school’s Latin American and Latinx Studies Department. His academic specialties include criminal justice, civil rights, Latin American studies, and human rights law. He is the recipient of the 2007 “El Award” for his contributions to the Latinx community and was named a Kellogg MSI Leadership Fellow in 2005.

Morín began his lecture by articulating the importance of the U.S. Constitution in shaping our policies, particularly those that set a precedent for Puerto Rico’s function as an American territory.

Morín believes this perception is often untrue, especially when examining the relationship between America and its foreign territories. He argues that people from Latin and Pacific countries have been seen as unworthy of autonomy since the very beginning.

The American ideal of Manifest Destiny created a widespread belief that many former Spanish colonies should belong the United States, a belief which was intensified by the racial and cultural perceptions of “alien races” as inferior to Anglo-Saxons. They were seen as unruly mongrels, unable to manage their own affairs. Thus, in 1898, the U.S. took Puerto for itself, feeling justified because of the race of its inhabitants.

“The Mexican war was resolved by the Treaty of Paris of 1898, an interesting document which conveyed upon the U.S. Congress the right of determining the political status and civil rights of the people of Puerto Rico and all the other colonies that had been taken by the United States in the war,” Morín explained. “This treaty becomes fundamental when the United States Supreme Court starts looking at the rights of those peoples in those territories of the United States…. This idea that these alien races could not be part of the United States or be considered as people who could be incorporated comes out in a Supreme Court case. The Downes v. Bidwell case articulated that these alien races were not ready for the blessing of a free government under the Constitution to be extended  to them.”

Since Downes v. Bidwell has never been overturned, Congress’s plenary powers still imbue them with the right to decide Puerto Rico’s fate. Since the 1898 treaty, Congress has struggled to define the status of Puerto Ricans, asking what it means to be an American citizen living in an unincorporated territory.

“What should we do with these people and what should we call them?” Morín explained of Congress’s logic. “Do we call them subjects? Do we call them aliens? We don’t want to be known as an imperial power that has colonial subjects or that has aliens. Therefore, we’re going to adopt the term ‘citizen.’ In adopting the term, however, we did not understand that we would be giving those people native rights that people living in America did not want them to have. ‘Citizen’ indicated allegiance on the one hand and protection on the other…. The one thing that stands out [in the congressional ruling] is that it says nothing about rights.… In other words, Congress says that these are not Americans. This leads to what Puerto Ricans face today. They’re still not citizens…. There was never a vote asking Puerto Ricans if they wanted to be Americans, in fact, there was a vote to retain Puerto Rican citizenship.”

Puerto Ricans filed several cases to the Supreme Court regarding their desire for defined rights. Their argument is that if they’re citizens, why aren’t they getting rights? As Morín explained, it all comes back to Congress, who decided to award commonwealth status to Puerto Rico in order to diminish the perception of America as a colonial power.

“The term ‘commonwealth’ obscures the true colonial nature of the relationship between Puerto Rico and the United States,” Morín said. “Commonwealth was simply a way of renaming colonial status since Puerto Ricans are not free to decide on the economic or social policies that most affect them…. U.S. laws apply to Puerto Rico without the consent of the governed, which is essentially what a colony is. Puerto Ricans can’t vote for the U.S. president, they can’t make decisions that affect them including being conscripted into wars, Puerto Ricans have no voting representation in the Congress, all state functions are held in English instead of their native language, and they have no say in monetary policy.”

These restrictions on Puerto Rican citizenship have become extremely prevalent in their current economic state. Puerto Rico has a debt of at least $73 billion, a sum that is out of the realm of possibility in terms of repayment. As Puerto Rico cannot declare bankruptcy, they must repay all of their debt obligations themselves, obligations that, by law, must be resolved before the government can pay for Puerto Ricans’ basic needs like jobs, salaries, pensions, and schools. In the end, Puerto Rico is at mercy of Congress, for they have no authority over their own affairs. So what can be done?

According to Morín, awareness is key.