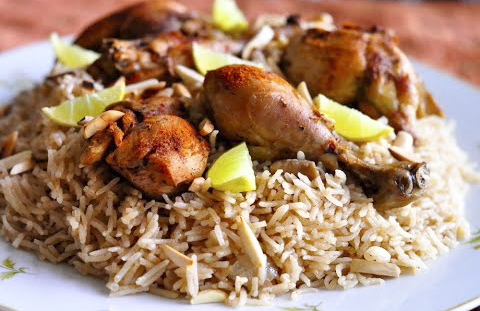 My friend Radwan is a fellow student cook currently finishing up his accounting major at Damascus University. He lives in a small house in the government-occupied section of the Syrian capital. The house is always filled with his extended family, all of whom are food lovers. According to them, there is nothing better than their grandmother’s cooking, especially her mandi.

Mandi is a rice dish made with chicken or lamb, frequently served at family celebrations and holidays in many Muslim countries. The dish originates from the southern Arabian peninsula, more specifically Yemen. Because of its fascinating flavors and flexible ingredients, the recipe has thrived throughout the Persian Gulf, Jordan, and Syria.

Radwan’s family serves their version during Eid al-Adha, an annual Muslim holiday that typically lasts for three to four days. The celebration, also called Sacrifice Feast, last happened in Syria from June 24 to the 27th. I remember this because Radwan complained constantly throughout the event about waiting for his grandmother to serve her enticing mandi.

8 cups of water or chicken broth

Submerge the rice in a large bowl of water and soak for two hours before cooking. Wash before using.

Place a large pot over medium heat and add butter, onion, water/chicken broth, pepper, garlic, and rice. Let this come to a boil and then bring down to simmer. Cook 25-50 minutes until desired tenderness.

While the rice is being cooked, preheat your grill. In a big pot mix all of the seasonings and oil.

Cover the chicken with the mixture and let it cool in the refrigerator for 10 minutes.

Wrap the chicken with aluminum foil and put it on the grill for 25-35 minutes, making sure to flip every 10 minutes.

When the chicken is about to be done, unwrap the aluminum foil and let it sit on the grill for five minutes to absorb the smoky flavor.

Fill a large plate with rice and then lay the chicken on top. Cold yogurt or a vegetable salad makes a great side.

In case it is hard for you to find a BBQ grill or you don’t want to make a big mess, the Syrian method to make Mandi is a great, cleaner approach to the recipe.

Season chicken like described above. Preheat your oven to 450°F and cook the chicken for 10-15 minutes. After that, turn oven down to 350°F and roast for 20 minutes per pound.

Meanwhile, cook the rice. Once the chicken is done, cut into bite-size pieces and mix into the rice. Make room in the middle of the pot and place a metal or glass cup (you are going to most likely ruin this cup so use an old one).

Add three tablespoons of vegetable oil into this cup. Heat a piece of coal on the stove until it turns red and place the red ember in the cup. Quickly close the pot cover and throw a piece of cloth over it to keep the smoke inside. Hold this for a couple minutes and try not to set your kitchen on fire.