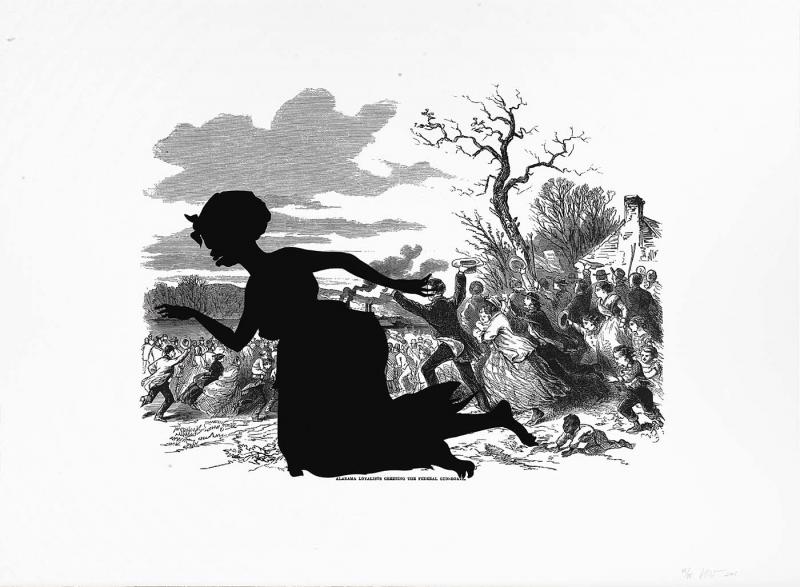 It was once said of Jean-Michel Basquiat that he painted Black kings because “the world doesn’t celebrate Black kings.” This Tuesday, Sept. 19, an epic celebration of Black kings (and queens) arrived at the University in the form of an exhibition entitled “Black Pulp!” Running at the Zilkha Gallery until Dec. 10, this brilliantly curated exhibition showcases the work of Black artists from 1912 through 2016. It features works from a variety of artists, among them Kerry James Marshall, Derrick Adams, and Wangechi Mutu. The works on display include painting, collage, film, drawing, and print, which serve as representations, celebrations, and reclamations of Blackness.

To inaugurate the exhibit this week, three Wesleyan professors (Professor of History Demetrius Eudell, Assistant Professor of Sociology Courtney Patterson-Faye, and Associate Professor of English and American Studies Amy Tang) each selected a piece from the exhibition and discussed its significance with the audience. One of the show’s curators, William Villalongo, a Brooklyn-based artist, added to their discourse with further details and information on each work. After this, visitors were free to mill about and admire the stunning pieces. The night culminated in a brief speech and Q&A session with Villalongo himself.

The art featured in “Black Pulp!”, while extremely modern, finds its inspiration in Black history, referencing the past, present, and future simultaneously. It also brings to light the ideas of self-representation. For so long, an image of people of color has been created and perpetuated by white people. Art, specifically with the works showcased here, is an excellent opportunity to counteract this trend.

One piece by Felandus Thames enacts such a reversal by portraying a man in minstrel costume with his face obscured by rock salt. Thames literally took a white-curated image of blackness and covered it, creating his own representation.

One of the essential questions implicit in “Black Pulp!” is why it’s being shown at Wesleyan in particular.

“Oftentimes we lose sight of the historical nature of how this institution is built on native land,” Patterson-Faye pointed out. “It was probably built by people of color who don’t get the same rewards as most of the student population of Wesleyan. An exhibit like this being in a predominantly white institution is yet another way of showing that Blackness, womanness, queerness, disability, has always been a part of the narrative, but has for too long been made invisible.” 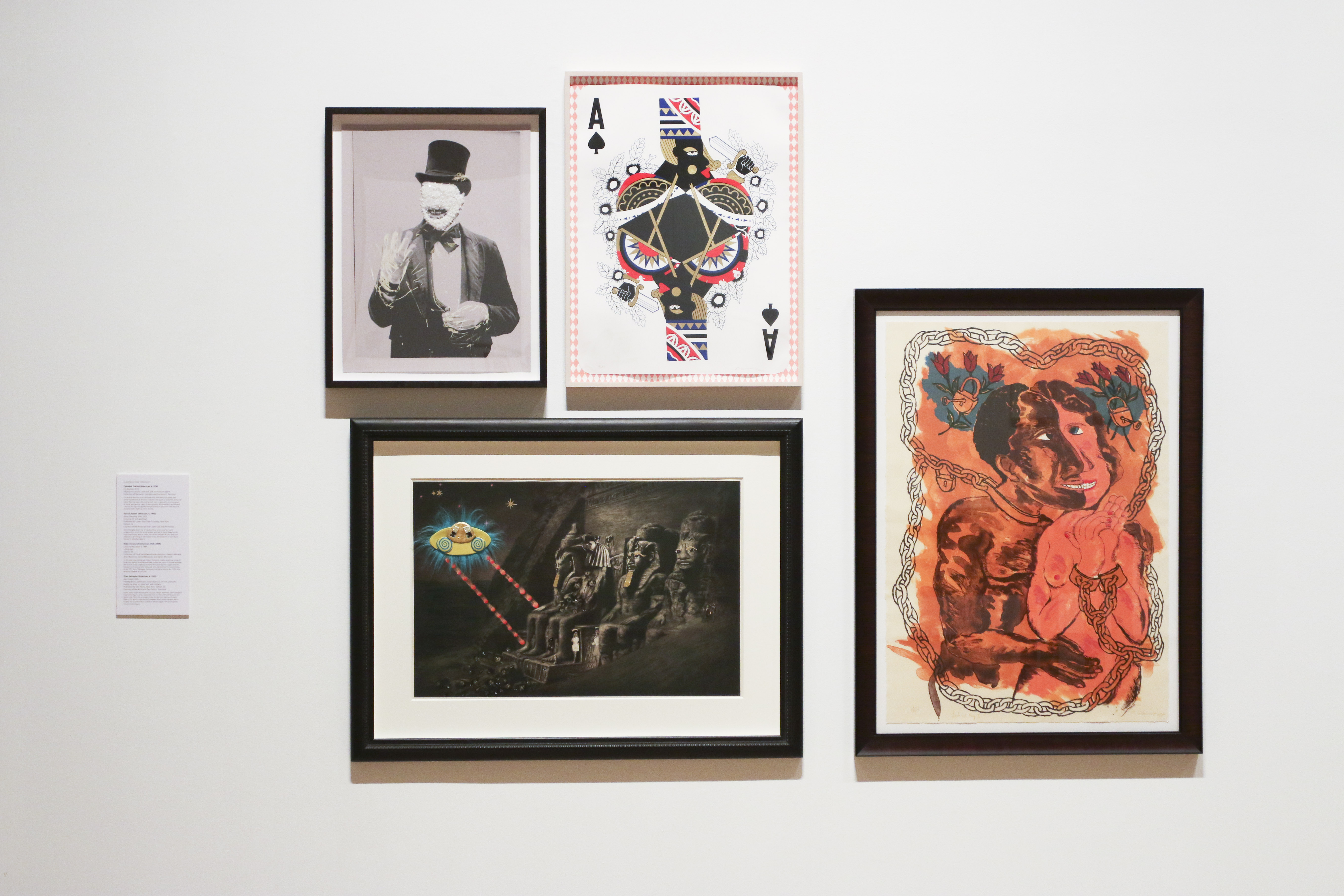 It is all too easy to forget privilege, and there is a hell of a lot of privilege here at Wesleyan. As Patterson-Faye so eloquently points out, “Black Pulp!” is an important reminder of the history following and haunting our everyday lives. This exhibition functions in many ways as a megaphone for the voices of the forgotten, those left out of the privilege that many here at Wesleyan take for granted.

Another theme potently woven throughout the exhibit is that of identity. For so long in art history, there has been a significant amount of dialogue surrounding the “Black artist” as opposed to the “artist.” Some seek power from the identity of Black artistry, while others (including Basquiat) detest it.

“You have to go back and realize the entire discussion of black identity has been an evolving one,” Villalongo said. “From chattel slavery, where people were property, presumably without a culture, without a history—how does one then move into a discussion of full humanist and identity?”

There is no singular “Black identity,” as Villalongo points out: it is constantly evolving, growing, and changing.

“It’s a luxury at this time…that we can even have an argument amongst ourselves as to whether or not we want to talk about the notion of a ‘Black artist’ or not,” Villalongo continued. The mere presence of the debate is a mark of the evolution of Black identity and Black image.

The mere presence of the debate is a mark of the evolution of Black identity and Black image.

Race, however, isn’t the only form of identity brought up by the works in “Black Pulp!” Several beautiful womanist pieces featured in this exhibition, chief among them Wangechi Mutu’s “Snake Eater,” a stunning lithograph of an African woman with a bird’s head eating a snake. This piece adds to the conversation regarding power and empowerment, and the way that art and self-representation give power to those who are marginalized. Discussing race without gender—or gender without race—would be a somewhat empty dialogue, but Professor Patterson-Faye’s thoughts and speech beautifully weave the two issues together within the context of artistic expression.

“Black women founded [womanism],” she said, “and it is about loving black women, whether it’s a romantic or a platonic relationship.” 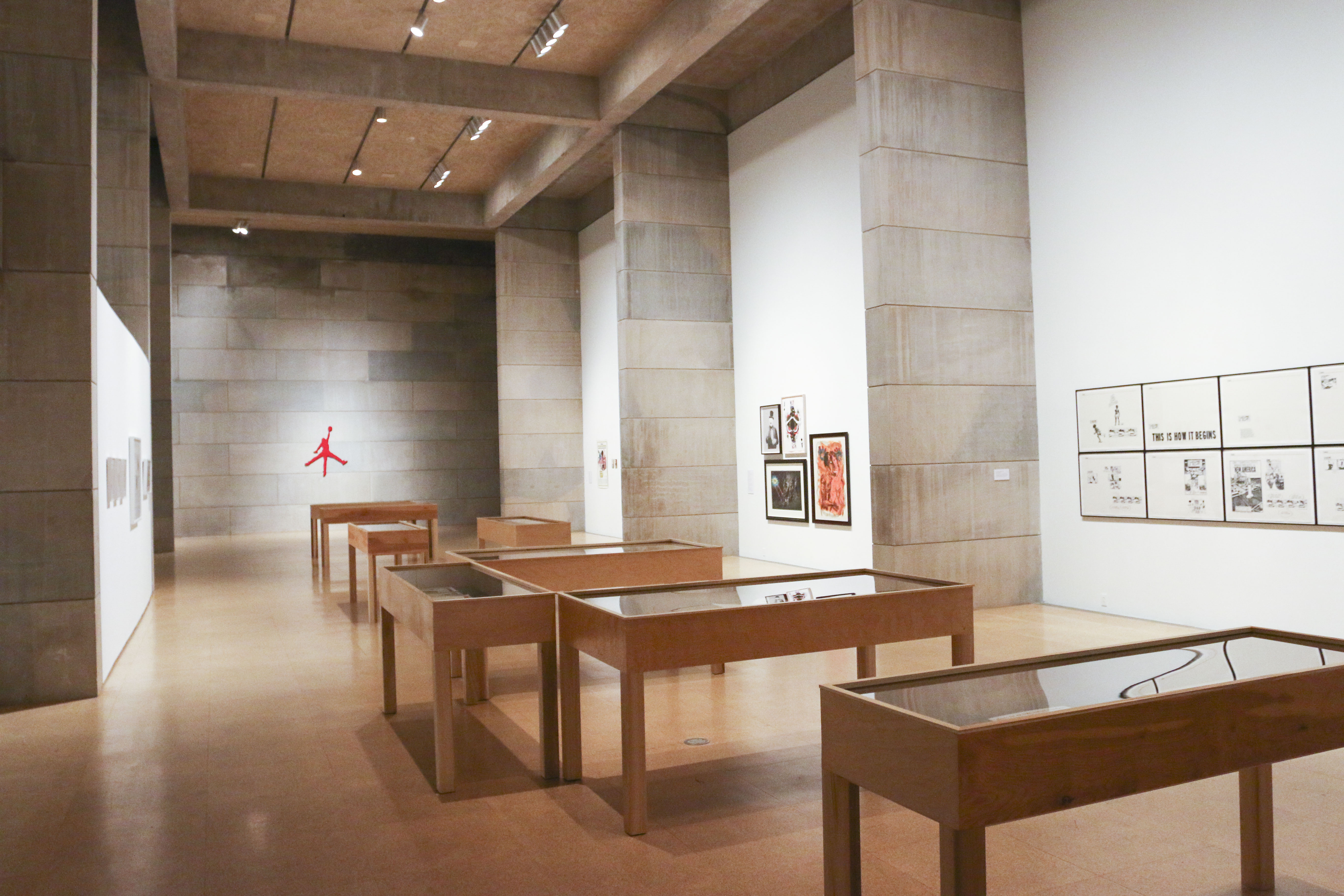 Art is a way to project our thoughts, feelings, and experiences to a broader audience: to be seen. The pieces in this exhibit showcase what it is to be Black, what it is to be a woman, and, what it means to be human. Art is a voice; it is a means of expressing what lives very deeply within each of us.

“Particularly for black people, for indigenous people, for poor people, for disabled folks, for trans folks, for queer folks, they have often made a way out of no way,” Patterson-Faye said. “[Art is] a way into political conversations, a way of evoking emotion and academic thought and action or arresting a sense of calm, a sense of peace, a sense of rousing, a call to action.

Art is a form of power. The paintbrush is, in many ways, mightier than the sword. Art is a way to create and to discover something greater than ourselves.

“Artists are looking at questions about our society, about our politics, about our humanness, and putting that into image, into music, into writing, film,” said Villalongo. “The best definition of what artists do is we talk about what it means to be human…it seems worthwhile.”

It is impossible for words to fully capture the power of this visual art. And perhaps it is impossible for me, as a white writer, to give proper gravity to the subjects at play. All I can say is, go see “Black Pulp!” while it is here at Wesleyan. You won’t regret it.

Mae Davis can be reached at davies@wesleyan.edu.