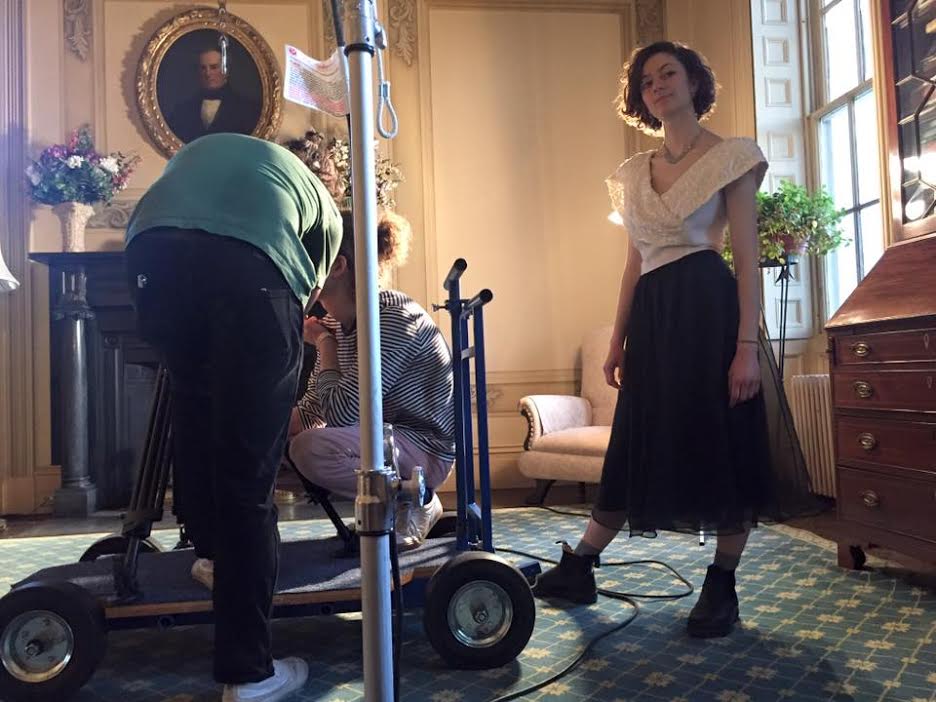 Whether she is directing, designing costumes, or acting, Sofie Somoroff ’18 has been exposed to student theater and film productions on campus from just about every angle. The theater and Film Studies double-major sat down with The Argus to discuss her thesis, how she started in costume design, and the craziest theater productions that she has been a part of on campus.

The Wesleyan Argus: Why do you think you were nominated as a WesCeleb?

Sofie Somoroff: Honestly, I don’t know. Since coming to Wesleyan, I was always very involved in theater here, and it just is by nature something that’s very public.

A: What would you say is one of your favorite parts of being in the theater community at Wesleyan?

SS: Definitely meeting and collaborating with people, which is a reason why I do film here, too. Collaborating is all about generating new and exciting ideas. I did a lot of theater in high school, but coming here totally changed the way I view it and introduced me to so many new incredible people.

A: Are you interacting with these people mostly in the theater and film classes that you’re taking, or in the projects you work on outside of the classroom?

SS: I didn’t come here planning on majoring in theater—I did come here hoping to major in film—but I got really involved in the student theater here. I tended to be involved with some totally wacky productions, starting even my freshman year. Student theater is the big thing that really introduced me to most of the people who I still remain very close to and work with. But academically as well, you do a lot of theater in the department for credit and you also work on theses and other people’s productions, so that’s also a great place where you can meet people and be part of other people’s work, which is something really special.

A: Can I have an example of one of these wacky productions?

SS: The first show that I would say was totally crazy that I worked on was called “Auntie Stein’s Smiletime Pizzaburger Palace: A Modern Parable for Troubling Times,” full title [written and directed by Russell Goldman ’17 and Mitchell Stone ’16]. It was a jukebox musical set to Brian Wilson’s “Smile” in which there was a man made out of meat who was sort of like a prophet. I made his meat suit—that was the first big costume I did –with a team of “butchers,” is what we called them, although very little actual meat was used. That was a big turning point for me, and now I’m really into meat suits. In fact, meat boy is still in my closet and I haven’t figured out how to wash him. If this article can help me get some advice on that, I’d really appreciate it!

A: Speaking of theses, can you tell me a little bit about what it’s been like working on yours?

SS: This is what ThesisCrazy is for! I’m making a film thesis set in a home for unwed mothers, and it tells the story of two friends who are trying to preserve both their memories of their pregnancies and their friendship. My grandmother was in a home for unwed mothers in the early ’60s where she gave birth at 18 years old to my mom. My mom was given up for adoption, but we found my grandmother a little over 10 years ago. I heard her story and I was just curious about this weird place that all of these young pregnant people are sent to. I became really invested in what that place is, who goes there, what they spend their time doing there, that sort of thing.

A: Are you thinking that your post-grad plans are going to involve theater or film in some way?

SS: Yeah, definitely. That’s what I want to do.

A: If we don’t find you in the CFA, where else might we find you around campus?

SS: Right now I am so knee deep in trying to finish my two majors—which are both majors that love to have all of your time—and extracurriculars that want you every second that you’re not in class that I can’t think of anything. But I do like to go around off campus to kind of take a break, as a way to remove myself from a lot of the crazy that goes on here. Klekolo is an awesome coffee shop in Middletown where I like to spend time.

A: If you had a piece of advice for freshman year Sofie, what would it be?

SS: It would be to really keep trying new things. I don’t regret being as involved as I was in student theater here, but it really eats your time. I wish I had taken a little more time just to keep pushing to try things I’d never done before.

A: What was your theater involvement like in high school?

SS: Directing high school theater isn’t actually directing, but it was the role I was given. I was very much a rehearsal always, all the time person—that sort of has stayed the same here. But I’ve started doing a lot of costumes here, and I didn’t do any of that in high school.

A: What drew you to costume design?

SS: This incredible theater director who was a senior when I was a freshman named Sivan Battat [’15] came up to me at WesFest and asked me to costume design her thesis, and I thought, “You’re totally crazy. I’m going to be a freshman and I have no idea what theater at Wes is like.” But I did costume design her thesis, and I still have no idea how. But she then decided to put blood in her show two weeks before the show, and all the costumes were white, so I had to scramble to sew 28 costumes with Celina [Bernstein ’18], and that’s how we became really close friends. After doing that, I was always tied to something—I was always costume designing Second Stage shows and more theses in the Theater Department. I think I’m working on my last Theater Department production called “The Good Person,” directed by Rose [Beth Johnson-Brown ’18], who I also met from working with on that first thesis freshman year.

A: So full circle!

SS: Well that’s what’s so beautiful about my experience with theater here. I would have never thought that this person who I begged to sit in a basement with me to sew 28 costumes when I was a lost freshman would become my best friend who has worked on every single project I’ve ever worked on with me, but that’s just the way the theater community works here.