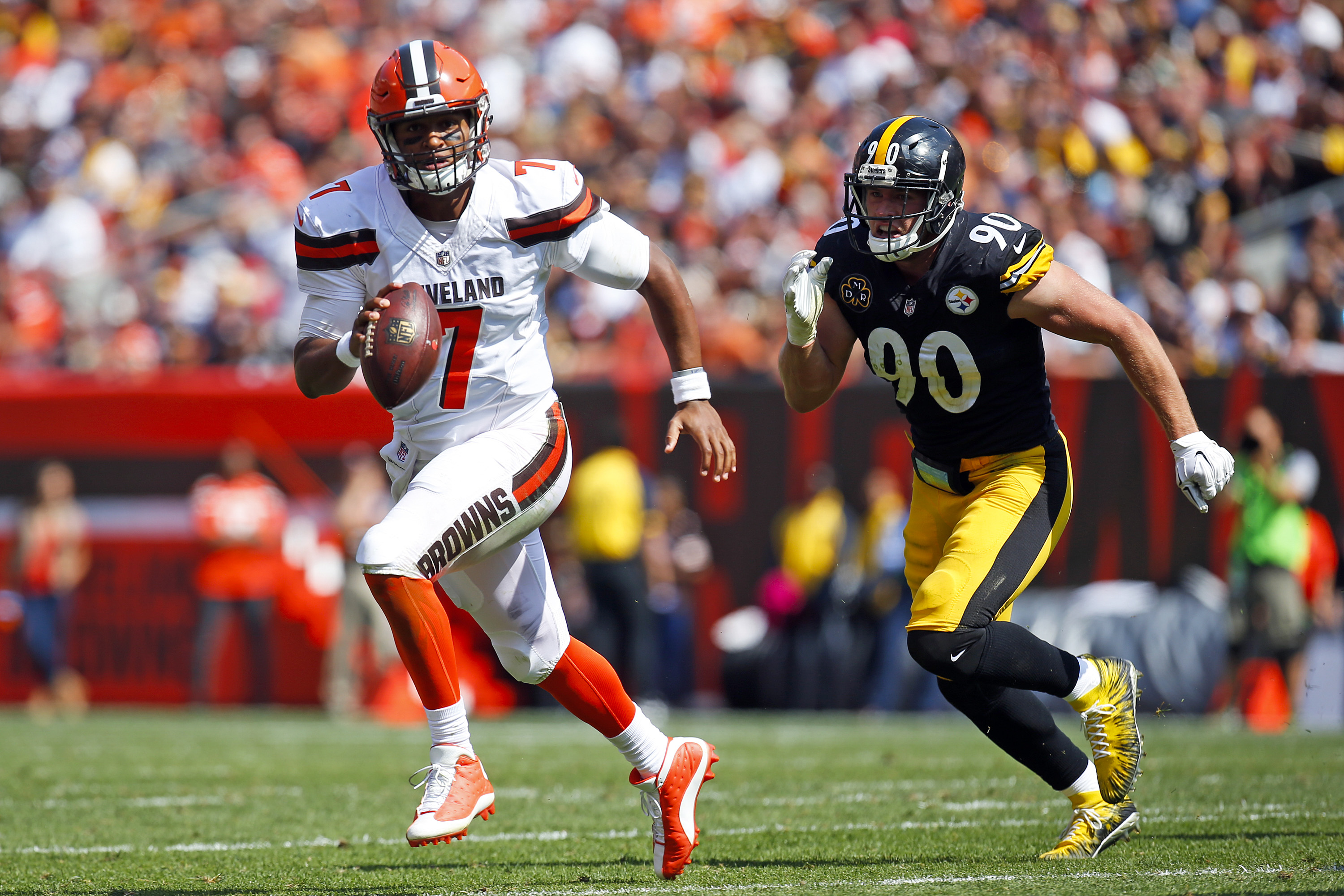 With the first week of NFL games now behind us, here are ten takeaways from the action.

1. The Jaguars defense was dominant. This shouldn’t come as a surprise. Their front office has made the defensive front a priority in recent years by signing Malik Jackson and Calais Campbell via free agency while drafting Myles Jack and Dante Fowler. Against the Texans on Sunday, Jacksonville’s (or should I say Sacksonville’s) defensive unit tallied 10 sacks. If Doug Marrone can get decent play from Blake Bortles at the quarterback position, with this defense, the Jaguars will figure to be a legitimate threat in the AFC South.

2. Andy Dalton was abysmal. The Red Rifle threw four interceptions and coughed up a fumble en route to being blasted 20-0 by the Baltimore Ravens. Cincinnati’s offense is too talented to have their quarterback turn the ball over five times. Scoring zero points when you have A.J. Green, Jeremy Hill, Gio Bernard, Tyler Eifert, etc. is unacceptable. Nothing will change this season, but if Dalton continues to falter, I wouldn’t be shocked to see the Bengals go in another direction come season’s end.

3. It must run in the family. T.J. Watt, the brother of J.J. and a rookie defensive end for the Pittsburgh Steelers, recorded two sacks and an interception in his NFL debut. Like his brother, T.J. fell in the draft despite having a prolific college career and posting eye-popping testing numbers at the NFL Combine. If T.J. can achieve half of what J.J has, his career will be a success. After one game, it looks promising.

4. Exhibit A: Why you pay Matthew Stafford $135 million. The Lion’s signal caller led his squad to a commanding 35-23 victory over the high-powered Arizona Cardinals, throwing for nearly 300 yards and four touchdowns. On a Detroit team where other than Stafford, to be blunt, there isn’t much talent, so what should the Lions have done? Stafford gives them a chance to win every single week. What else can you really ask for?

5. Tony Romo is insightful as a broadcaster. I wasn’t quite sure what to expect from the former Cowboy quarterback in the booth, but similarly to Troy Aikman, Romo is precise, passionate, succinct, and, most importantly, accurate in his analysis. It was his first regular season game, so there is certainly room for growth, but after Sunday, I’m guessing CBS is patting themselves on the back for placing Romo in their lead analyst role.

6. Jared Goff might not be a total bust. Last year, it was tough to watch the Rams and not feel as though they made a mistake in selecting Jared Goff, especially seeing what Carson Wentz, who was picked by the Eagles right after Goff, accomplished in Philadelphia. One game into the 2017 campaign, it appears as though Goff might not be all that terrible after all. He shredded the Colts defense, throwing for over 300 yards en route to a 37-point victory. Yes, the Colts aren’t great, especially without Andrew Luck, but the Rams have to be encouraged with what they saw from Jared Goff on Sunday.

7. If the Packers defense can play like they did on Sunday, expect Green Bay to be playing in the Super Bowl. We all know what Aaron Rodgers and the offense can do, but the Packers defense has been their Achilles heel for years. On Sunday, they out Seahawk’ed the Seahawks, holding Russell Wilson and company to a measly nine points. Many people wonder why Aaron Rodgers only has one Super Bowl to his name. The answer is simple: his defenses have failed him time and time again. After one game, it appears that will not be the case this season. Green Bay’s defense looks stout.

8. Odell Beckham Jr. is the Giant’s offense. Eli Manning is satisfactory, as is Brandon Marshall and company, but OBJ is the straw that stirs the drink. Without him, the Giant’s offense is a lost cause, which was made glaringly evident Sunday night. The Giants better hope their electric wide receiver gets healthy and fast, or else it might be a long season.

10. Tarik Cohen might be Darren Sproles 2.0. Not your prototypical NFL running back, the rookie out of North Carolina A&T stands just 5’6” and weighs 180 pounds. But for Chicago on Sunday, he played much bigger than that. He recorded 66 yards on the ground from just 5 carries while adding another 47 yards receiving. Darren Sproles has made a career out of being an elusive dual-threat coming out of the backfield, and Tarik Cohen appears to be following in his footsteps.

Kelly Hogan can be reached at khogan@wesleyan.edu