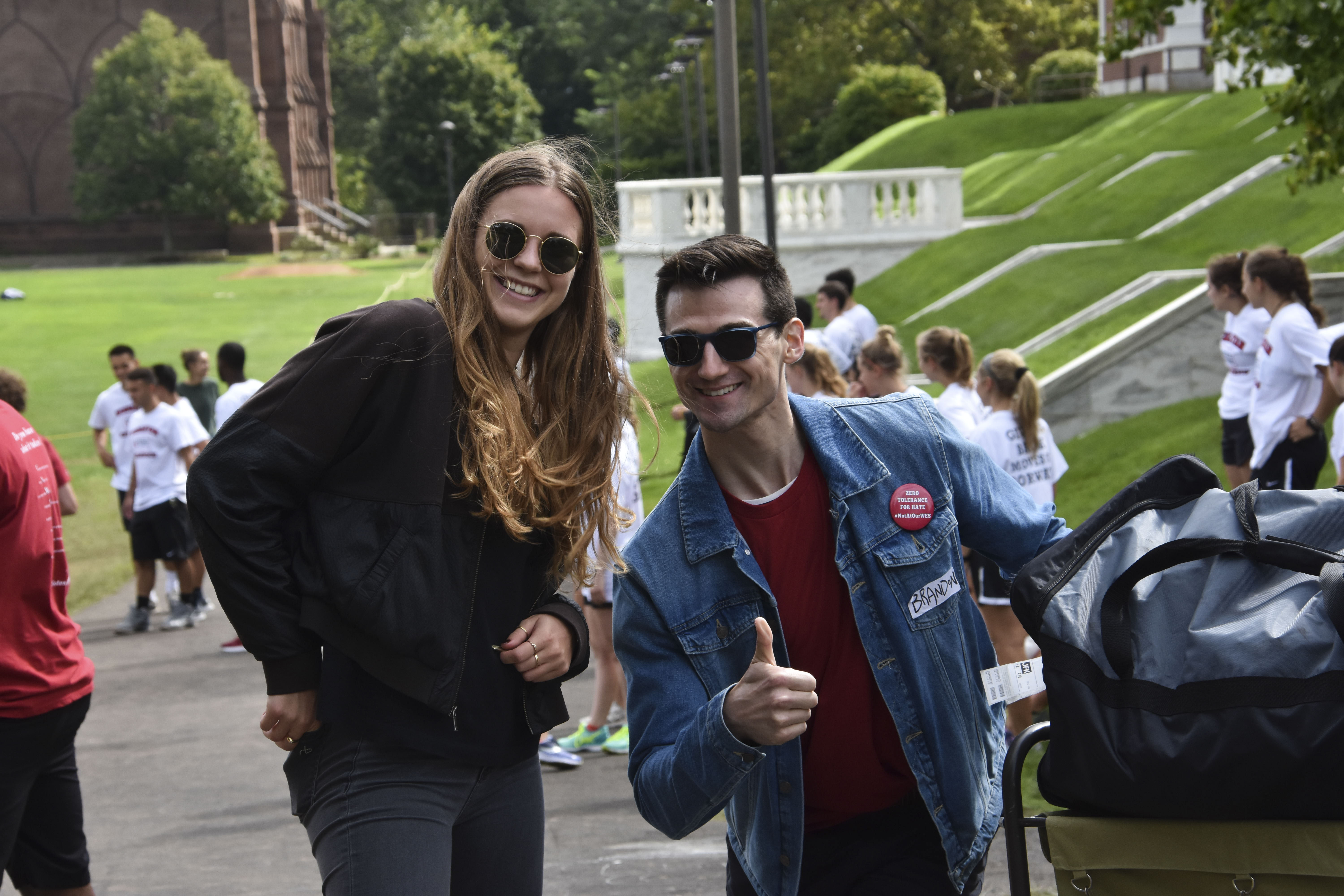 This week, as first-years roam around campus in packs of 20 and proudly refuse to ask anyone but their equally disoriented peers for directions, Wesleyan’s grizzled elders are involuntarily flooded with memories of their first few days on campus. Everyone at Wesleyan seems to remember their orientation experience in vivid detail. The half-week whirlwind leaves many of its victims overwhelmed and exhausted, with countless acquaintances made and considerably fewer names learned. Some thrive, some just survive, and some ditch their orientation activities entirely. Starting on move-in day, The Argus checked in with first-years on their expectations and early impressions of the formative week. Then, we asked members of the class of 2018 about their memories of orientation experiences that still stick out three years down the road.

Marcus Sweeney ’21: “I hope to meet a lot of new and interesting people, and make new friends.”

João Pedro Pereira-Webber ’18: “Something negative is that, and everyone says this, but that orientation is not like any other part of college. Everyone is so eager and overly friendly during orientation. But it was the first time realizing that everything wasn’t mandatory. It took some adjusting to, but that I had freedom. Also, the people streaking across Foss during the ‘fire something something’, I forget the title. I remember that being a moment where I knew that I had arrived to college.”

Dalia Rubinstein ’21: “They’ve definitely given us a good overview of resources available. I wish they gave us more off time to set up and decompress, though. Everything is a little too jam packed right now. I was glad to be here early, though [for International Student Orientation] and move in at my own pace. It was nice for my roommate and I to have our move-in days at our own pace, without the added stress of setting up alongside a new person.”

Gabby King ’21: “I hope I get to meet a lot of new people who’ll turn into some solid friends during orientation.”

Brittany Gilmore ’18: “All I really remember from orientation was how overwhelming it all was, especially trying to remember people’s names. In terms of regrets, I wish I had actually enjoyed myself more instead of being worried the whole time about making best friends on day one since those things take time.”

Nathan Baron-Silvern ’21: “I expect to learn my way around campus, geographically, and get my bearings. I’m excited to get more situated and comfortable.”

Simon Oppenheimer ’21: “One of the things that’s interesting is meeting people with such different backgrounds, it’s already challenging me. Meeting so many people is a bit overwhelming, but it’s better to have too many friends than not enough.”

Mariel Becker ’18: “So, I went to a whole bunch of info meetings for my interests: Wesleyan Women in Science, at the time Rho Ep, and something for Environmental Science majors. Each time I went to those events I kept running into the same senior girl and eventually she came up to me to introduce herself. Little did I know she would end up as being one of the biggest influences on me that year.

“I was at this party with a new friend, someone who I met either that morning or yesterday. She pokes me and she points at the guy across the room and says she thinks he is so attractive—she saw him speak at a poetry event that afternoon. I see him and when I laugh she asks why. I had hooked up with him five years ago at summer camp!”

Alessandro Sassi ’21: “Getting to know people around campus, learning the facilities, and making a home for myself are all orientation goals.”

Julien Loo ’21: “It can be pretty overwhelming, having your first time away from home, but Wesleyan kids are so friendly. That makes it a lot easier.”

Jess Wachtler ’18: “I think it was a generally positive experience. I really remember when we first got into circles to meet our floormates and Chip Kass [’18] did an extremely enthusiastic impersonation of a gorilla. I’ll never forget that.”

Elly Blum ’18: “It kind of sucked. I thought it was boring. They tried to integrate us [as sophomore transfers] with other freshmen and that was fine, but it was hard because there weren’t people your age on campus yet.”

“We had this RA meeting and the RA was like ‘If you drink and you’re under 21 we’re required to take you to the hospital, so don’t drink’ and I walked out of that meeting like…what is this place? Is this really the mentality? Is that how you welcome in freshmen? Overall I did not like it. It was way better when everyone else came.”

Bailey Share-Aizic ’21: “It’s unrealistic to think I’m going to meet my best friends and chart the exact course for my four years here in the span of these days. But I’m hoping to get a lay of the land here, meet exciting people, and start to find the shape of what my year will look like.”

Henry Vansant ’18: “It was a wild time of no sleep, a lot of running, and a lot of meeting my best friends. It was rad!”