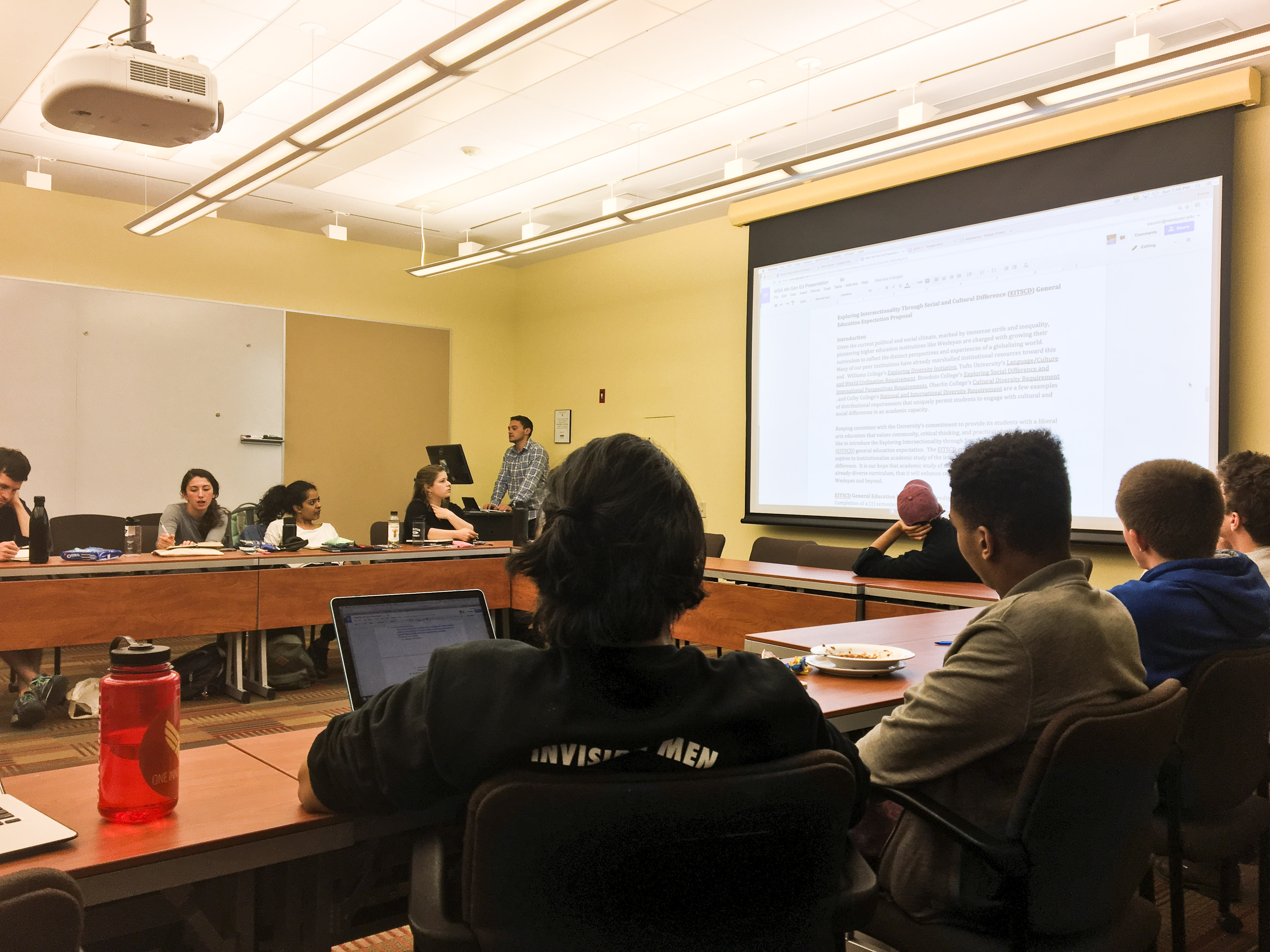 In its weekly meeting, the Wesleyan Student Assembly (WSA) discussed what steps the student body can take to ensure the rights of employees of R.J. Julia’s new campus bookstore, which is slated to open in late spring. The WSA also discussed the proposal of a fourth, social and cultural diversity-focused, general education expectation.

Members of the United Student Labor Action Coalition (USLAC) sat in on the meeting and participated in the discussion of R.J. Julia’s hiring practices and the salary of potential employees. Natalia Siegel ’18 expressed why she thought the employees of Broad Street Books, which is managed by Follett, should be rehired by R.J. Julia as Wesleyan’s bookstore transitions to its new space on Main Street.

“I think R.J. Julia is underestimating how much they need these workers,” said Siegel. “As someone who’s worked in a large student bookstore, [the work is] incredibly specialized and difficult. As [R.J. Julia] has no experience in the world of running a student store, they need these employees who not only have that experience, but know the Wesleyan community intimately. We will not stand for the mistreatment of workers.”

“It was really great that USLAC told the WSA what was happening just to get the record straight,” Kahan said. “Everyone was on the same page. USLAC did a great job communicating what the WSA can do in trying to pressure administrators and talking to them about how workers should have a living wage, which USLAC defined as $15 and over…. I think USLAC is really on top of it.”

Kahan believes the WSA could work with USLAC in pressuring the administration.

“The WSA could speak with administrators, but that’s not to say that other people can’t speak to them as well,” Kahan said. “In addition, we could propose resolutions which is also another form of pressuring the administration…. In addition, WSA members can speak to members of the Board of Trustees. The R.J. Julia enterprise was a board-initiated process, so the Board obviously cares a lot about this and wants it to work, so hopefully they will listen to students.”

The resolutions that the WSA might propose could have both symbolic and actual effects.

“One resolution could be a solidarity statement,” Kahan said. “One thing that some people [also] mentioned is a set of ethics guidelines for subcontractors that Wesleyan hires. So essentially when Wesleyan contracts a company to come on campus, there will be ethics guidelines for hiring practices that these companies have to follow if they are going to be at Wesleyan. I think that could be really beneficial and addresses a lot of the issues that USLAC has been trying to fight for.”

Later in the meeting, Josh Prywes ’17 presented a preliminary report on a proposed fourth general education expectation. Joining the natural sciences and mathematics (NSM), social and behavioral sciences (SBS), and humanities and the arts (HA) requirements, the proposed expectation would expose students to non-Western and marginalized social and cultural experiences.

The report outlined how this expectation—which at some schools is a requirement—manifests at other NESCAC schools. For instance, Williams College’s Exploring Diversity Initiative Requirement asks that students take one course in Comparative Study of Cultures and Societies, Empathetic Understanding, Power and Privilege, or Critical Theorization. These courses can overlap with other requirements. Students can also fulfill this requirement by completing a study abroad program, but then they must complete a project or write a paper describing how their experience fits the requirement.

At Bowdoin College, students must complete one course in both Exploring Social Differences and International Perspectives.

“These courses develop awareness, understanding, and skills of analysis for examining differences such as those in class, environmental resources, ethnicity, gender, race, religion, and sexual orientation across and within societies and the ways that these are reflected in and shaped by historical, cultural, social, political, and economic processes,” Bowdoin’s website reads.

The report also shared the results of a survey the WSA conducted about the potential for a new expectation. Of 167 respondents, approximately 61 percent thought that the University should adopt a fourth GenEd, approximately 17 percent thought that the University should not adopt this expectation, and approximately 22 percent were uncertain. Also, 34 percent of respondents believed the fourth general education expectation should be one course, 30 percent believed it should be more than one course, 19 percent were uncertain, and 17 percent believed it should not exist.

Respondents also predicted the challenges that they expect students will face in completing this expectation.

The report ended with a proposal for the expectation, which Prywes called the Exploring Intersectionality Through Social and Cultural Difference (EITSCD) general education expectation. (WSA members expressed the desire to shorten this name.)

“Completion of a (1) semester-long academic study abroad experience in a non-Western country and an accompanying reflective paper or project or (2) one academic credit in either the Social Difference or Cultural Difference category is sufficient to fulfill the expectation,” the report reads.

The proposal also outlined the rollout of the potential GenEd.

“We propose that department chairs compile a list of eligible courses each spring semester prior to the launch of the subsequent academic year’s course catalog,” the report read. “These courses will have a WesMaps distinction (similar to the HA, SBS, and NSM distinctions that currently exist) and students will be able to petition for courses they believe fulfill the EITSCD general education expectation if these courses are not already designated on WesMaps.”

WSA members proposed creating a new “course cluster” on WesMaps and questioned whether this expectation would prompt professors to create new courses that fulfill it.

President of the WSA Rebecca Hutman ’17 spoke on her support of the proposal.

“It seeks to create a community more cognizant of a lot of distinct experiences, backgrounds, and identities,” Hutman said. “Specifically, it encourages students to learn about a historically marginalized people, culture, nation, or identity…. Also, hopefully this incentivizes classes that are, for example, strictly situated within the Western context to broaden their perspective. Let’s say the a political theory class only looks at political philosophy within the Western context and from the perspective of Western academics. If the course were to meaningfully integrate scholars from outside the Western canon, then the course could itself qualify for the requirement. So the requirement aims to work in three ways: drive more students to these courses, and maybe, in doing so, encourage more institutional support for these courses, and maybe even encourage professors to alter their courses to bring in different perspectives so they might qualify for this course designation.”