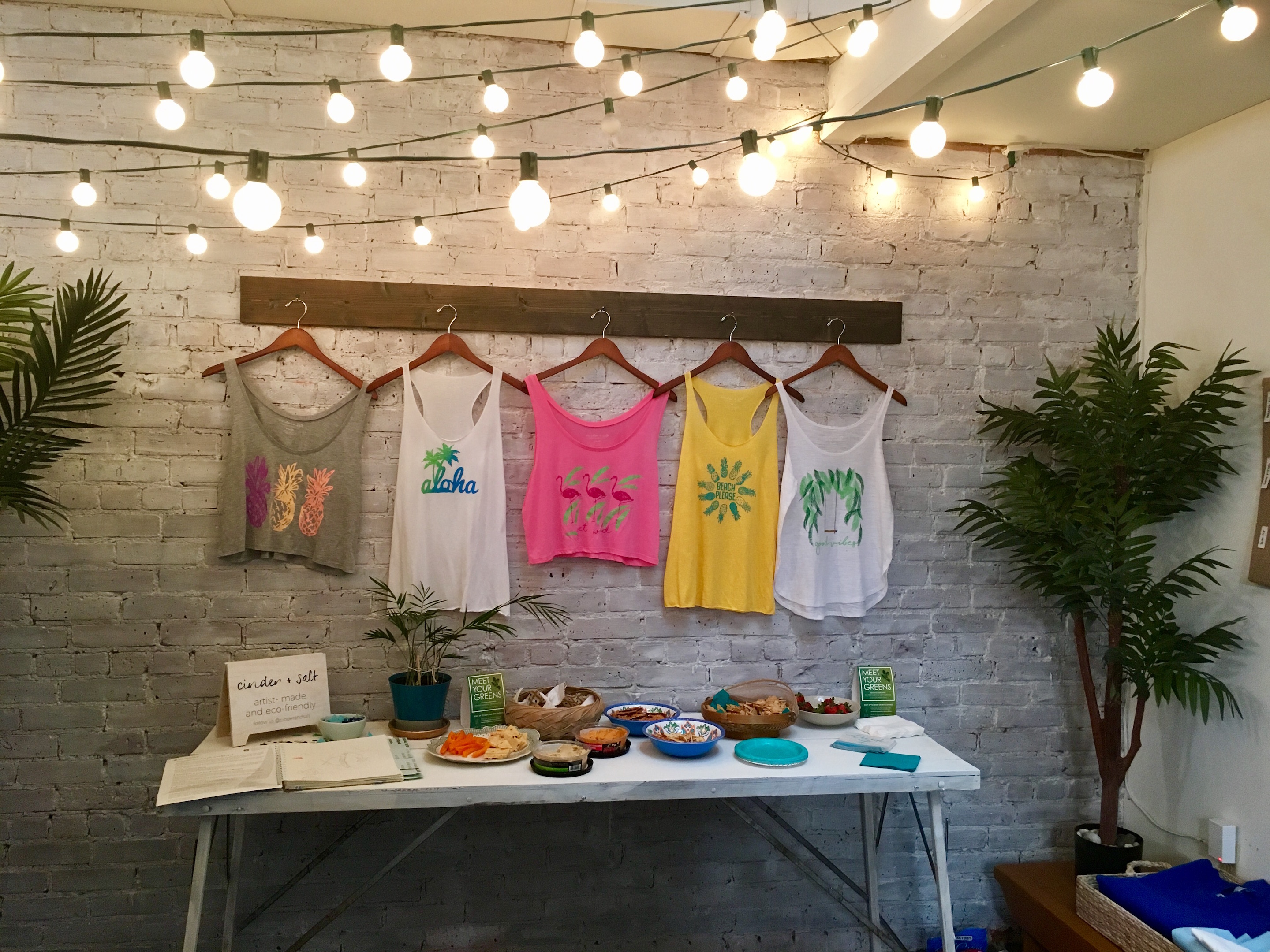 “Green Drinks is an eco-friendly networking event,” explained owner and artistic director of Cinder + Salt Rachel DeCavage. “It’s basically a lot of people who love the planet getting together.”

DeCavage, a self-confessed tree hugger and frequent attendee of Green Drinks events, said she reached out to the Middletown chapter of the organization and offered to host that month’s event in her boutique, which is in itself a work of environmentally aware art. The paper palm fronds that line the walls of her shop are made from recycled magazines covered in green paint. On the back wall is DeCavage’s work-in-progress masterpiece, a map of the world made entirely from recycled bottlecaps of every size and shade, which she compared to over-sized confetti.

“I feel like it’s my mission as an artist to upcycle as much as possible and save the planet with my work,” DeCavage confessed. “All of our shirts are eco-friendly: organic cotton and made in the USA. And then we use all recycled or reclaimed inks, so some of our inks are older than I am, over thirty years old. We sort of design based on what color inks we have. We try to run as low impact as possible here…. Our goal is zero waste.”

While DeCavage’s clothes are made from natural fibers ranging from organic cotton to hemp, they aren’t your typical eco-friendly attire. Her shirts are covered with bright, graphic designs, for example a row of pink flamingos or a bunch of pineapples clustered around the phrase “beach, please.” Her goal is to provide clothes for young people who understand that fashion and environmental consciousness aren’t mutually-exclusive concepts.

DeCavage’s passion is shared by the members of the Rockfall foundation, who helped her host the event, as they do with all Green Drinks events in Middletown.

“We always host the [Green Drinks] that are regional,” Executive Director of the Rockfall Foundation Robin Andreoli explained. “You have to select a city as your main hub, and for us it’s Middletown…. We have done [Green Drinks] for about five or six years now. We actually call them ‘Meet Your Greens’ because they’re not always drinks. We have something coming up that’s a hike, we have one coming up that might be a river cruise, so we do different activities.”

Andreoli mentioned that in addition to hosting Meet Your Greens events, the Rockfall Foundation offers grants for environmental projects in the region as well as awards for environmentalism and eco-leadership. They are also committed to owning and maintaining the historic deKoven House, located at 27 Washington Street in downtown Middletown. The Meet Your Greens event at Cinder + Salt will be followed by a number of events this summer.

The variety of events corresponds with the casual nature of the Green Drinks organization, which provides an avenue for environmentally conscious individuals to mingle and talk about issues pertaining to the environment. There are chapters all over the world, including one in nearly every state in the United States. While they’re geared specifically for individuals interested in the environment, their events generally lack an agenda and are always open to the public. 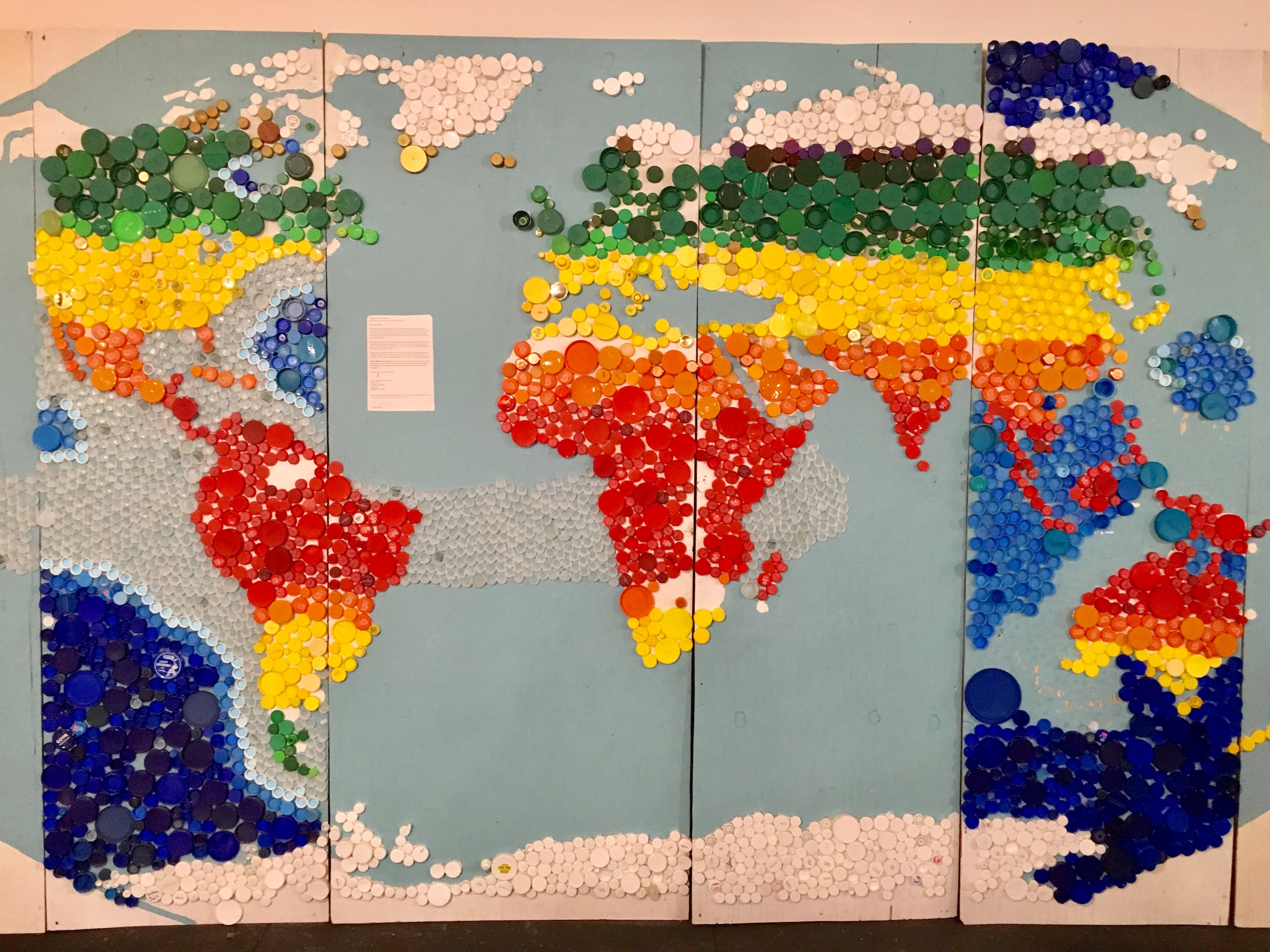 Andreoli noted that she was particularly excited for this event.

“It’s a beautiful day, it’s a wonderful turnout, and we’re lucky to have our state representative here to speak,” she said.

Following a brief statement about the foundation, Rockfall Associate Director Tony Marino introduced Lesser, who spoke in great detail about the multitude of environmental bills being discussed in the State Senate, including a bottle bill that would make it easier to incorporate plastic bottles into single-stream recycling and a bill to protect snapping turtles.

“Our snapping turtles in Connecticut are not subject to any regulation whatsoever regarding the commercial trade,” Lesser explained. “It’s the only species that’s carved out for that, so I have some concern that turtles are being harvested at an unsustainable rate. We’re not really sure who’s buying them…. It’s really hard to know whether the takings are sustainable.”

He also discussed a bill that would offer a bailout to the Millstone Power Plant in Waterford, which claims its profits have dropped substantially, profits that they refuse to disclose. As the plant is a major source of jobs in the Waterford area, the region’s representatives, notably Paul Formica, are fighting hard for a bailout bill.

Lesser also provided an anecdote that led to another proposed bill, pertaining to spraying individuals with “Rolling Coal.”

“I was walking down a street in Newtown last fall with a colleague of mine—two colleagues of mine—who happen to be women of color,” he explained. “We were in a rural area of Newtown, and a truck came by and sprayed us with black smoke. This is a practice called ‘Rolling Coal,’ where you go and you find somebody in a Prius or a Chevy Volt and you spray them with coal, or soot…. It’s a form of harassment, and so we’ve got a bill to outlaw that. I don’t know why we need to expressly outlaw it, but there’s no bill against it, so we’re outlawing it.”

“Don’t do that by the way,” he added. “It’s bad for the environment and dangerous, and it’s bad for human health.”

After answering several questions at the end of his talk and receiving a roomful of applause, Lesser invited everyone to mingle, shop, and enjoy a drink courtesy of Cinder + Salt.