Women’s Lax Upsets No. 13 Bates in OT With Game-Winner From Abby Horst ’19 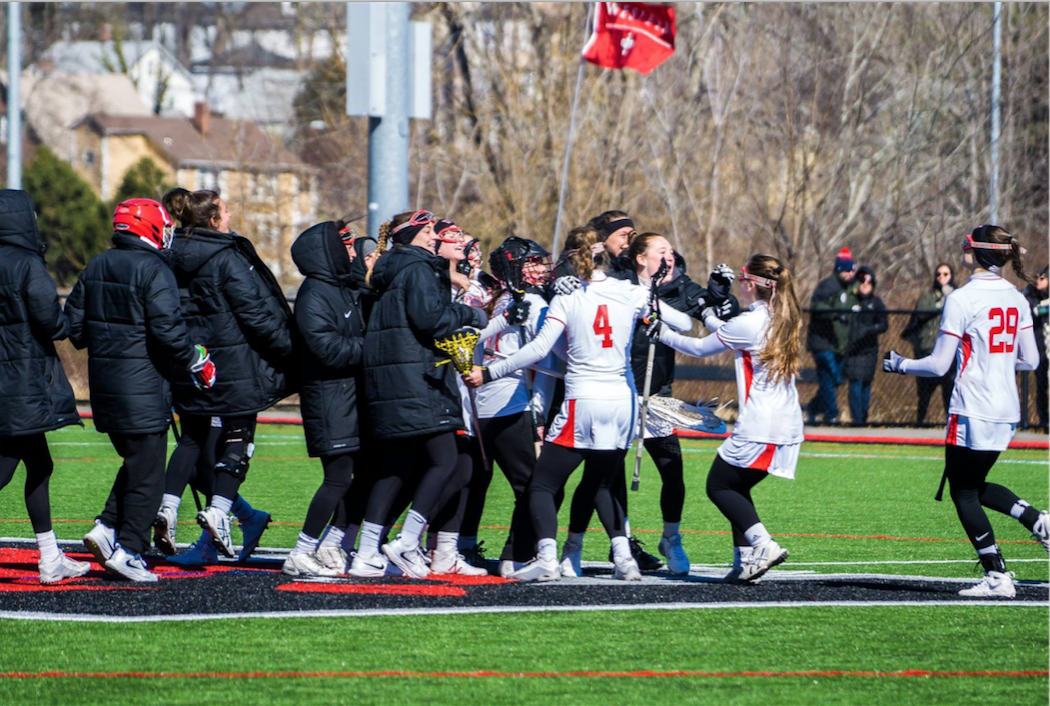 Frigid temperatures, gusting winds, and a nationally ranked opponent were no match for the women’s lacrosse team on Sunday, which defeated the No. 13 ranked Bates Bobcats in overtime on Smith Field. Although the Bates side was more accustomed to the weekend’s arctic weather, the Cardinals’ veterans coupled with an insurgent core of younger talent prevailed, with Abby Horst ’19 scoring the game-winning point.

Two runs of three unanswered goals each kept the Cards in contention while goaltender Grace McCann ’17 held down the fort with 13 saves. The scoring opened with a goal from Rachel Aronow ’17 who, in addition to playing on the women’s ice hockey team, was inducted into Phi Beta Kappa in December for her work in astronomy and mathematics. Aronow’s goal came just under a minute into the game, but the Bobcats eventually responded around five minutes later with a free position goal from Drew Barry.

The Cardinals’ first three-goal run then came with snipes from Abby Manning ’20 and Caitlin Wood ’19, bringing the Red and Black’s lead to 4-1. Bates then pulled to within one before the end of the first half, but another quick three-goal run kept the lead for the home team. Among the scorers in the second burst was Emma Richards ’20, who along with Manning saw the first goal in her college career coincide with her debut. Captain and attack star Liana Mathias ’17 then scored what looked to be an early dagger with a quick goal to end the first half with just under a second remaining, leaving the score at 7-3 in favor of Wesleyan going into the break.

Though Aronow was able to find the twine again in the second half to bring the score to 8-4, the Bobcats had finally warmed up enough to shake off the bus legs and went on a four-goal run, tying the game with 17 seconds remaining.

Although it would have been easier settle for a draw after seeing their four-goal lead vanish, Horst didn’t think twice and fired a rocket past the Bobcat netminder to clinch the win in overtime with a minute left on the clock.

While the Cardinals’ upset over Bates may have come as a surprise to casual women’s lax fans, it certainly wasn’t for the team’s senior leadership. Captains Meghan Kelly ’17, Leah Giacalone ’17, and Mathias took time after their frigid Saturday morning practice to talk about their hopes for the season.

Having seen perhaps the greatest shift in the mentality and scope of the program than any other single class year, the Class of 2017 captains are invigorated with where they see the team going under second-year coach Kim Williams.

“Kim played at C.W. Post and [assistant coach] Rachel Hickey played at Rutgers, and they’re both just absolutely amazing,” Kelly said. “They’re such good athletes, they’re such good role models too. They really care about us and want us to succeed, and they also have such a passion for the sport that makes us all want to be better.”

Mathias underscored the importance of the pedigree that Williams and Hickey bring to the program with the history of their former college teams.

“They both came from really top tier programs, so they know the kind of work that’s required,” she said. “Kim won the national championship her freshman year, and she was in the final four her final two years, so she knows exactly what it takes to be a winning program.”

While just about every varsity athlete at Wesleyan has beaten the odds to have the grades and the athletic prowess to be recruited to a rigorous program at an elite school, the women’s lacrosse seniors in particular were drawn to Middletown for the University’s strong academics coupled with the competition of the NESCAC.

“All of us definitely wanted to play in college, and the NESCAC was such a big draw that the academics coupled with Wesleyan being a really budding program—and especially since Wesleyan is one of the best NESCAC schools—made it a great fit,” Giacalone said.

Aside from Aronow, the team also boasts Meredith Smith ’17 in Phi Beta Kappa, along with several players who study science majors that are typically difficult to couple with a sport. With the academic foundation set, the team is ready to set higher goals for the season.

“Our goal is to win the Little Three and to make the NESCAC tournament,” Kelly said.

“Catch us in the NESCACs,” Matias left as the captains’ parting words.