Wes Grads Get Real About Their Careers in Publishing 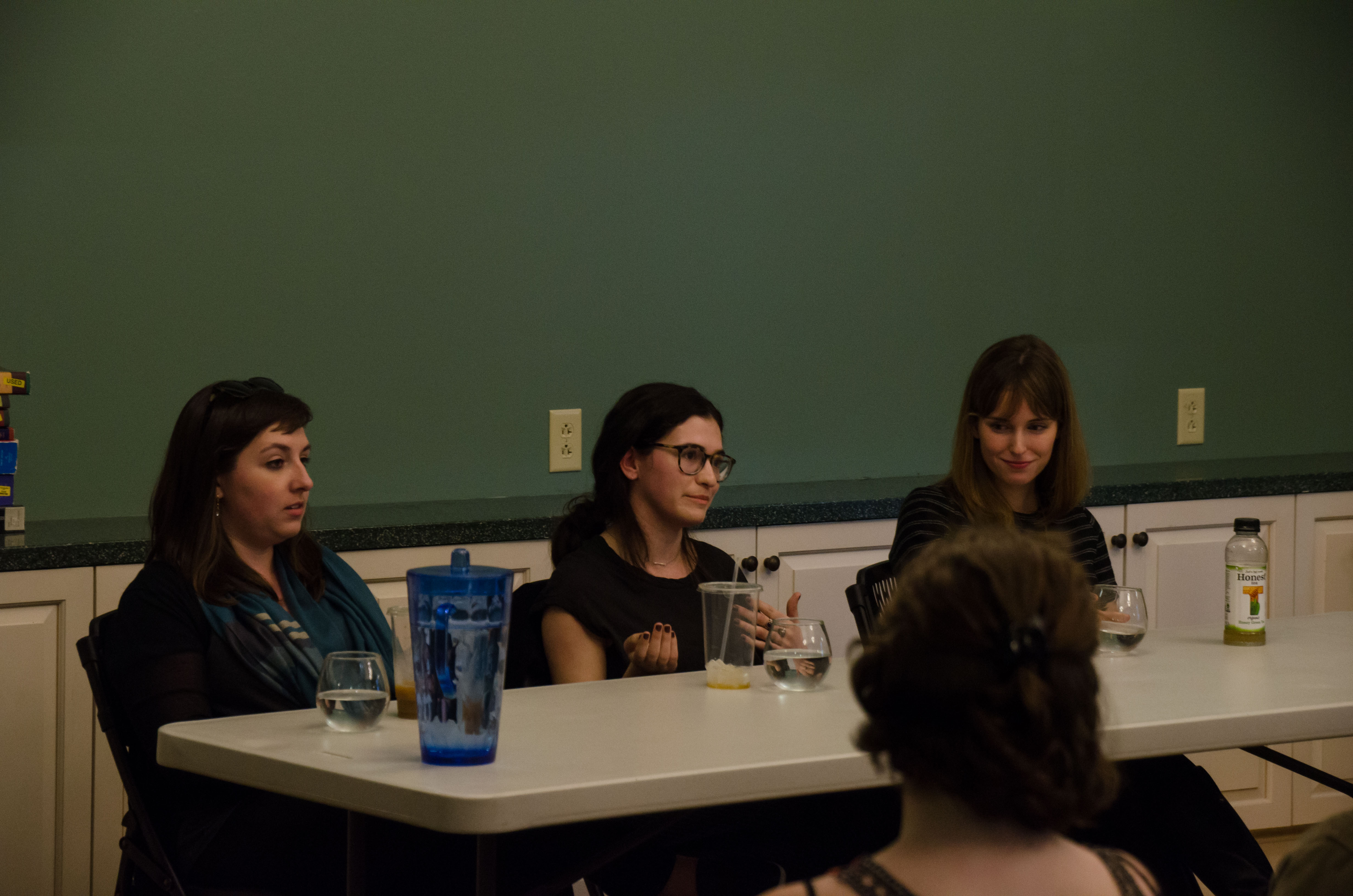 “Devil Wears Prada”-esque bosses and literary critiques of Western novels are only a few of the anecdotes that came out of Downey House Lounge on Friday, Feb. 24. While most of campus lounged on Foss Hill and enjoyed the unusually pleasant weather, the English department hosted a panel on careers in publishing with three University graduates: Caitlin O’Shaughnessy ’08, Danielle Springer ’13, and Anabel Pasarow ’16.

Springer is an editorial and publisher’s assistant at G.P. Putnam’s Sons (an imprint of Penguin Random House), Pasarow is an editorial assistant at the same imprint, and O’Shaughnessy is the current marketing manager at Penguin Press. The alumnae addressed their experiences in the industry without sugarcoating the challenges of their careers, but reiterated how much they enjoy their work.

O’Shaughnessy kicked things off by talking about her first job in the field right out of college.

“I ended up working at InStyle magazine and I was a publicity assistant,” she said. “This was in 2008, when it was pretty much a hiring freeze across the board for all magazines. It was a really hard time to try and get into publishing, especially magazines.”

She also addressed her quick change after only nine months to try and work with books instead.

“I was an English major and I was really frustrated with how every month we would do a new issue and we never looked back at the old ones,” O’Shaughnessy said. “It felt very disposable.”

They covered a wide range of topics, from initial challenges at their lower-level positions—O’Shaughnessy mentioned that at one point she was getting coffee four times a day—to the unexpected perks of the position.

“You’re just surrounded by a lot of like-minded people,” said Springer. “That’s what I really love about my job. I think what I like about editorial, specifically, is having the one-on-one contact with the author and also that thrill of finding a new submission: pulling something out and you get to be the one that goes to your boss and says, ‘This is something I think that you should look at,’ and then you get to see the changes draft to draft.”

After describing their current positions in detail, Springer and Pasarow gave advice to those interested in entering the field, as well as sharing what they hadn’t expected about publishing. They continued to affirm their love for their positions at the organization.

“What I wish I had known about publishing before I started is how much of a business it is,” Springer said. “You’re still working for a major company… and you’re still helping schedule things, you’re still looking at numbers, you’re still doing all the things at any major company. But like I said, you’re working on something that you’re really excited about, hopefully.”

Pasarow discussed one of her bosses who works primarily with celebrity memoirs, and how her work surprises her.

“It’s been not at all what I expected in a lot of ways,” she said. “I didn’t expect to like working on Westerns, because that’s not what I would reach for as a consumer…. I think it’s also a lot more administrative than I had anticipated. I had to learn to become a lot more organized.”

The panelists then answered more questions from the audience, sharing what each of them does on a typical day.

“Every day, I read at least one submission,” Pasarow said. “We’re the first reader, usually, of submissions that come in… It’s cool to be an authority on that. So that’s something I do every day. I do a lot of mailings, mail a lot of books to many people.”

When prompted, the panelists discussed how their time at the University helped them with their careers in publishing.

“For me, it was being a writing tutor,” Springer responded. “I think that people are really attached to their work, and finding ways to help them say what they want to say and doing that in a kind way is really valuable and also you get to have your footprint on something.”

Pasarow added that she had initially contacted O’Shaughnessy when she decided to enter the industry.

O’Shaughnessy compared her time at the University to her current position in marketing.

“When I was here, everyone was always doing something interesting and something very involved and committed to what they were doing and open to new ideas and constantly kind of thinking and creating and publishing is a similar kind of person, who’s interested in collaborating, thinking, and creating,” she said. “Everyone has a weird hobby or something. It’s a group of very interesting, intellectual people. The money’s bad, but the people are great, and Wesleyan was very much a community like that.”

Soon after, she shared her desire to stay in the industry, but to move toward the business side of publishing.

“I really like working in books, and I think there’s a lot of room for people who have analytical skills who still understand the value of good writing and literary talent,” O’Shaughnessy said. “I think we need people who are English majors, who love writing, to figure out how to restructure the industry because content is having a really hard time right now…. I feel like the media industry’s on a precipice in that, yes, we all want to read things, but we all don’t want to pay for things, so we need to figure out a happy medium to kind of keep creating and keep seeing things and I want to be one of those people who stays to fix it instead of one of those people who leaves to do something else.”

She concluded her thoughts in a lighthearted manner.

“But then again, I might have to because it’s a very hard industry to stay in for a long time,” she said.