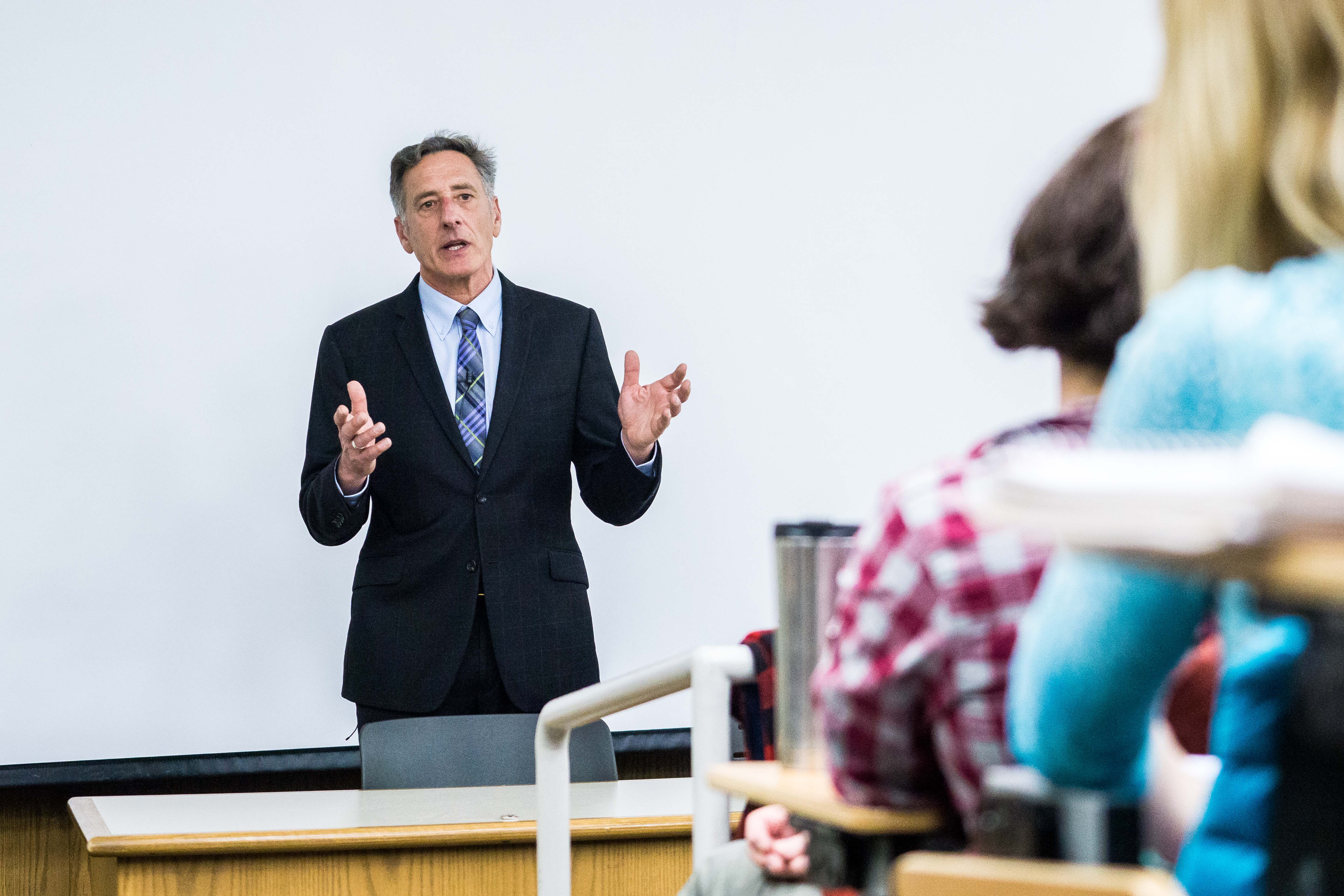 On Thursday night, Feb. 23, students, faculty, and residents from all over Connecticut packed into a lecture hall in the Shanklin Laboratories to attend a talk given by former Vermont Governor Peter Shumlin ’79, which was entitled “Climate Change & Public Policy: Saving the Earth at the State & Local Level.” The event, hosted by the Allbritton Center, focused on Shumlin’s environmental policy and accomplishments during his three terms at the helm of the Green Mountain State.

Concerned with the rapidly declining environmental state of the planet, which he believes to be the most significant problem of our time, Shumlin made climate change policy his first priority when elected. In 2011, Shumlin led a multi-agency initiative to develop Vermont’s first Comprehensive Energy Plan (CEP) since the 1990s, which set a path to convert 90% of Vermont’s total energy to renewable resources by 2050.

“We first changed the economics of solar paneling by passing legislation that reimbursed anyone who had excess solar to put back into the grid at a higher rate than you pay the utilities for power,” Shumlin explained of his plan’s implementation. “I needed to make it economically viable. Second, we changed the regulations so that we could build big wind, meaning wind turbines, in the right places in Vermont…. Third, I said, ‘We gotta change the model for our utilities so they become [energy efficient] companies instead of companies like most utilities…that try to buy as much juice as they can out there somewhere, fit it in poles and wires, and sell as much of it as they can.’”

“We’ll offer to come into your home…and provide all the services,” Shumlin said. “We’ll rip out the doors and windows and replace them with energy efficient materials. We’re gonna build your house so tight with cellulose and other insulation that you’ll have to open up your window in the winter time. We’re gonna rip out the oil burner in your basement, replace it with solar on your roof, in your yard, or at a community CSA. You will be totally fossil-fuel free for the same money that you were paying to put oil in the tank, run the electric hot water heater in the basement, and watch most of your energy go out your windows and doors.” 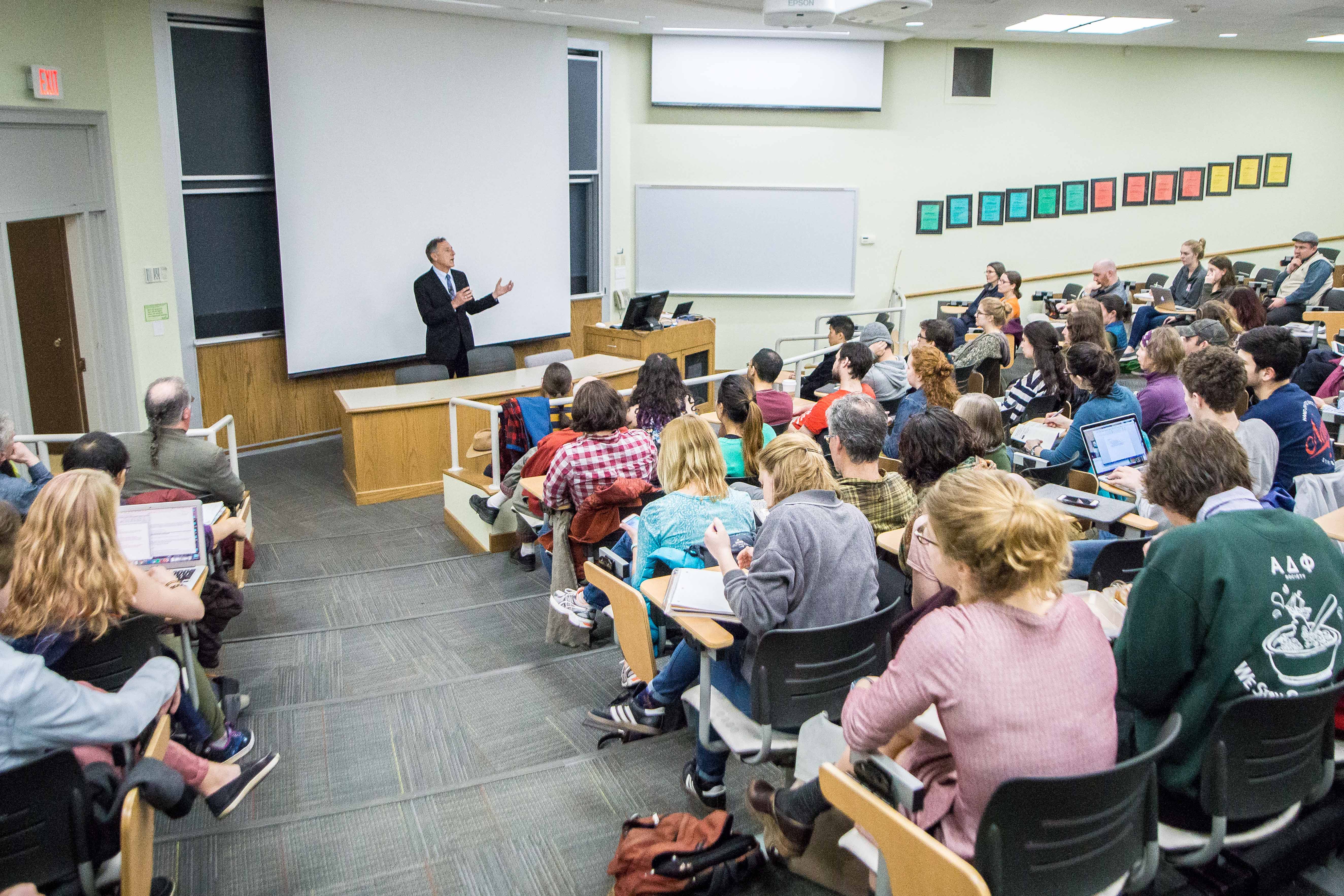 As a result of the changes, 16,000 new jobs were created in the energy industry and Vermont became the number one solar state in the U.S, a statistic that makes Shumlin extremely pleased to be from Vermont.

“We have hundreds of young farmers who are coming up, you know ask the Vermonters here, they’re making cheese, they’re making beer, they’re making caramel from goats milk, they’re making the best veggies,” Shumlin said, beaming like a proud father. “You know the French are so pissed that we keep winning the French cheese awards—this is no joke—that they’re suing us. We can’t say the words camembert, brie, they’re sore losers…. We said no corporate food, no fossil fuels, and it’s working for our economy. Vouch for us, Vermonters,” Shumlin asked as a couple of audience members laughed and shrugged, and replied, “It’s true.”

As Shumlin claims, this kind of environmental prosperity is possible everywhere if the government provides subsidies to companies willing to provide eco-friendly power.

“As soon as it becomes economically viable, everybody’s in,” Shumlin said. “There’s no reason why it can’t happen in Connecticut, Massachusetts, Texas, or Florida…. We subsidize coal, we subsidize oil, we subsidize nuclear, and then when we have teeny little subsidies for renewables, all the people in Washington say ‘Wow, we’re subsidizing this and it’s costing us a fortune’…. We’re spending billions of dollars to make sure that the current Secretary of State gets profits at Exxon Mobil…. Don’t whine about subsidies until you stop subsidizing the people who are destroying the planet.”

When asked how one deals with those kind of individuals who whine about subsidies or deny the impact of climate change, Shumlin had a simple response.

“We just don’t have time to argue if it’s real or not…,” he said. “In the next five or six years, we have a dismal future if we don’t change things… We don’t have time. Time is up.”

Shumlin concluded his lecture with a call to action.

“You all gotta get mad…. If we push for change, we’ll get it. This is a movement that can’t be stopped.”