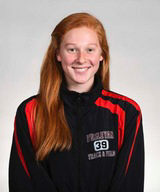 From Friday, Feb. 24 to Saturday, Feb. 25, three Wesleyan athletes competed at the Open New England Championships at the Reggie Lewis Center in Boston, Mass. Cardinal results were less impressive due to the increased talent in the field. Jenny Aguiar ’19 placed eighth in the finals of the 400-meter dash with a time of 59.07, after running 57.79 in the preliminary heat. Andrew McCracken ’19 received a mark of 4.40m in the pole vault, and Claudia Schatz ’19 took 11th in the 1000m run with a time of 3:02.71. The Argus talked to Schatz about the meet.

The Argus: Since there were only three Wesleyan athletes competing in the Championships, did all of the coaches come as well?

Claudia Schatz: Yes, our coaches came. [Aguiar] and I road-tripped up to Boston with the head sprints coach, Coach [Walter] Curry, and the head distance coach, Coach [John] Crooke. Having such a small group of athletes means we get to talk one-on-one before and after the races, and it increases the intensity of the day overall because there’s more attention on us.

A: How did you feel your races turned out?

CS: I’m happy with my race and with the season. I ran a new PR, 3:02.71, which was my goal, and made some good moves toward the end of the race to pass other girls. It’s really satisfying to see steady improvement over the course of the season, and to end on a good note like that. I am learning new things about racing every week, which makes it easy to look back over the race and wish I’d changed things, but I’m trying to take positivity away from each race. Reflecting on the race helps me see things I can do better in the future.

A: What did you do well this season, both as an athlete and as a teammate?

CS: I did a good job of keeping positivity up and trying to spread that to my teammates. I had a rough year on the track last year and didn’t perform my best. It took a lot of courage to come back from that and face the possibility that I would fail again, and be so determined to improve. I’m just glad my races went a lot better this year.

A: What were things you wish you had done in those two respects?

CS: I wish I had set big goals from the beginning of the season and encouraged my teammates to do the same. When you acknowledge the possibility itself, you’re more likely to get there. Sometimes you don’t even realize that you’ve set a mental block on yourself, like ‘I can’t beat her’ or ‘I can’t run that time’ when maybe you could if you just didn’t tell yourself you couldn’t.

A: What are your goals for the outdoor season? Do you expect it will be very different or mostly the same?

A: At the meet, did you see anyone you had known before Wesleyan?

CS: I did see people I knew from high school and even middle school! I had three other friends running there, which was cool.

A: Did the meet feel like the climax of the season, just like another meet, or something else entirely?

CS:  It was definitely the climax of my season. It was one of the biggest meets, as well as a meet that had difficult qualifying standards. I also struggle off and on with shin splints, and leading up to this meet I felt them getting noticeably worse; that’s a sign that rest is needed. I knew I wanted to kill this race and then take a breather so that I could ramp up even harder for outdoor. So I knew going into it that this was my last indoor meet this year.

A: Do you do anything in particular to prepare for meets?

CS: All of our training is in preparation for meets. I do a lot of extra stretching, try to soothe my shins with therapeutic exercises and ice baths, and make sure to eat well the night before and morning of the race. You have to gather yourself mentally, too. The most important part can be positivity and determination, no matter if your muscles feel a little tight or you didn’t have the best breakfast. In the end, you have to ignore the little mistakes you made in preparation, because there will never be perfect circumstances and you have to run well anyway.

A: Any final comments on the Wes track and field team?

CS: I love our team! We are headed for a strong outdoor season and are ready to make the most of our graduating seniors while we have them.