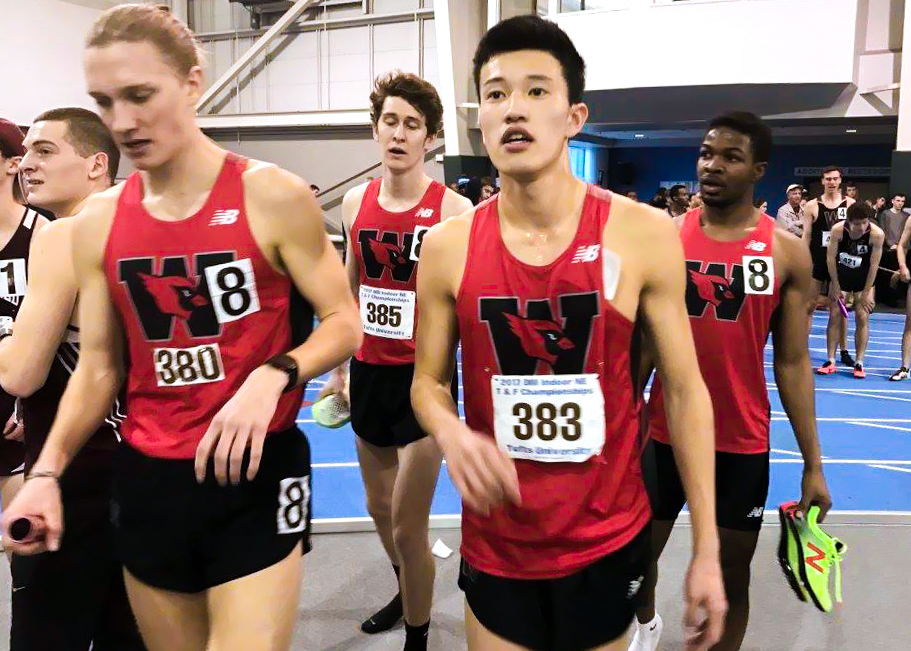 The Cardinals competed at the New England Division III Indoor Track and Field Championship on Friday, Feb. 17 and Saturday, Feb. 18, where the women’s team came in 15th out of 29 teams and the men’s team came in 3rd out of 26. The meet was held at the Massachusetts Institute of Technology, the same location that played host to the Gordon Kelly Invitational one week before.

This meet, the focus was more on individual performances, making the stakes comparable to those of a mid-season meet. The Argus approached Tate Knight ’18, who ran the 1600-meter section of the distance medley relay, to find out how the team felt about the meet.

“The increased ferocity is mostly confined between the teams that stand a chance at winning,” said Knight.

Conner Sexton ’20 finished in ninth place in the 3000m run with a time of 8:42.03. Reid Hawkins ’17 completed the same race in 9:06.20. Sexton has emerged as a consistently competitive runner in the 3000m run after his performance at the Tufts Invitational put him among the top first-year runners in the United States.

The Cardinal men had their greatest success in the distance medley, which was composed of Shota Nakamura ’19, McField, Van Inwegen, and Knight. They finished sixth in the meet with a time of 10:30.79. This time proved fast enough to beat NESCAC rivals Amherst, Bates, and Conn College, but the squad was overtaken by Middlebury, Williams, Bowdoin, and Tufts.

“We ran our first [distance medley relay] in like three years,” Knight said. “Definitely a nice change of pace to compete with teammates instead of against them. We put a strong group together: Shota [Nakamura] opened with a tactical 1200m to put us in prime-o position, Frank [McField] hammered through a 400m and devastated some Williams and Amherst chumps, Grant [Van Inwegen] doubled back from an earlier 1000m and flowed through the 800m like a riptide, and I ran an adequate 1600m.”

Andrew McCracken ’19 snagged seventh place in the pole vault by clearing 4.55m, while Jessy Carrasco-Gonzalez ’18 took 14th in the same event by surpassing a mark of 3.95m.

Knight claims he enjoyed the meet overall, particularly the change of pace from normal competitions.

“It’s nice to have a more intimate subset of the team for the day, because we’re more aware of how everyone is doing and there are more Ritz cracker packs for everyone to snack on for the ride back,” Knight said.

It is notable that the majority of the top finishes on the day came from underclassmen, which means the team should expect some growth over the following two to three years.

For the women’s team, the jumpers made the most noticeable impression.

Casey Rothschild ’20 finished 10th in the triple jump with a flight of 10.78m. On top of that, Katie Maehl ’19 mustered 1.56m in the high jump, a feat that earned her 13th place in the meet overall. Tara Peng ’20 finished a tiny bit below Maehl’s mark, taking 17th place.

Feb. 24-25, the athletes who qualify for the Open New England Regional Championships will compete at Boston University. Soon after that, the outdoor track and field season will commence.