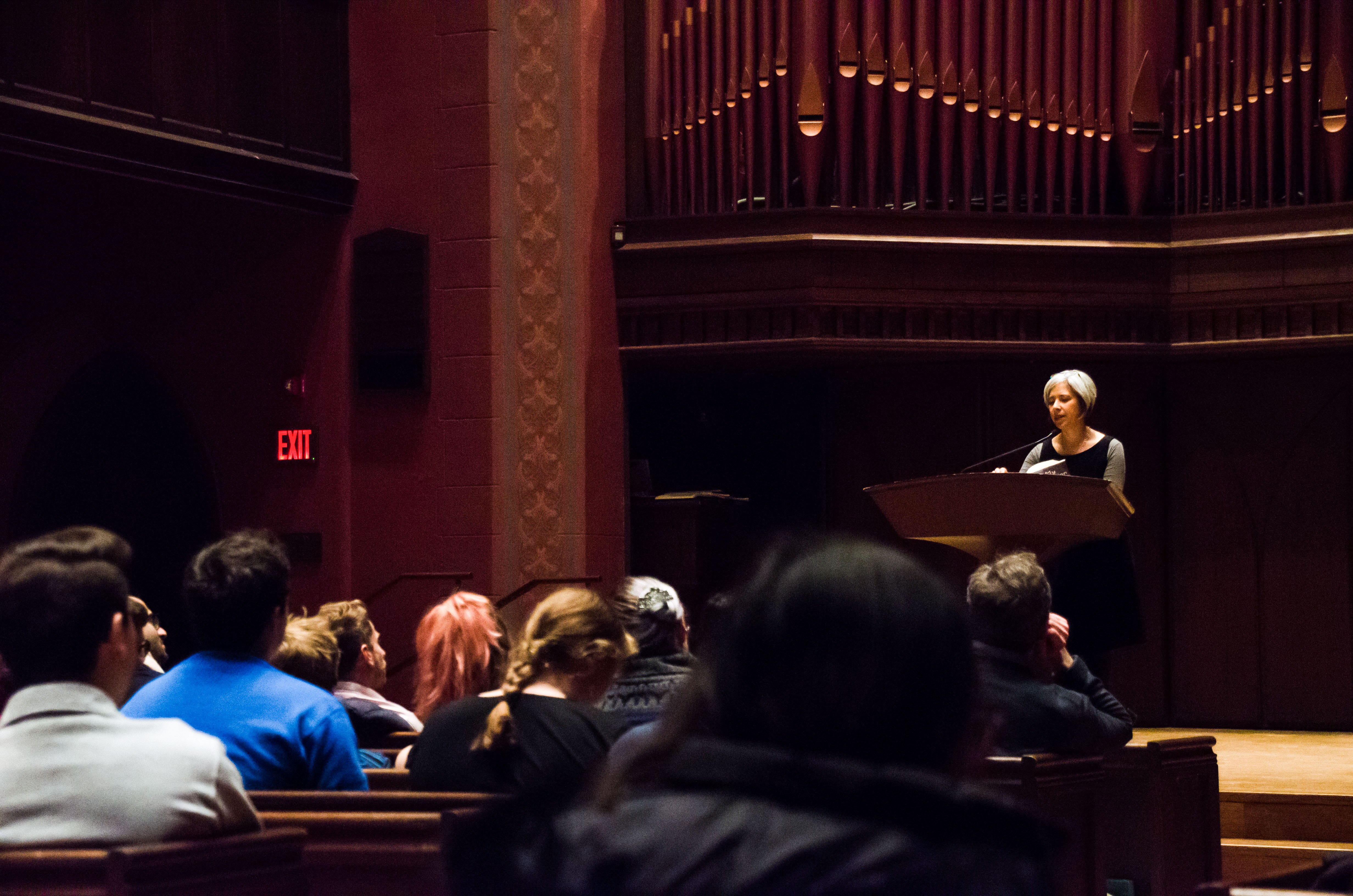 Wednesday evening, Millet Fellow Susan Choi read from her novel “My Education,” bringing an altogether different campus into the minds of the audience at the Memorial Chapel. Published in 2013, the book chronicles the life of graduate student Regina Gottlieb, who unexpectedly finds herself entangled in more than one web of forbidden romances when she begins her graduate studies at an unnamed East Coast university. Drawing from personal experiences shaped by time spent on numerous college campuses, Choi creates characters informed and developed by their relationships with each other and their mutual meditations on love and life. By way of attentively incorporating descriptive language and scenes, she contrives parallel coming of age stories that show how we continue to grow as people well into adulthood.

Choi began the reading by offering audiences a short synopsis of the book. “I’m reading a campus novel on a campus, and I apologize for that,” she said with a laugh. More specifically, however, “My Education” is a story of mistake, one that somehow rejects the idea that a scene centered on grading papers cannot be exciting, because in Regina’s world, it is.

Not long after she arrives on campus, she becomes a TA for Professor Brodeur, a figure known for getting too close with his students, namely, young undergraduate women. Though Brodeur teaches an English class on Chaucer, a subject Regina knows nothing about, she fakes her knowledge like the best of them, and is intrigued by Brodeur’s image more than anything. For Regina, warnings about the professor’s questionable sexual history strike her as a sort of challenge. She finds herself pining for him, curious to enter what is bound to be a territory of prohibited love. Along the way, however, are obstacles and surprises that challenge what even Regina does not yet know about herself in terms of desires for intimacy and a greater quest for personal growth.

Choi read two scenes from “My Education,” the first of which took place in the early sections of the novel. Regina is over at Professor Brodeur’s house for the first time, getting ready to grade papers. She brings her friend Lawrence and the three of them sit around the kitchen with the familiar awkwardness of first encounters in new spaces. Brodeur offers them coffee and the three exchange small talk while Regina’s mind runs rampant with daydreams. She wonders if they are alone or if someone else is home, just asleep. She takes note of how large the house is, how many exits exist, how someone could have easily snuck in while they had been sipping coffee and not crossed their path.

Regina’s character, at 21, appears to be naïve and shortsighted in her initial pursuits of Brodeur. From the two passages read, we do not get any rationale as to what about the professor initially piques her interests; it just seems like a youthful desire built upon, and further tempted by, how forbidden it is.

Later that evening, Regina stumbles upon Brodeur’s wife, Martha, and the two exchange pleasantries followed by intimate banter, far too intimate for any first encounter. Guided only by the Choi’s words, read in an earnest voice, one can experience prolonged eye contact just by way of auditory perception. Choi reads the dialogue with the character nuances of a trained actor, distinguishing the two women with subtle changes in intonation of voice. The immediate spark between them is palpable, and promptly adds another layer of complexity to Regina’s whirlwind of interpersonal relationships.

The second scene that Choi read from occurs at a much later point in the book. It’s unclear how much time has passed since Brodeur, Lawrence, and Regina had first graded those papers together, but even without the intermediary information, there is weariness in dialogue that delineates a marked passage of time. Lawrence, presumably, now has a child, and Regina is bringing Martha’s child over so the two can play. The relationship between Regina and Lawrence has frayed, ever since she became romantically involved with both the professor and his wife. Lawrence, who has remained at the center of the conflict, feels uneasy around his former friend. The tension, again, manifests in meticulously staged small talk that captures vulnerability felt by both characters.

As Associate Professor of English Lisa Cohen mentioned in her introduction of Choi that evening, her stories draw light on the “vulnerable skin of characters, which touch and do not touch.” In both scenes that Choi selected to read, the tension of wanting to be close to someone and retreating was a consistent theme. She expertly captures the second-guessing we take part in, when discussing feelings, struggle, and intimacy—when we touch and do not touch.

Choi, who was born in South Bend, Ind., grew up spending a lot of time at schools. As a child of educators, a longtime English student, and now a professor at Yale University, she has long been privy to the worlds that lay within college campuses, and has long drawn inspiration from the lives that surround her. 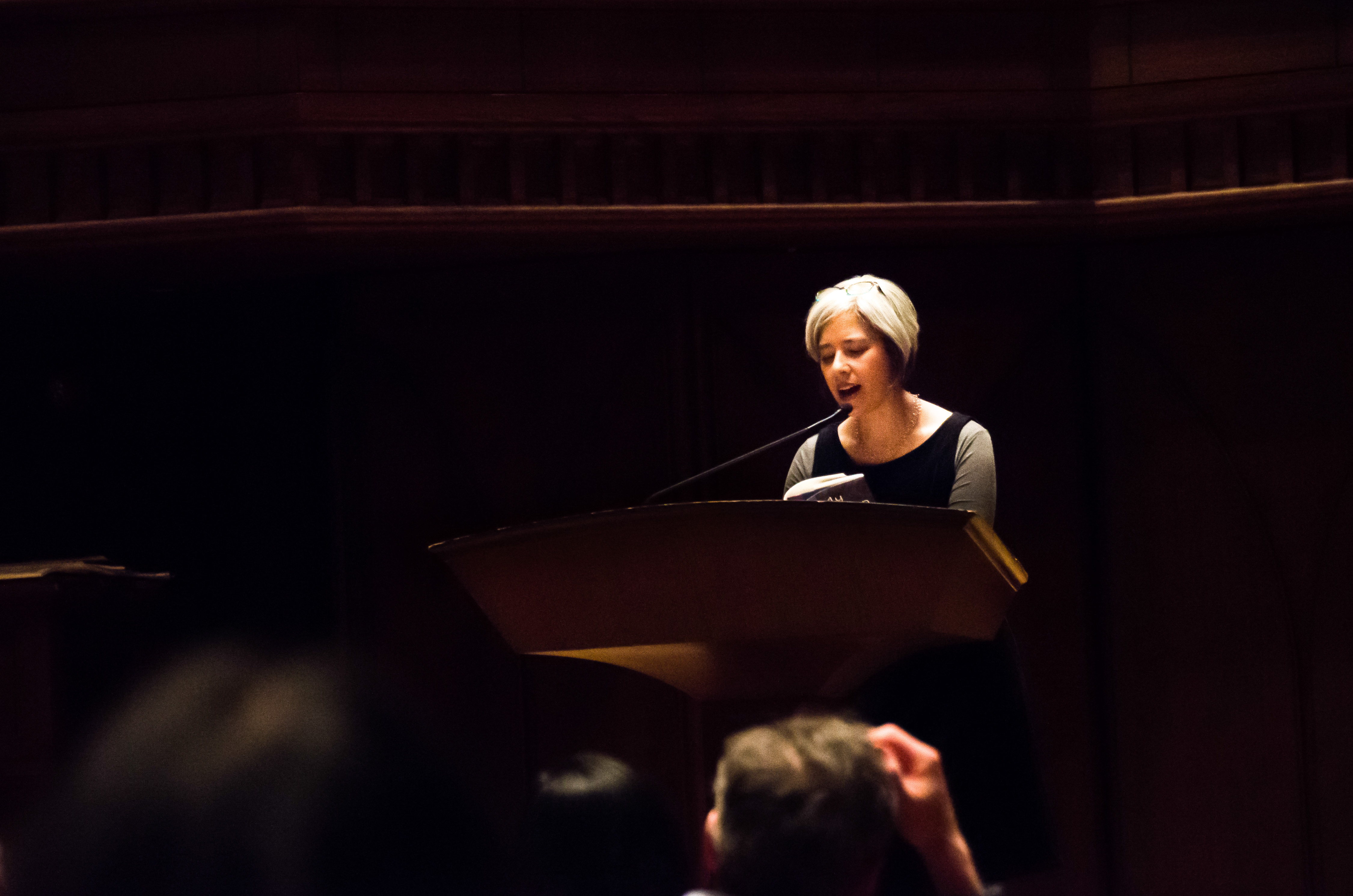 “There is a lot of lived experience in this book, but it’s not point for point as you would think. It’s not autobiographical, but instead draws on experiences not always in the most immediate way,” said Choi.

When asked what initially drew her to writing during the reading’s Q&A session, Choi gave an answer that many writers share.

“I was interested in writing before I had a subject. My love of language first propelled me into writing, and then I realized that writing shapes my understanding of life, in that I didn’t understand anything until I wrote about it.”

Choi’s first novel, “The Foreign Student,” won the Asian-American Literary Award for fiction. Her second novel, “American Woman,” was a finalist for the 2004 Pulitzer Prize and “A Person of Interest,” her third book, was a finalist for the 2009 PEN/Faulkner Award. In 2010, she was named the inaugural recipient of the PEN/W.G. Sebald Award and is a recipient of fellowships from the National Endowment for the Arts, the Guggenheim Foundation, and the University’s Millet Writing Fellow program.

The Millet Fellow program, which was created to bring a distinguished writer to campus each year, has been awarded to, among others, Tracy K. Smith, Hilton Als, and John Ashbury.