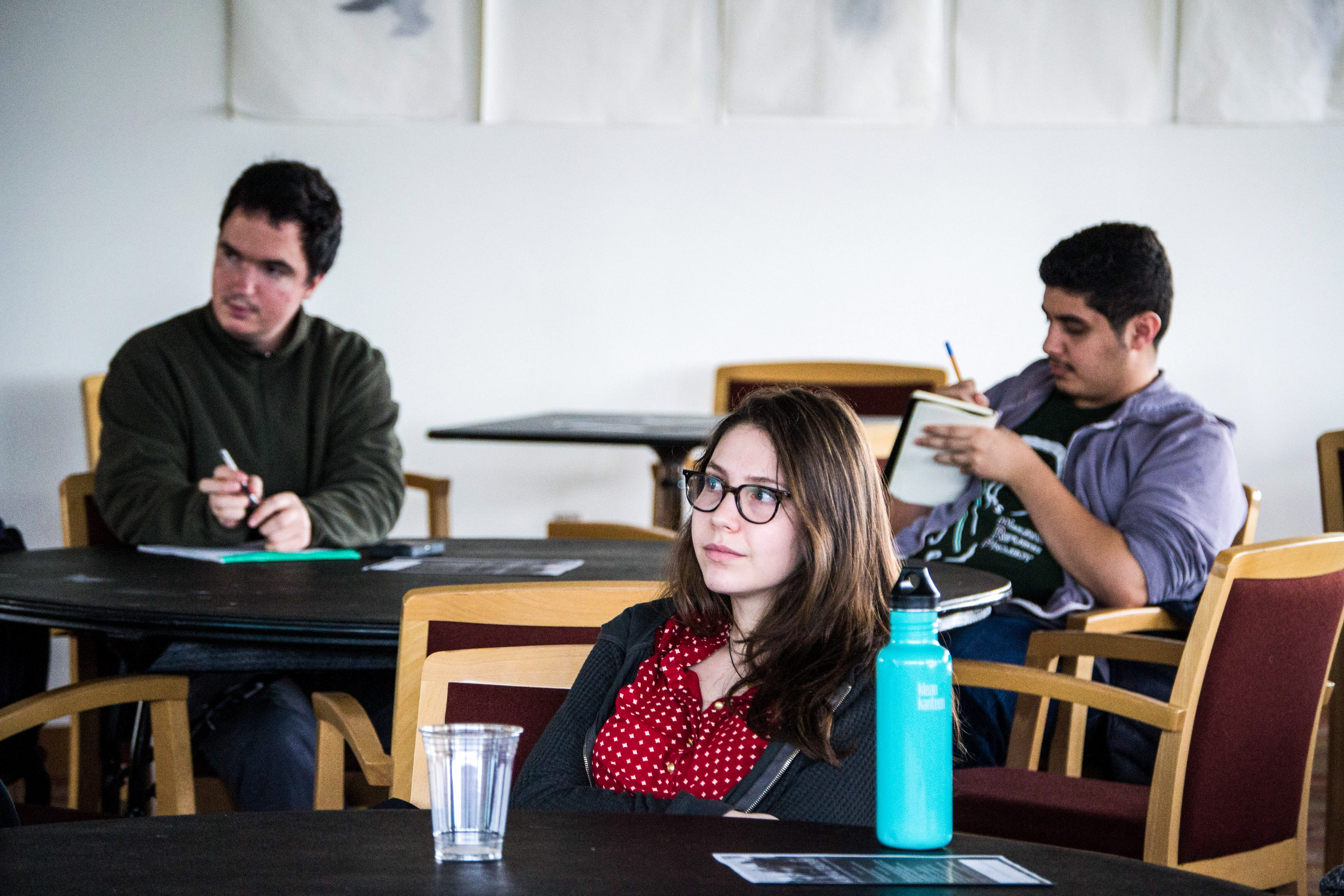 On Wednesday, Feb. 8, the Kharij Collective and The University of Pennsylvania’s Center for the Study of Race and Equity in Education held a National Teach-In on the Presidential Executive Order Banning Muslims, Immigrants, and Refugees. Hosted at Wesleyan University by Pangea, the Teach-In featured lawyers, activists, and academics who have experience dealing with political and legal issues that affect Muslim and immigrant communities.

Immigration lawyers were available to meet with students or faculty after the event. Stanford University graduate student Nisrin Elamin shared her own experience with being detained in the chaos that followed the White House’s announcement on January 27.

“I was coming back from Sudan about 11 days ago, where I was doing dissertation research,” said Elamin. “…For me, this was supposed to be the year my partner and I were going to bring my elderly parents to live here with us in the U.S. I’m not sure that’s going to be possible anymore, and there are thousands on M1 visas across the country who are likely in a similar position who won’t likely be able to see their families for a long time if this order is invoked.”

Elamin took issue with the arbitrary nature of the officer’s decision-making and the criminal background check she was forced to undergo. These two factors were critical to determining whether Elamin would be released.

“The language of the order are in some parts quite vague,” Elamin said. “They are up to individual officers who have their own biases and prejudices. In terms of the criminal background check being a determining factor, as a black person living in America I know for instance that resisting unlawful arrests can be classified as a criminal offense. In my head I was thinking, this could go badly for so many people I know and care about.”

Assistant Professor of Learning Science at Northwestern University Shirin Vossoughi weighted the delicacies of speaking with students in class about the President’s Executive Order. She wanted to combat assumptions that children are not aware of the political climate, and asked teachers to observe how youth are interacting with and taking care of each other. However, when finding ways to critically engage with students, she argued that teachers should not put minorities in uncomfortable positions.

“Individuals from Muslim and Southeast Asia, and North African background, as well as students of color more broadly have consistently expressed concern about being spotlighted in classrooms or being expected to participate on behalf of their communities,” said Vossoughi. “We know that that’s not only an unfair responsibility but also a form of tokenizing….”

The graduate student also noted that the People’s Education Movement is one organization that provides resources for educators to combat racial violence and harassment in the classroom.

Elamin also spoke about the media aspect of the issues that the executive order has brought to light. She spoke about how many of the stories that dominate the news focus on white collar workers like PhD students, doctors, and researchers.

“We have to resist that kind of exceptional citizen narrative,” Elamin said. “The janitors and construction workers on our campus make equally valuable contributions to our communities. The effects these orders will have on them are equally devastating and equally unjust…. We have a responsibility to create more inclusive narratives when we speak to the media and our students….”

In a similar vein as Elamin’s talk about more inclusive narratives, Carolina Ramirez from United We Dream spoke about the importance of pushing intersectionality when organizing to fight back against the executive order.

“…What I mean by that is that two days before the Muslim ban, there was an executive order essentially targeting undocumented folks in this country,” Ramirez said. “I remember sitting around with some of our organizers in the network and there was a conversation about the impact that it would have on the undocumented communities…. These executive communities are impacting people of color, Muslim communities, LGBTQ, and we are all one. As we are exploring organizing, we want to make sure that we think about that.”

Arshad Ali from George Washington University focused the discussion on how universities can make a difference for students affected by the executive order.

“Statements without commitments are hollow,” said Ali. “Universities need to engage in real commitments to support student life. Whether that’s mental health services, academic services, campus activities, whether it’s resources for student groups, whether it’s legal services, particularly for students who are suffering in the context of this executive order.”

Vossoughi ended the teach-in discussion by emphasizing the importance of listening to youth and their responses to the efforts of universities.

“We can learn from the way that you all, as young people, are already resisting these policies and the underlying ideologies that they are rooted in,” Vossoughi said. “I think young people are especially good at using things like music, art, media, and humor to nurture community well-being and responding to these moments. I think adults can learn from these strategies, and I also think it’s our responsibility to support the cultural and political spaces that young people are creating.”

A short Q&A followed the talk, with questions that included how surveillance in Muslim communities relates to the executive order. What can Wesleyan’s staff do to protect its students? Ali offered some advice.

“We have to create opportunities to support students,” Ali said. “Sometimes students don’t want to get together in groups for fear that that creates another opportunity for people to look at them. Another thing that happens to students with broadly Muslim backgrounds is spaces of prayer. But it’s not about engaging in religious practices its structural violence and we have to do more to find students that are not connected and reach out to them.”

While all the speakers noted that the current administration is too unpredictable to fully anticipate, it will be important not to forget to support broader progressive movements as a deluge of Executive Orders and “dirty tricks” continue.

“We don’t know what the Trump administration will do to target free speech broadly on the left,” Ali said. “I think I want to frame this in a different way. Returning to the question how many of us have been broadly proponents of civil rights and liberation movements in the country. For us in this movement we aren’t talking about that…. Just basic civil rights and rights of human beings to exist. What we realize is when someone is fundamentally attacking that is it is hard to stay focused on other stuff.”