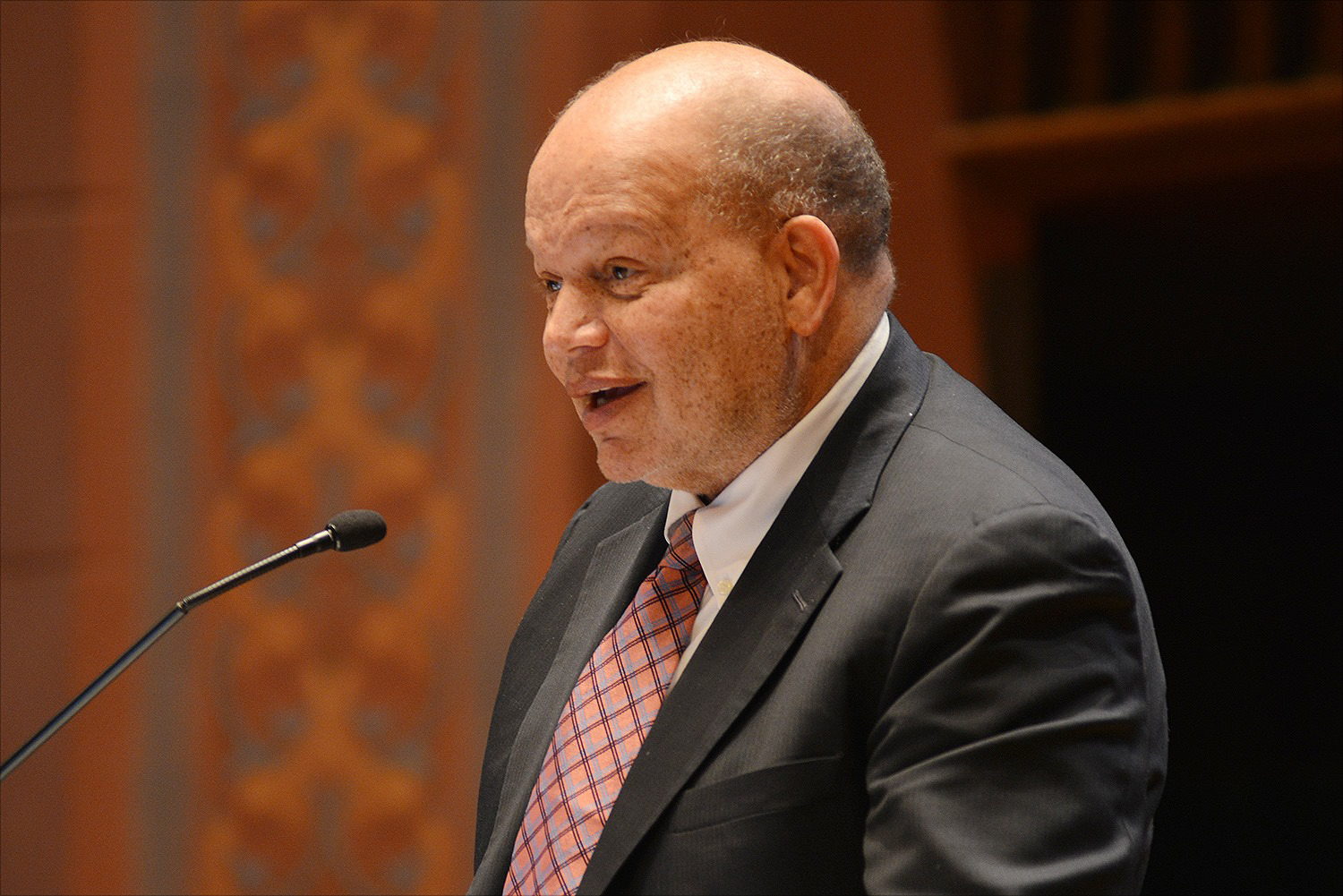 Early on the afternoon of Friday, Feb. 3, students, faculty, and Middletown residents gathered in the Memorial Chapel to honor the life and legacy of civil rights leader Dr. Martin Luther King, Jr. The theme of the symposium, “Freedom is a Constant Struggle,” set the tone for the afternoon’s discussion, where speakers highlighted the problems still facing minorities today and the necessity of continuing Dr. King’s work.

The service began with a short speech from the University’s Vice President for Equity and Inclusion, Antonio Farias, in which he emphasized the importance of Dr. King’s work as a model for civil resistance today.

“This is not one event,” said Farias. “This is a forever event.”

At the end of his speech, Farias asked everyone in attendance to stand up and embrace someone they didn’t know before introducing Jordan Watson, who sang a rendition of “A Change is Gonna Come,” written and originally recorded by Sam Cooke.

After a brief introduction, Julius L. Chambers Distinguished Professor of Law and Director of the Center for Civil Rights at the University of North Carolina Ted Shaw ’76 Hon ’14, took the stage to deliver his keynote address. Since leaving the University, Shaw has enjoyed a successful legal career focused on the continued pursuit for civil rights. For 26 years, Shaw served as President of the NAACP Legal Defense and Educational Fund; while on the faculty of the University of Michigan Law School, he served on the faculty committee that propagated the affirmative action policy upheld by the Supreme Court in the 2003 case “Grutter v. Bollinger.”

Shaw began his speech by reminding the audience not only of Dr. King’s work in the global community, but also of his work at the University. Dr. King visited the University in June of 1964, where he spoke at the baccalaureate service on Denison Terrace before receiving an honorary doctorate in divinity. Mr. Shaw used this connection to remind the audience not to deify Dr. King, but to recognize that behind a great movement, there was a man.

Shaw recognized that people don’t have to be perfect to create change, an idea to which Dr. King is a testament. Though his adversaries tried to undermine his message through the exposure of personal indiscretions, Dr. King rose above.

“He was told ‘stay in your lane’, you know, ‘you’re going to hurt our cause’,” Shaw said. “Yet nonetheless, he did it.… He didn’t want to go to Memphis. He was tired. He was worn out…. But he felt compelled to do it because he had a vision.”

Shaw stated that this is what young people need to do today when they feel compelled by injustice.

“Some student came to me this morning and asked ‘what do we do now’,” he recounted. “I can’t tell you what we do.… What I do or what I say doesn’t matter as much as what you do or say in your youth. The time is yours for the taking.… Don’t look to me, or older people. Look to yourselves.”

Shaw encouraged young people to speak up and fight for their beliefs.

“Engage in struggle… because we who believe in freedom…” Shaw said, “cannot rest,” finished a woman in the audience. “The struggle is constant, [but] we’ll win.”

After Shaw’s speech, many attendees began to share their personal stories with others. House Manager of Malcolm X House Ainsley Eakins ’18 gave an account of the night she was pulled over for a broken taillight, which she later realized was not broken at all.

“I did nothing wrong,” said Eakins. “I was pulled over because of the color of my skin.”

Victor Hill ’78 and his wife, Wanda, drove an hour so they could attend the service.

“I really enjoyed it,” said Wanda Hill. “I thought there were great revelations about Martin Luther King and what his life was really like, versus how people project him to have been…. I thought the conversation about today and how students should mobilize was really important. The theme really articulated our reality: Freedom truly is a constant struggle.”

Erin Hussey can be reached at ehussey@wesleyan.org and on Twitter as @e_riss.