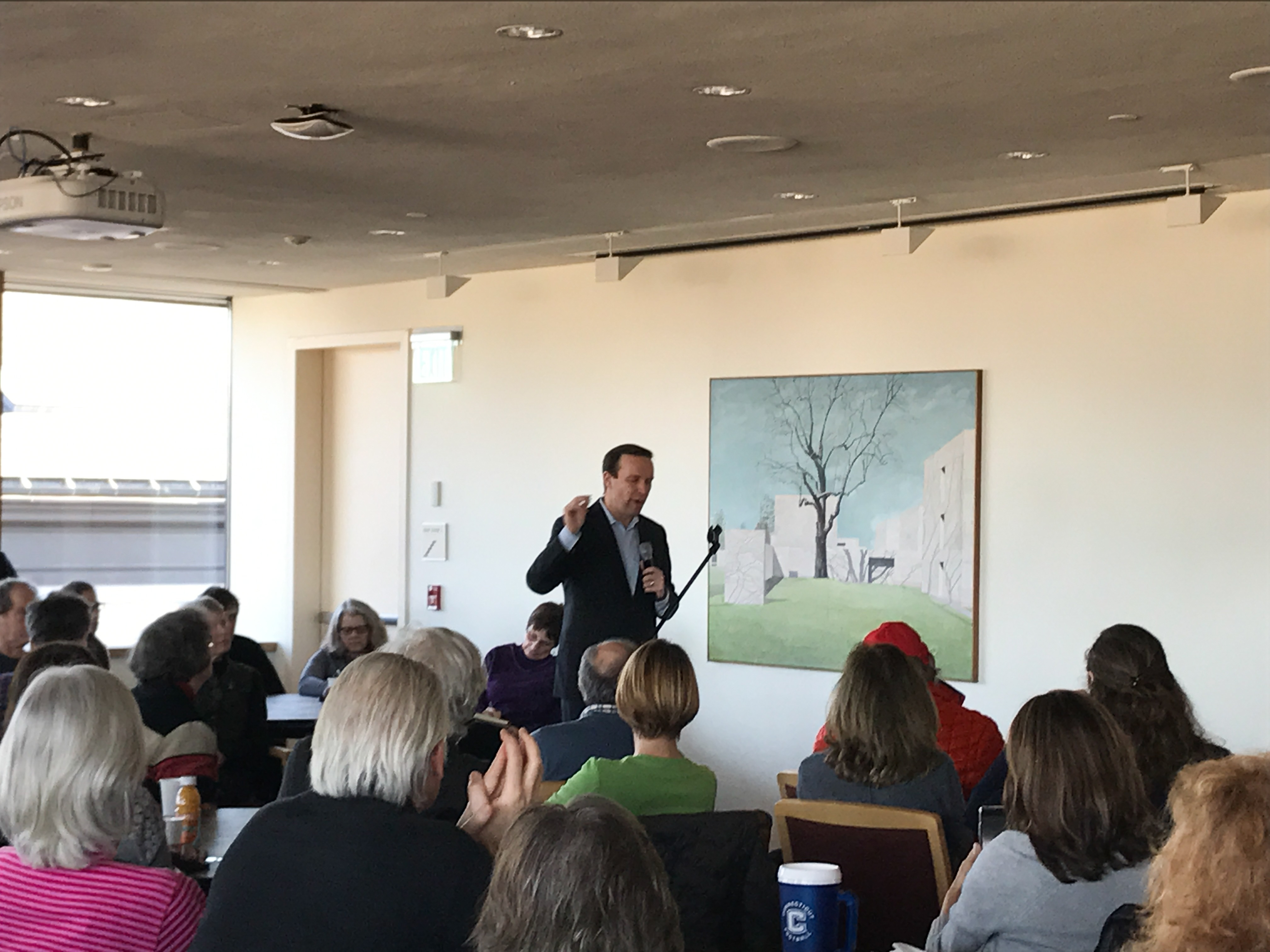 As today’s political climate turns increasingly hostile and the Earth’s temperature has reached record highs, the future of the global environment and the legislation surrounding it has become more important than ever. For this reason, U.S. Senator from Conn. Chris Murphy hosted a meeting at the University on Saturday, Feb. 3 to discuss sustainability policy with local students, academics, and activists. A larger-than-expected crowd gathered in the Daniel Family Commons to share their most pressing concerns with the Senator and hear what is coming out of Washington D.C. regarding pushback against the Trump Administration.

Director of the Allbritton Center for the Study of Public Life and John E. Andrus Professor of Sociology Rob Rosenthal introduced Murphy. Rosenthal cited that the purpose of Murphy’s presence stems from the recent installation of an administration in which top environmental officials are also known climate change deniers. Politicians and civilians alike are exploring other angles from which to tackle issues facing the environment, more specifically maintaining compliance with the agreement reached at the Paris Climate Conference in 2015.

“Everyone in this room understands that climate change and environmental degradation are crucial threats to humankind’s future, perhaps a greater threat now than six months ago, as we apparently have an administration that is not that concerned about environmental issues, and appears hostile to science itself,” said Rosenthal. “At such a dangerous moment, it’s really important that we have public officials who are knowledgeable and concerned in the interest in the great majority of the people, and are brave enough to stand up and say, ‘The emperor has no clothes.’”

Murphy, taking the microphone, immediately engaged the crowd by reading a recent Twitter response to something President Trump posted on his personal twitter: a reiteration of his campaign slogan, “Make America Great Again.”

“I want to share with you, [in response to Trump’s tweet] I tweeted back, and I said, ‘I’m in!! After the epic, humiliating disaster of the last 2 weeks, it IS time to make America great again. First step: please stop tweeting.’”

Moving past humor, Murphy began to lay out his vision for substantive action and policy over the next four years. As many Obama-era environmental protections were passed at the very end of his term–action that Murphy lightly criticized–the GOP-majority Congress could invoke the Congressional Review Act to begin dismantling legislation passed within the last 60 days. Other major political concerns include the possibility of Trump’s walking away from the Paris Agreement and the Clean Power Plant Rule.

However, his message soon turned optimistic again when discussing how to continue to fight against attempts to turn back the clock on environmental progress.

“On climate, though we have not been talking about climate in the way that we have been talking about immigration or healthcare, the same principle applies to climate as well,” Murphy said. “The ability to make this just so uncomfortable will have an effect. I get it, a lot of my colleagues are deniers…but they do believe in re-election.” 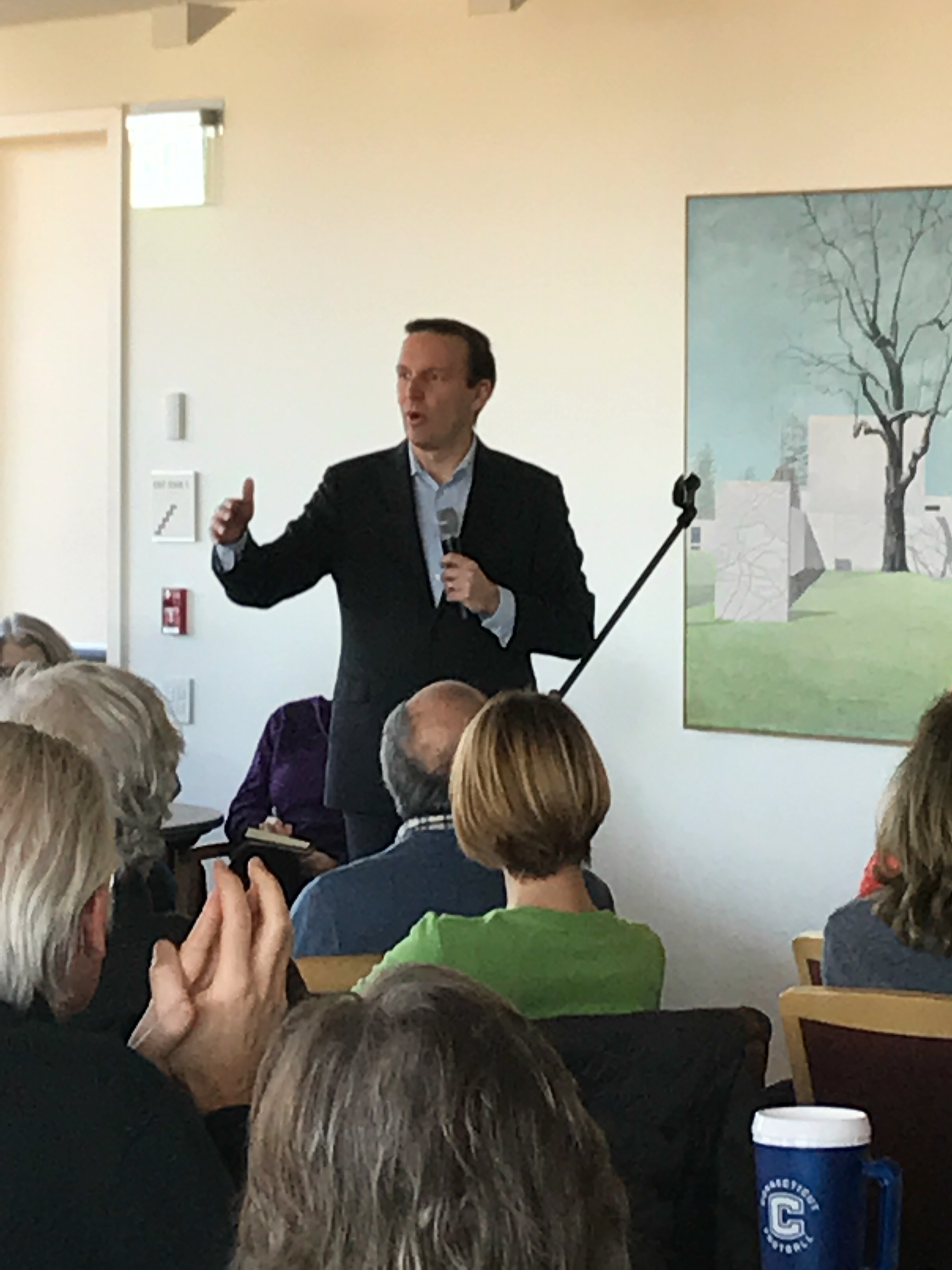 Many in attendance had questions on how they could be directly involved in environmental advocacy work, despite the hostility that the current administration has toward the science of climate change. This included changing the narrative of climate change deniers, especially of those currently in office. In response, Murphy highlighted several specific steps that could be taken, encompassing the to-be-launched Citizen Toolkit to guide civic participation.

“First of all, don’t stop talking to your delegation,” Murphy said. “I know some of are you saying, ‘Oh, I’m just preaching to the choir,’ but it is powerful to be able to [go] down to the floor and say, like I mentioned last week, I got 13,000 phone calls in opposition to Betsy Devos’ nomination to be Secretary of Education, and that’s powerful. When I say that, people do listen. And the other side is calling too.”

Murphy also encouraged the audience to double down on investment and participation in national organizations, as they may have influence in some traditionally Republican states. This included organizations such as the Sierra Club.

He also encouraged the use of social media and the wide-reaching effect that it can have on political and environmental discourse.

“We’ve got to own social media,” Murphy said. “That’s something that you should do in concert with us. That’s one of [the] things I’m going to do–work with all of you through this platform and say, ‘Okay, in the next two weeks this is what we have to get out. These are some graphics and some videos that you need to get out to everybody you know.’”

Murphy also emphasized the power of participating in marches, such as the Women’s March. He noted the role of pure politics in environmental policy as well, particularly the Republican unwillingness to change positions on most issues even when presented with reputable scientific evidence.

College of the Environment Director Barry Chernoff has noticed that the farming communities he has visited in the South and Midwest are often well-aware of climate change but vote Republican based on their economic interests.

“They’re getting a conflated message,” said Chernoff. “So how do we separate the two to allow them, despite the party they belong to, to start supporting environmental protection?”

Murphy responded by acknowledging that this is, in fact, the case and that there are many other Republican constituencies in a similar position–for example, evangelicals and members of the corporate community. He notes that Democrats do need to work harder at convincing these individuals to speak up on environmental issues in meetings held by President Trump.

“We are going to have to do a much better job getting those voices to speak up,” Murphy says. “…We have to be active in trying to get the members of those councils when we go to those meetings to speak up on climate, to tell him what the impact is of going backwards.”

At the end of his session, Murphy highlighted the power of young people and the change that young people can make. Mentioning the statistic that 20 percent of 20-year-olds voted while 80 percent of 80-year-olds did, he emphasized that the demographic that felt most affected about these issues was staying home.

In a comment made after the meeting, he expounded his belief that youth participation plays a crucial role in advancing progressive policies.

“That’s not an excuse not to turn out,” Murphy said. “No one is ever going to be 100 percent satisfied with the candidates on the ballot but that’s never an excuse to stay home. What frightens me is the large number of young people who aren’t paying attention and who aren’t turning out, and the youth turnout is what got Donald Trump elected, so I think that everybody has to ask themselves: ‘Are you going to just wait until the perfect candidate runs, or are you going to try to play a role and get involved?’”