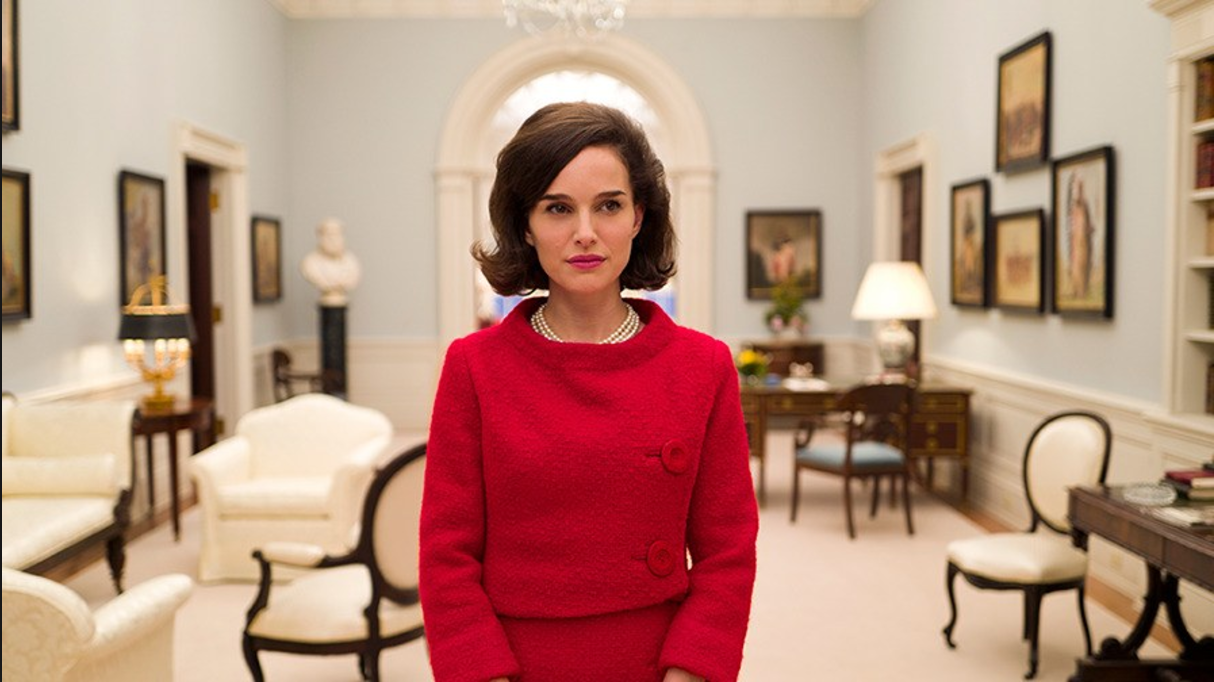 Former First Lady Jackie Onassis Kennedy carefully paces through the White House, trying to maintain her perfect public image in the aftermath of the traumatic death of her husband.
c/o Stéphane Fontaine

While President John F. Kennedy and First Lady Jackie Kennedy Onassis were real people and did, in fact, exist, they were so ubiquitous in American culture that—much like Princess Diana or the city of Paris—our conception of them is based entirely in an illusion. “Jackie,” nominated for the Academy Awards for best costume design, original score, and best actress (Natalie Portman), seeks precisely to examine and ultimately undermine this public illusion that it correctly assumes most viewers enter the theater with.

Ruth La Ferla referred to Jackie Kennedy as “The First Instagram First Lady” in a November New York Times article. Besides being good copy, the comparison is apt in “Jackie.” The film’s meandering, almost voyeuristic cinematography (Stéphane Fontaine) of Jackie O behind the scenes consists mainly of uncomfortable close-ups and at times a shaky pursuit of the mercurial former First Lady. Yet in public, after the hours she’s spent doing her makeup, perfecting her hair, checking for the balance of her hat on her perfect hair and the symmetry of her accessories, Portman’s portrayal of Jackie is grand and precise, complimented by angelic lighting and a bold original score.

While Portman rightfully provides the talent that drives the film, Mica Levi’s Oscar-nominated original score is so integral that “Jackie” would be unimaginably cold and dry without it. Each scene is rendered autonomously emotional and even traumatic with each track, such as the palpable anxiety of “Car,” or the oscillating malaise of “Empty White House.”

The film’s narrative primarily centers around Jackie’s extensive interview with an anonymous journalist (Billy Crudup), who is an abstracted and chillier version of Theodore H. White, with whom the widowed First Lady shared a four-hour interview one week after her husband was shot and killed right next to her on national television. Crudup convincingly portrays the awkward fidgeting and cautious conciliations of a reporter writing a profile on someone he has a crush on, much less the First Lady of the United States. Like a meticulous lead-off batter, Portman dips and weaves past Crudup’s questions, whether they’re fastballs or softballs, and simply returns a lingering stare and a coy rebuke, waiting for the perfect pitch. Eventually, with his top-button undone and notebook filled to the brim, the unnamed reporter and the First Lady settle for the metaphor of “Camelot” to depict the Kennedy White House — the same metaphor White used in his cover story on Jackie O for Life Magazine.

Within this Camelot are lost legends like Bobby Kennedy (Peter Sarsgaard), but also unknown confidantes of the First Lady, like Nancy Tuckerman (Greta Gerwig), who is by Jackie’s side throughout the film. One of the most quintessential sequences in “Jackie” is the depiction of the First Lady’s famous televised White House tour. While the First Lady became renowned for her poise and composure during the tour, not to mention showing off an oratory that could rival her husband’s, screenwriter Noah Oppenheim instead chooses to take us behind the scenes to an imagined interaction between Jackie and Nancy. Deeply anxious about appearing alone on national television for much of the broadcast, the First Lady hyperventilates as she tries to recite her opening lines to her assistant. “Welcome the White House,” Portman utters without feeling behind a timid smile. Gerwig convincingly uses the calming techniques not of an office assistant, but of an old friend, assuring her that she has the natural talent to perform and that she looks beautiful. Breathier this time, Portman intensifies her gaze, and with conviction says, “Welcome to the White House. We’re so happy to have you.”

Ultimately, we come to understand Jackie Kennedy as someone who—through no fault of her own, other than being married to a charismatic, young politician, and being impeccably poised while looking gorgeous in the season’s latest fashions—has been put in an untenable position. To be both the stoic symbol of stability in the process of national grieving and, simultaneously, the relatable, authentic First Lady, ultimately proves impossible. Out of this conflict, Jackie chooses the former, prioritizing her image and a national narrative—in this case, Camelot—over being completely transparent with the American people. Implicit in all of this is her discretion regarding her husband’s infidelities, which would later take on a posthumous public life of their own.

Jackie’s preference for narrative over authenticity reveals something essential not just about the First Ladyship or the White House, but about the nation more broadly: the appearance of excellence and perfection will always prevail over the raw and unpleasant truth. Whether this holds true in today’s politics is debatable, but the legacy of Jackie Kennedy

Onassis has undeniably given a “class,” however loaded that term may be, to the White House, and by extension, the nation. Although other parts of the film may stand out more and linger with different viewers for longer periods of time—most notably the harrowing depiction of the first person shot in the infamous car scene in Dallas—Portman’s stoicism and its national ramifications are what make “Jackie” a crucial American document.