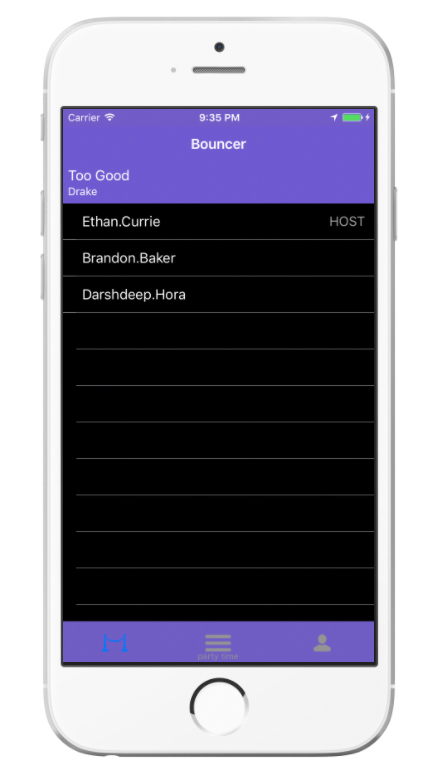 It’s Friday night, and you’re at a party with your friends, music blasting out the speakers. Everyone has different tastes, so there’s bound to be one person who doesn’t agree with the music choice. But it’s hard to make the request known within the large crowd, and in an efficient way. Enter: Playlift, a new crowd-sourced playlist app recently developed by Sam Giagtzoglou ’16, Darashdeep Hora ’15, Ethan Currie ’15, Brandon Baker ’18, and Thaddeus Brown ’17.

The aforementioned team came together after realizing that music can make or break a party. Hora, in particular, cited the frustration with the repetitive and boring party playlists offered already on apps such as Spotify and Apple Music.

“[The idea arose out of] not feeling like I knew enough good music to make a cool playlist, and being tired of asking friends for ‘that one song they played that one time,’” Currie said.

Giagtzoglou, a current software engineer at Amazon and the lead developer of the app, was the one to respond to this concern. Though he is known by some team members as the “venerable wizard of all things computer,” he realized that developing an app requires people of different strengths. In the end, he brought together the five-person team, led by Giagtzoglou.

“Well, to build an app you need people who know how to do all the technical work. But you also need people to handle everything that facilitates app development, like someone to organize weekly meetings, keep development on track, coordinate market research and testing,” Giagtzoglou said. “I enjoy coding projects like this, and thought that this was a cool idea that could be useful. So, I began pulling together a group of people I knew to help out.”

In addition to Giagtzoglou, the team includes Hora, who is the developer responsible for predominantly the back-end of the app; Currie, who works as a project manager; Baker, who assists in developing and releasing the app at the University; and Brown, who is also orchestrating the release.

After brainstorming a feature and layout, developing the beta app, and conducting testing, the app has finally been launched on the App Store.

As described on the app’s website, “Playlift” touts itself as “The People’s Playlist.” It involves creating a live collaborative playlist, which can be custom-named. Users, furthermore, can suggest and vote for the songs that they want to hear. In this way, songs on each playlist are re-ordered: those with a higher number of votes come first.

The format of the app is clean and user-friendly, so there can be ease of use at parties. It also connects to Spotify so that users can use it as a tool while making their personalized playlists and even allows you to find and join parties based on location.

The team behind the app hopes that it can change how parties work, especially at the University. They hope people, by using “Playlift,” will be able to keep track of what kind of music their guests are listening to and, as a result, make their parties more fun.

On a more critical note, the addition of this app in party spaces will encourage more people to get distracted by their phones.

“Some of the criticism we have received is that our app will cause people to use their phones way too much at parties,” Currie said. “But we feel like people already spend a fair amount of time either texting or snapchatting, so taking an extra 20 seconds to add a few songs and vote on the ones already there wouldn’t change much in the way of phone usage.”

In terms of future goals for the project, Giagtzoglou hopes to see how it works at the University before possibly spreading the app to other schools or musical events. In addition, they hope to be able to add more features to the app to make it more comprehensive for parties. Ultimately, Brown sees the app being used in situations beyond parties, like cafes or bars.

“Patrons would be able to influence what type of music gets played at the place they hang out,” Brown said. “In a ‘wildest dreams’ scenario it would be cool to see Playlift used at every Starbucks around the country, but I’m not so sure about that yet.”