Priests’ Nothing Feels Natural is Challenging, Compassionate, and Urgent 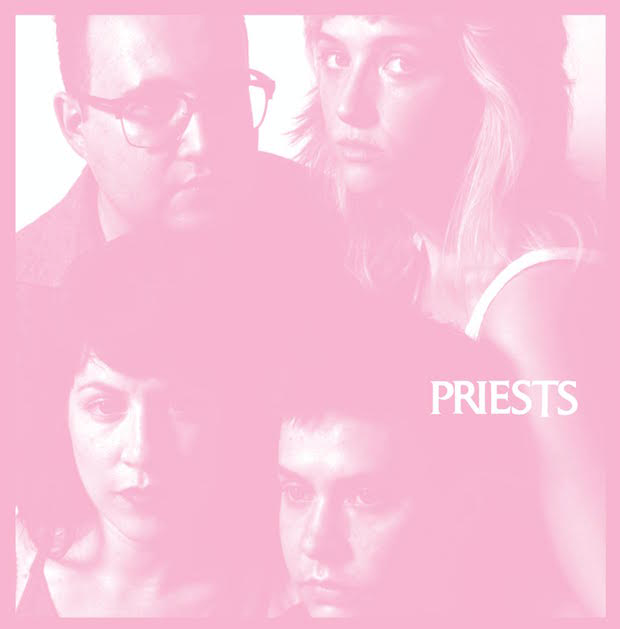 When the D.C. punk four-piece Priests dropped their first LP, Nothing Feels Natural, just a week after Trump entered the Oval Office, it was easy to pick up on their intentions. But rather than making a grand statement on the state of our nation, Priests has always been more concerned with the personal as political. How does a marginalized person go about living day-to-day in a society that gradually chips away at their armor?

“I don’t make friends easily or naturally,” coos vocalist Katie Alice Greer on “Nicki.” “You can blame chemicals or you can blame patriarchy.”

Comprised of Greer, guitarist G.L. Jaguar, bassist Taylor Mulitz, and drummer Daniele Daniele, Priests has been cranking out anti-fascist anthems since 2011. Early on in their career, they released “Usa (Incantations),” a spoken word manifesto against late capitalism and American exceptionalism, only made further relevant by the events of November 2016. They continued this trend on their 2014 EP, Bodies and Control and Money and Power, with songs like “Doctor” and “Modern Love/No Weapon,” showcasing Greer’s confrontational vocals and the band’s urgent rhythms.

On Nothing Feels Natural, Priests takes advantage of the album format by testing out the limits of their genre, not only in its sound but also how far they can stretch its emotional reach. There are the usual distorted punk tracks like “Puff,” which humorously shout out Burger King, Netanyahu, and D.H. Lawrence in under two minutes. But there’s also the danceable surf-rock of “JJ,” the five-minute opener “Appropriate” that devolves into no-wave sludge halfway through, and the positively giddy, X-Ray Spex-esque “Suck,” saxophones and all. The title track is a standout, a haunting tribute to post-punk, with Mulitz’s bassline echoing Joy Division and Greer’s vocals reaching up to a register that resembles Siouxsie Sioux or Debbie Harry.

On “No Big Bang,” Daniele takes the mic and performs an anxious spoken word piece, critiquing the romanticizing of mental illness as a way to make better art. She admits to the exhilaration of “when your mind becomes a rocket,” but cannot relate to others’ genuine enthusiasm toward an overactive imagination. “I mean, it looks good from a distance,” she says, “but when you’re really inside of it you realize it’s fucking terrifying.”

The same can be said to those who viewed Trump’s election as a glass-half-full scenario for the punk community, the folks who responded to his presidency by hoping that at least it would bring about a revival of DIY, protest-heavy music. This viewpoint, while well-intentioned, ignores the non-white, non-male, non-cis punk scenes that have sprouted in the past decade or so, many of whom will suffer the most from this administration. Being a musician won’t protect you from being preyed upon, and the members of Priests know this well.

“I am constantly perceived,” Greer writes in the zine accompanying the record. “Nothing feels natural, I don’t have a natural state, I am always performing.” Regardless of Priests’ audience—the male gaze, judgmental punk purists, or a Big Brother government—the band reclaims that perception both by taking an accusatory tone and by doubling down on the performative nature of their music. When she snarls the word “jacket” on “JJ,” you can almost imagine Greer flipping her own lapels at the abusive ex she’s denouncing. Adding to the visual elements, “Pink White House” was originally named “Airlock,” meant to conjure up the sci-fi trope of an object being released from an airlock and whooshing out into space.

“Pink White House” proves that there would still be a need for bile-spitting punk if Hillary Clinton were elected as president, and that it would come out in full force. (The song was written and released prior to the election results.) Greer takes shots at suburban America and the limited choices of the electoral system (“consider the options of a binary”), but saves the most vitriol for neoliberal complacency and disconnect. “Kneel at the feet of programming,” she sneers. “I’m really not concerned with what you think.” When you consider that the Clinton team relied heavily on an actual algorithmic program to strategize and collect data, one that couldn’t predict every nook and cranny of the country she had to reach, the line becomes even more symbolically poignant.

If there’s one streamlined message throughout Nothing Feels Natural, it’s that the ability to care for others is what we’ll need the most during these times of political turmoil. The album closer, “Suck,” alludes to mansplaining, gender roles, and police racism in a few cleverly chosen words, but one repeated line holds the entire thematic piece together.

“Please don’t make me be someone with no sympathy.”

For Priests, apathy toward whatever cruelty might be upon us, and especially those around us, in the next four years is what got us here in the first place. Radical compassion, they argue, is where our power lies.