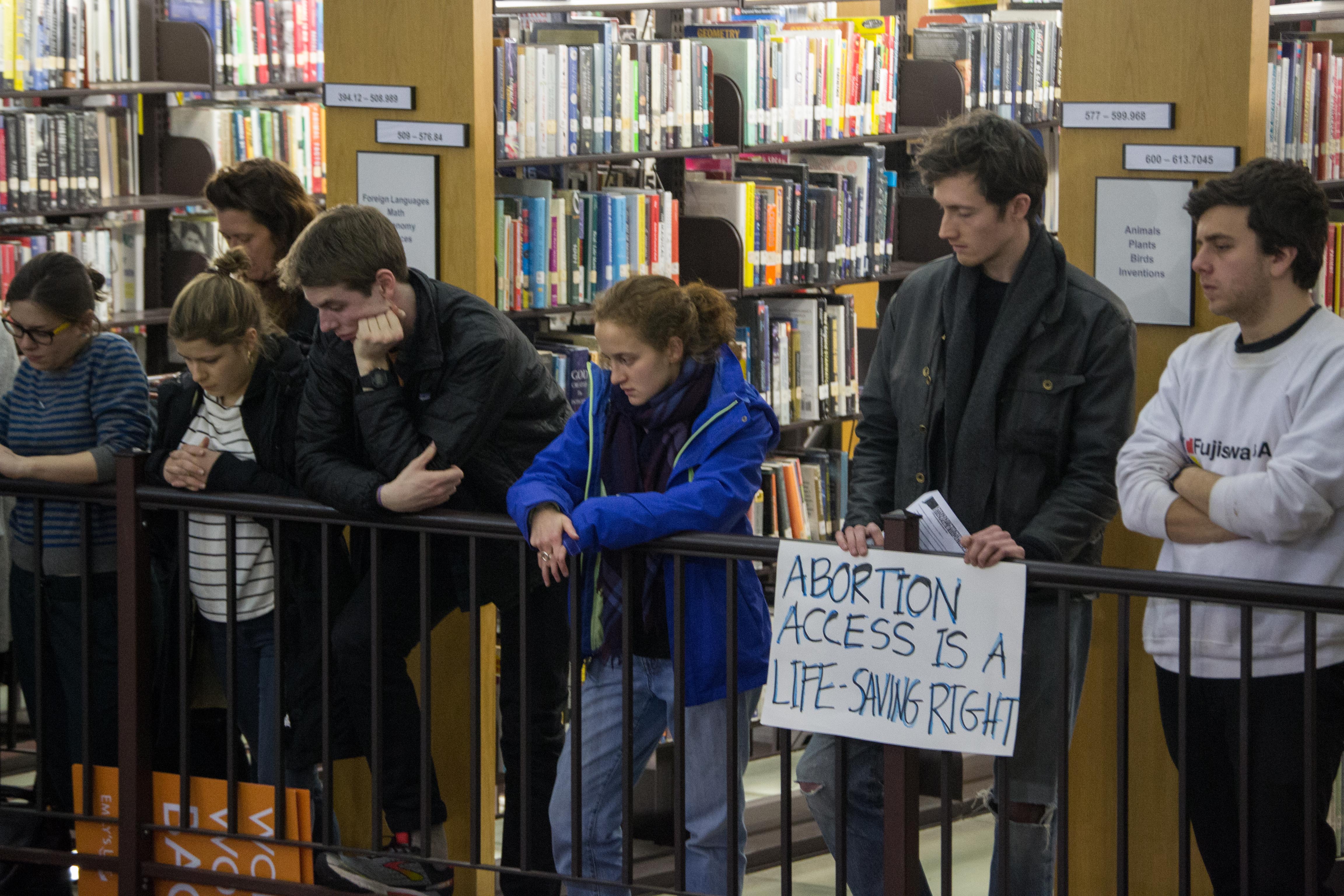 After hearing about a town hall meeting hosted by State Senator Len Suzio, University students organized to confront him about his proposed changes to Connecticut’s abortion laws, particularly his proposition to require parental notification if a minor chooses to have an abortion (Senate Bill 243). Another act of legislation would require all pregnant individuals to receive a transvaginal ultrasound prior to having an abortion (Senate Bill 330).

Word of the meeting spread quickly Wednesday, provoking students to organize impromptu responses, ever cognizant of the often-tenuous relationship between the University and larger community. Simon Korn ’17, president of the Wesleyan Democrats (WesDems), joined the WesDems’ board to strategize earlier in the afternoon. They focused on showing Suzio the views of Middletown’s constituents.

“Our efforts, for this first event, are to try to get Suzio, who is a member of the party that we’re not, to represent our interests and the interests of his constituency in general and specifically his Middletown constituency when it comes to his actions in the state Senate.” said Korn. “This is pretty early in the semester and pretty early in his term, so we just want him to know that we’re a constituency that is going to be active and vocal and passionate in pursuing our interests in anything that he does that has an effect on us.”

In addition to letting Suzio know where they stand, students wanted to question certain aspects of the Proposed Senate Bill 243 (sb 243). Aimee Jones ’17, vice-president of the Wesleyan Democrats, was interested in the specifics of the court process.

“We were talking about reproductive rights, and on the table is a bill that [requires] parental notification [of a minor’s pregnancy in order to have an abortion], and if you don’t want to give your parents notification, you’d have to go through a court process,” Jones said. “So one of the things we’re interested in finding out is how long will that court process be and is that really just a stalling technique that restricts abortion access.”

“Any organization is better when it’s in a team; the more the merrier,” Korn said. “Right now, we’re working as quickly as possible to get ourselves together and get as many people who want to go to this event to this event.” 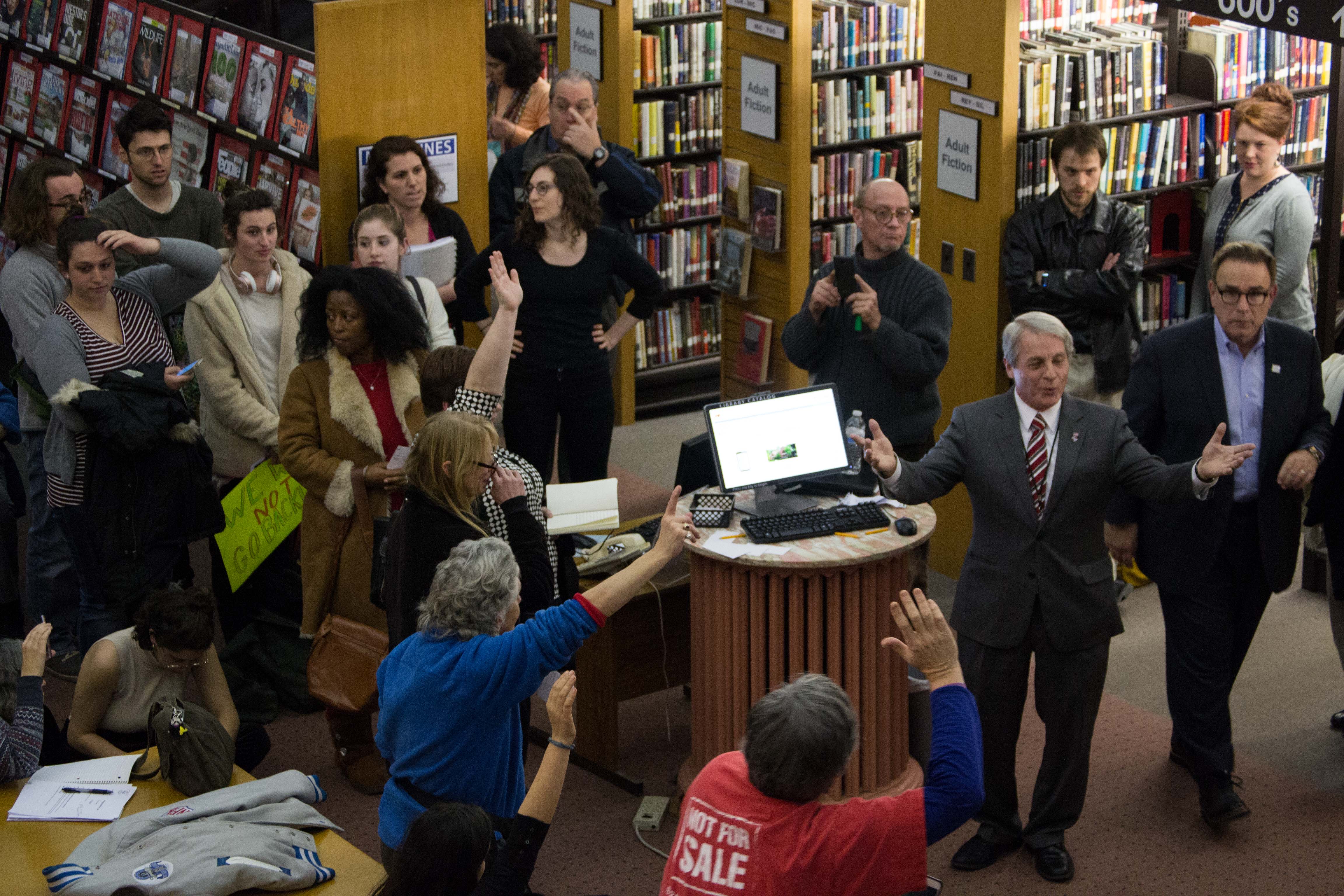 A poster-making session preceded the meeting in a senior house, where the best way to approach the meeting was discussed. Anna Pezanoski-Cohen ’17 said students did not want to disrupt the town hall.

“I think we hold a very intricate position in the Middletown community, where we do have the obligation to speak up for things that are going on in the community because we are constituents, and on the other hand we do enjoy this very privileged position,” Pezanoski-Cohen ’17 said. “What a lot of people were bringing up was the idea of not protesting in a way that disrupts the chance for Middletown residents to have a voice in the situation. But we do want to be able to voice our concerns as well.”

Beth Townsend ’19 was also present at the poster-making session, and in favor of simply making posters and holding them silently at the town hall.

“There is a spectrum of ways you can go into this Middletown town hall: you can either be disruptive, chanting, protest with signs, or in the middle in the spectrum you’d probably be sitting down with signs, and at the end of the spectrum, you are sitting there politely, quietly, and perhaps participating,” said Townsend. “I think the signs are a good idea as long as we’re not disrupting or interrupting. It’s still goes smoothly and we can ask questions, but at the same time they know where we stand right from the beginning.”

The main goal of students was to hold Suzio accountable for the effects of sb 243.

“On a basic level, we really want to hold him accountable and show him that that’s what we plan to do,” Jones said. “We plan to galvanize, we plan to come in groups, and we plan to show him another side of things that he might not think about. Hopefully he’ll make some changes.”

Due to the oppositional nature of the protest against Suzio’s agenda, no students who support his pro-life sentiments could be reached for comment at the event.