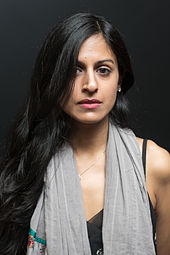 Senior editor and columnist at The New York Times Book Review Parul Sehgal spoke at Russell House on Wednesday, Nov. 16, as part of the Prose and Poetry Series. She read aloud two of her own pieces, the first of which she wrote just one day before her talk at the University entitled “This Week,” and the second of which was a published book review from January. Her talk was followed by a Q&A session, in which she answered questions pertaining to her writing and profession.

Sehgal wrote “This Week” in response to last week’s election. She spoke of her intense care for her three-month-old baby, detailing how she logs everything her child does, from how much she eats to how many hours she sleeps. Later, Sehgal revealed that this was the first piece she wrote pertaining to her daughter. She then described how the results of the presidential election impacted her care of her daughter.

“This week I couldn’t bear to take her outside,” Sehgal said.

Sehgal continued to explain the other ways in which the election results affected her. Her sister suggested that perhaps it was time to leave the United States. Sehgal told members of the audience how she reacted to the news by reading a variety of materials, ranging from Dr. Seuss books to the speech Stephen Bannon gave on Judeo-Christian values at the Vatican.

She also spoke of journalist Gwen Ifill, who died of cancer on Nov. 14.

Sehgal then proceeded to read aloud her book review of Bohumil Hrabal’s “Mr. Kafka: And Other Tales from the Time of the Cult.” The review, entitled “Invisible Designs,” was published in The New York Times on Jan. 12. Sehgal preceded reading the review with a short introduction, explaining why she chose to read that specific review, saying that she has been thinking about racism lately.

“The real function of racism is distraction,” she said.

She further explained this statement by saying that when racism emerges, people tend to talk about methods of resistance and oftentimes stop doing things for themselves. Sehgal underscored the importance of doing things for oneself, and proceeded to read her review aloud.

In the Q&A session, Sehgal discussed her work. She noted the difficulties she encounters when writing profiles, stating that it is like writing fiction, as the writer must set a scene.

“I had to work on myself,” she admitted. “I had to do a lot of work conversationally.”

During the Q&A session that followed her talk, Sehgal detailed how she prepared writing a profile, saying that she had to gain more confidence, as well as learn to hone her reporting skills. In that situation, she explained, one must get the interviewee to talk more than oneself, as well as figure out what is appropriate to ask and how to disguise one’s nosiness.

One student inquired about Sehgal’s opinion of the relationship between technology and books, to which she responded that she prefers reading physical books.

“I think I’m emotionally attached to the way the book feels in my hands,” she said. “Should it matter? It shouldn’t matter, but it does.”

Asked about the best piece of writing advice she has ever received, Sehgal relayed a story about a writing teacher she had who would make students read the first few lines of their work aloud and then tell them not to be so boring.

“When people write stories, they are offering something to their readers,” Sehgal said. “Because of that, they should always keep their readers in mind while writing.”

Finally, Sehgal described what it is like to write for a newspaper, stating that people who work at a newspaper or with books often feel insecure as to whether what they are doing is helping people.

“I liked how [Sehgal] compared writing to maintaining a conversation with someone at a party,” Gitomer said. “That just gave me a whole new outlook on what writers are trying to accomplish.”

“My favorite part specifically was the language [Sehgal] used in both of her pieces,” Chartoff said. “I thought she had a very articulate way of saying things, and it was in a way that I personally would never have thought to write about certain situations.”