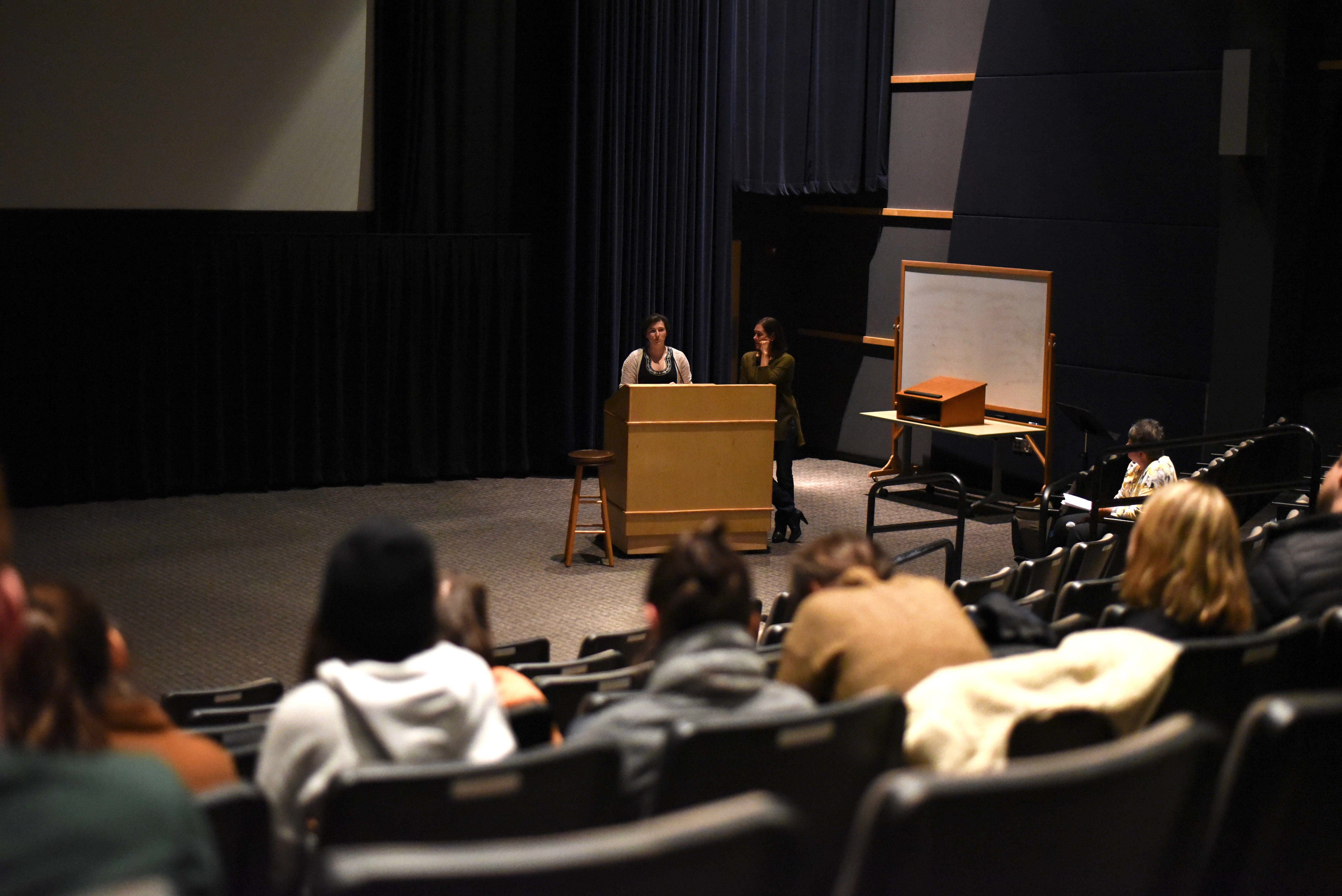 On Nov. 14, the student group WEconSent held a free viewing of the documentary “It Happened Here” in the Goldsmith Family Cinema. The film, produced by Wesleyan parent Marjorie Schwartz Nielsen, explores campus sexual assault through the stories of four survivors grappling with life after rape. Students Willa Nielsen ’17 and Lex Spirtes ’17 of WEconSent, along with Sexual Violence Resource Coordinator and Therapist Alysha Warren and Title IX Deborah Colucci, were the primary organizers.

In raw and painful testimonials, the four young women describe their experiences in heartbreaking detail, conveying a deep sense of betrayal when describing their friends-turned-perpetrators. For Kylie Angell, a first-generation college student at the University of Connecticut, he was a lacrosse player who forced himself upon her. For Angie Epifano, an Amherst student from a small town in Florida, he was a classmate who assaulted her after she fell asleep while they were watching a movie together. For Sarah O’Brien, a Vanderbilt student, he was the one she trusted to escort her home after a party. For Erica Daniels, another UConn student, he was a love interest who dropped something in her drink.

Every woman confesses that the biggest betrayal, however, came from the people who were supposed to protect her. Instead of offering belief and support, campus authorities met each young woman with disbelief, condemnation, and denial. Angell recalls the words of the campus police officer to whom she reported her rape.

“If women stopped spreading their legs like peanut butter, rape would stop happening,” the officer said.

“Why didn’t they look at her as a victim?” her father Rick Daniels said with tears in his eyes.

In response to their administrations’ negligence in the handling of their cases, Epifano and O’Brien filed Title IX lawsuits against their schools, as did Angell and Daniels. Their joint-suit against UConn, which they filed with their friend Carolyn Luby, led Connecticut legislators to pass significant legislature protecting students’ rights. Despite being met with apathy and shame, each girl’s experience empowered her to speak out and become a force for institutional change.

Following the film viewing, a Q&A was held with the Nielsen, Angell, and the University’s Deputy Title IX Coordinator Debbie Colucci.

Nielsen and Colucci urged survivors to report their assaults, if not to protect themselves, then to protect other possible victims.

“Give your hotline your perpetrator’s name and say ‘I just want this name on file so if somebody else comes forth, call me and we can start to build a case,’” Nielson said. “That’s how Occidental’s case, Missouri, Montana, Colorado, so many cases have been built as a result of [perpetrator reports].”

Nielson also encouraged everyone, not just women, to visit knowyourIX.org in order to educate themselves on their Title IX rights, admitting that her biggest regret was not being able to include any men in the film. Chair of the Title IX Student Advisory Committee Kate Macken ’19 agreed, expressing hope for a more diverse audience as well.

“I’m glad to see all these women, but I’d love to see some more men,” Macken said.

Despite the lack of diversity, the film seemed to deeply resonate with the students in attendance, especially given the current campus and political climate.

“I might be biased because of my mom, but I was just really happy that I was able to bring this movie here,” said Nielsen’s daughter, Willa Nielsen. “I think, especially given a lot of things that have been going on on campus lately and the history of Wesleyan and the mishandling of Title IX cases, that this was really relevant. I really liked the aspect of activism because I think a lot of students at Wesleyan are really trying to organize stuff, and I think that this was inspiring for people and a good way to show that activism on campus can actually make a lot of changes.”

At the end, Nielsen expressed her gratitude toward the students who attended the viewing.

“I’m really grateful to the students who came out,” she said. “We really need to keep the awareness and the education going. I feel like recently there’s been such a setback. Over the course of making this movie, with the University of Virginia and the Rolling Stone article, so many naysayers keep coming forth. This issue is getting bigger and wider and louder. We need to make change, so I’m hoping if I keep doing this and keep getting students, maybe something will change.”

Erin Hussey can be reached at ehussey@wesleyan.org and on Twitter as @e_riss.