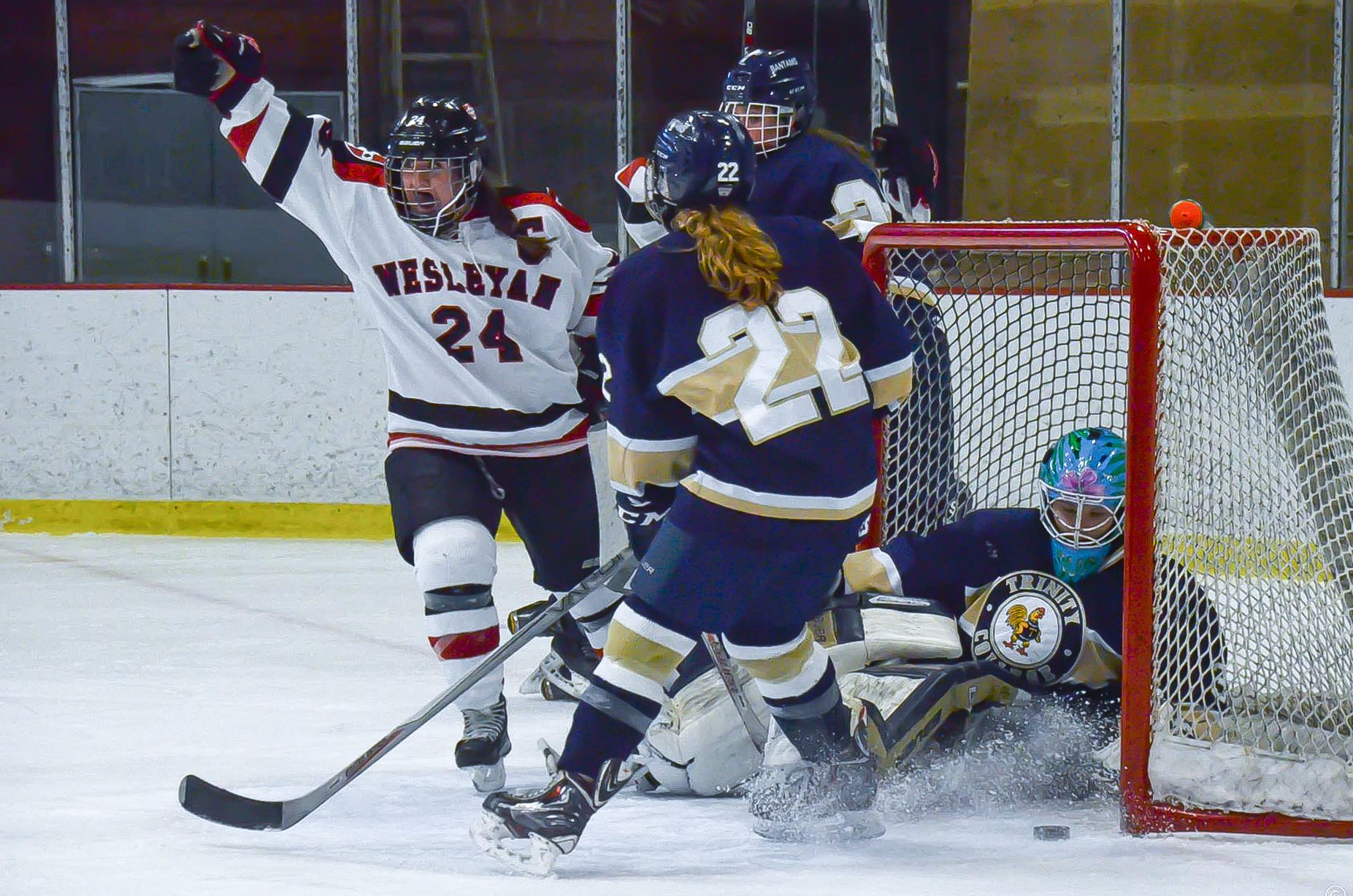 This year’s women’s ice hockey team takes the rink at 7 p.m. on Friday, Nov. 18 at Sacred Heart University. While the team proved stronger in non-conference games last year, this game against Sacred Heart still may prove difficult, as the team’s 2015-2016 non-conference record fell just short of .500, with three wins and four losses. Overall, the team finished last year’s season with a record of 4-17-2.

The Cards’ first NESCAC game won’t be until Dec. 3, where the team will stack up against Williams. The Little Three has proven tough competition for numerous years, with Wesleyan unable to take the title since the 1998-99 season. However, Wesleyan has consistently won half of their games against Williams since the 2011-12 season. Amherst, on the other hand, has dominated the Little Three in recent years, beating Wesleyan in every matchup since the 2003-04 season and taking the title every year since the 2006-07 season.

In addition to the Little Three, NESCAC competition is fierce. In the 2013-14 season, Wesleyan went as far as the NESCAC quarterfinals before losing 2-1 to Bowdoin.

“Our goal for this year is to win games,” Sarah Goss ’19 said. “We want to keep it simple and work hard every day at practice to keep improving and building up to a winning season. Obviously the end goal is a NESCAC championship, but that starts with the first game and taking it day by day.”

Luckily, the team has experienced NESCAC members on their side. Returning for her third season at Wesleyan, Tara Connolly, the assistant coach, played for Bowdoin College’s women’s ice hockey team during her undergraduate years. There, she played goalie and helped the ice hockey team win the 2013 NESCAC championship and make an appearance in its first NCAA tournament since 2005. Later in the same year, she went on to receive First-Team All-NESCAC. A couple years later during the 2014-15 season, Mike Finoia, another assistant coach for the team, won a NESCAC championship with the women’s team at Trinity. He spent three seasons coaching there before coming to Wesleyan, where he returns for his second season.

“We are looking to move up within the NESCAC, make a bigger splash in the standings, and get league points every weekend,” Head Coach Jodi McKenna said. “This is a really competitive league in which to play and the teams that do the best are the ones that accrue points every series. The biggest area of improvement for this season is consistency within and over the course of games. This not only allows us to compete with anyone in the league, but also fosters confidence and allows the team to evolve as it should over the course of the season.”

Although not a former NESCAC member, McKenna isn’t short on experience. Before coming to Wesleyan in 2007, she coached nine seasons at Saint Lawrence University. However, her coaching efforts go beyond the college world, to national and global affairs. In 2009, she acted as an assistant coach to Team USA as they won gold during the International Ice Hockey Federation World Women’s Championship. The next year, McKenna helped guide Team USA to a silver medal during the Winter Olympics in Vancouver, British Columbia, as an assistant coach.  After returning to the Cardinals in the 2010-11 season, she continued to make strides with the national team, specifically with the National U-18 squad.

The third assistant coach, Caitlin Peters, also boasts national experience. She was a key player on a top Division I team at Quinnipiac University and a participant in the 2002 Youth Education Through Sports at the NCAA Women’s Frozen Four Division I National Championship.

With prepared and experienced coaches, the team heads into the 2016-17 season with determination. While the team lost five seniors this year, returning and new members make the future season bright. Two of last year’s starring players, Jess Brennan ’17 and Ellery Sarosi ’17, return to the team after successful individual performances in the previous season. Both players are at the top of the team for career goals and often played key roles in racking up points in last year’s games, despite some tough losses.

“We need contributions from all of our returning players, most notably our class of seven seniors. They each bring a different piece to our team game,” McKenna said. “When they fire on all cylinders, so will the team.”

“The team’s changed from last year, in my opinion, by continuing to build off a really solid foundation. We had a great senior class last year with a lot of talent and awesome leadership, and I think this year we’re going to have more of the same,” Goss said. “This year’s seniors have continued to lead us remarkably well, and it’s made us all excited for the season. We brought in eight new freshmen with a ton of talent, all of whom are going to be big contributors.”

The Cardinals’ first home game will take place on Jan. 2nd at 7 p.m. against Nichols College, and their first NESCAC home game will be on Saturday, Jan. 14, against Conn College.