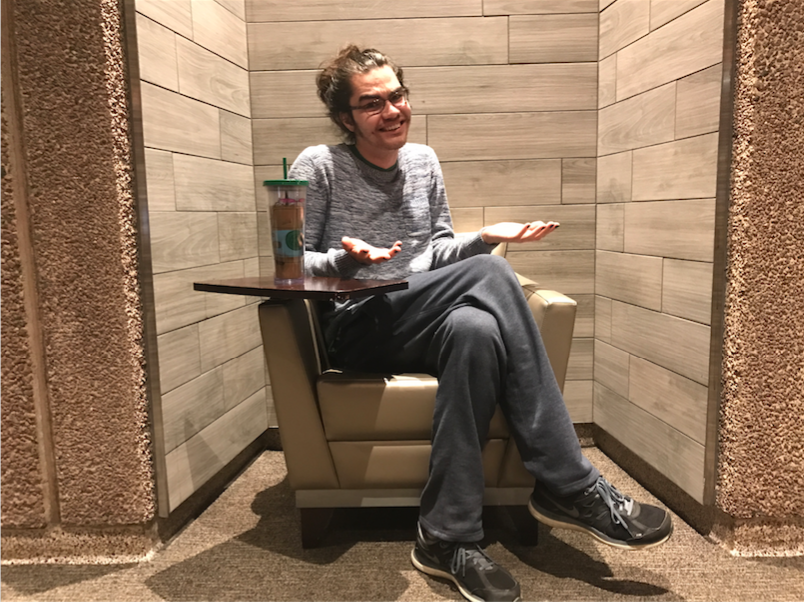 To say that Sam (Tam) Curry ’17 is recognizable around campus fails to do justice to his compassionate soul and infectiously uplifting presence. Often, Curry is approached while working at one of his myriad jobs on campus and turns a stranger into a lasting friend. If you don’t see Curry out and about, he’s probably working on his thesis on the indigenous people of New Zealand and their conception of their land compared to that of the British colonizers. Originally from New Zealand, which has seen a precipitous increase in visits to its immigration page, he continues to fight the good fight in Middletown. The Argus caught up with Curry late one night in Pi Café before his shift at the reserve desk in Olin, where he couldn’t help but get tied up talking to friends on his way to refill on caffeine.

Argus: Why do you think you’re a WesCeleb?

Sam (Tam) Curry: I mean, I guess I work a lot at various positions around campus, like the reserve desk in Olin, and I work at the info desk in Usdan, so I’m interacting with students quite a bit. I see friends passing by, and I have lots of interactions on a daily basis, so that’s probably a big factor.

A: Are you much of a mingler in those positions, or do people come to you?

SC: People generally just come to me. They’re not the type of jobs where I try to get people to come. Like, I’m not going to get someone to check out a book, or, like, set up something in Usdan, but a lot of people still come and have questions and stuff, so I just try to be helpful.

A: Tell me a little bit about your thesis. It’s on indigenous people in New Zealand, right?

So to the British, land is like a resource. It’s something that’s commodified, bought and sold. It’s part and parceled out, you know, it’s a commodity in that way. Whereas for the Māori, it’s more of a familial relationship to the land. Genealogy, for example, is a huge part of Māori culture, and the land actually falls within Māori mythology, within the family tree of humans and of nature, so the land itself is Patuanuke, which means earth mother, and she had all of her children, which is the pantheon of gods, and one of those is the father of humans, and that’s something that the British don’t really have. So I’m exploring those ways of viewing oneself within the universe.

A: How did the thesis come about? Was it from your roots in New Zealand?

SC: Yeah, I was born in New Zealand of Māori descent, and one thing I noticed in the American education system is that there’s no focus on New Zealand, which is fair enough. I don’t expect it at Wesleyan, so it’s more of a niche thing that I get to explore on my own. I tailor a lot of my coursework to N.Z., so if there’s a research paper, I’ll try to weave some Māori in there, which is always fun.

A: How do you find the kind of academic resources and support for anything relating to New Zealand? Is it just the library here, or are there professors that have been particularly helpful?

SC: People like Barry Chernoff in the College of the Environment have been very helpful. They’ve offered me a lot of support when I ran into troubled times and bureaucratic nonsense, so they really helped it get off the ground.

A: Do you see yourself kind of synthesizing these interests? With the rights of indigenous people, and then your interest in the environment, and all of the other things you’re involved in, do you see yourself finding a way to merge those together?

SC: That’s a good question. I don’t know, but they definitely intersect a lot. Environmental justice often falls in line with low-income people of color. After Wesleyan, I’m looking at going to grad school. I’m not sure how soon. I think I want to go into, like, sustainable design and urban planning, and kind of see how I can merge those different intersections in social justice with an actual career.

A: If you had to give advice to either yourself or any other freshman coming into Wesleyan, what would it be?

A: If you had to give yourself advice, say, 40 years from now, what would you want your older self to know?

SC: I would tell myself to do my homework [laughs]. I still have a problem with that. And I feel like I would be a lazy old man, because I’m a lazy old man right now. So yeah, do what you’re supposed to do. Do it.