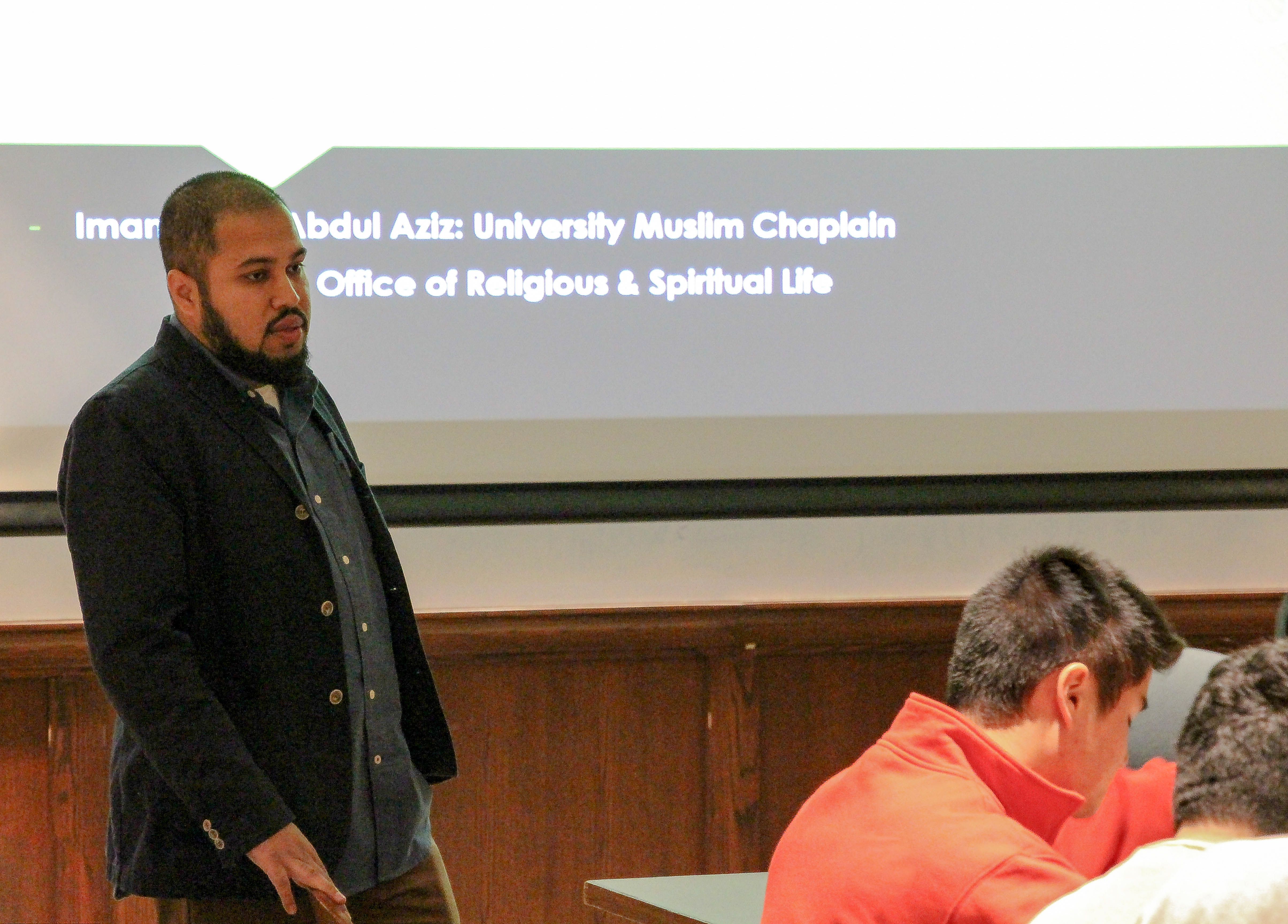 Newly hired University Imam Sami Abdul Aziz has been working hard both inside and outside of the campus community to better educate non-Muslims about Islam. Affectionately known as Imam Sami outside of his University title of Muslim Chaplain, Aziz runs a consulting group called Common Ground Services, which holds panel discussions and presentations on various aspects of Muslim life, from holidays to misconceptions about terrorism and the Islamic State. While it may seem like Imam Sami has his work cut out for him with the victory of President-Elect Donald J. Trump, Aziz is working harder than ever as students he cares for and gives guidance to live in uncertainty and fear after the electorate’s implicit approval of Trump’s proposed Muslim ban. The Argus caught up with Sami after evening prayers in his office above the Shapiro Writing Center.

Argus: Do you remember where you were and what your reaction was when you found out that Trump was going to win the election?

Sami Aziz: I remember I was home on Tuesday night at some point—I don’t have TV at my house for religious reasons, because there’s a lot of hate being spewed on TV and sickness, so I decided to just not watch TV anymore, but I use the Internet—and I logged in to check the polls, and I started seeing the numbers edging towards red. It just got worse, and worse, and worse. People started posting online in the Muslim community that Trump’s gonna win, Trump’s gonna win….The worry is compounding with all of these Facebook messages and people posting about going to Canada and Australia for jobs. It pretty much became clear that he was gonna win, so I went to bed.

I woke up, and I had a major headache from all of this. It just caused me a lot of stress personally. It’s a shocker for the Muslim community, because we were not expecting at all for this to happen. Over a million Muslims registered to vote.

I was thinking of not even doing anything for a week. I was thinking of going out into the mountains or something and re-finding myself, thinking about where to go from here, pondering, and make some of what we call “Tawhid,” to reflect upon God and his greatness. And I was really thinking about doing that, but then I got a message from a Muslim student that said that they were going to take a personal day and stay in their room all day, so I said, “You know what? I need to go down to Wesleyan, and help other people out,” because it’s my job to be there for them, to listen to them, to hear them, to give them some inspiration.

Last night, after I left campus, when I was running out [of the solidarity gathering in the Daniel Family Commons], I was going to a church. Seventy-five people showed up, which was more than last week. It was important for me, because one of the biggest fears as a Muslim is, what are the white people gonna do to us? We’re the minority. We’re mostly not white. We’re either brown or black, usually. So to go in front of 75 white people and be treated so well and hear so many good words, even after I gave an ISIS presentation, was good. I feel so happy now, and I think that’s probably what most Muslims need. They need to hear from a white person that, “Everything is okay. We’re here to protect you, don’t worry about that.”

A: So tell us about the work you’re doing outside the Wesleyan community, like at this church for example?

SA: So about two years ago, I got an email from a Christian pastor asking about a beheading in Syria by ISIS. It was a little bit insulting when I received it, because it’s like me asking another white American here, Christian or not, about something that somebody of their color did or of their religion did in America and asking, “Why did it happen? Why did Steve in Nebraska decide to shoot so many people? Or Sarah in Texas decide to blow up this clinic?”

Like, why would I ask you that question? It would be ridiculous, right? But for him it wasn’t, because in his mind all Muslims are somehow connected and we all follow the same way of life and we have the same interpretation, and at that point, I was of the viewpoint that I’m not gonna get involved in any of this stuff, because I have nothing to do with ISIS, but this nice, sincere, honest man has this question, and actually most Americans probably have questions about ISIS, Islamophobia, and Islam in general. And women in Islam, and hijabs, and jihad, and sharia, and all of these hot words. There’s nobody else doing the work, so I just started off with Bloomfield public library talking about Islam, and it went well. From there I’ve been booked at 10 libraries, and 30 or 40 churches, and I’ve been to universities and other institutions.

A: What do you think most Americans, and particularly Trump, get wrong about the Islamic State and Islam? Like people such as Bill O’Reilly or Rush Limbaugh, for example, who take a passage from a poor translation of the Qur’an without context and just throw it out there, and a lot of people live in this fear, but they don’t know anything about this religion or how the Islamic State uses it for its own ends.

SA: Donald Trump’s advisor, Frank Gaffney, is who he gets his Muslim and terrorism advice from. So what Trump’s done is taken these exaggerations or false information about Muslims, and he’s just sort of shot it out there….

In reality, if you look at ISIS and the number of people they’ve killed, it’s nowhere near as many as the Mexican drug cartels. We should be more scared of them, actually. They’ve killed over 160,000 people. ISIS has killed less than 10,000. [Syrian President] Bashar al-Assad has killed over 200,000. So in terms of numbers, you can’t compare it.

But unfortunately, we’ve been given this image that Islam and Muslims are here to destroy people, and that’s just a false narrative because there are 1.6 billion Muslims, and less than 200,000 are part of any terrorist group, according to the State Department.

A: What do you think is next for at least your role in the broader Muslim community at Wesleyan and in Connecticut, and for the people who are coming to you to seek some guidance and help?

SA: So I think that for Connecticut and our school, my role is going to be increased visibility. Last night the Christians asked me, “What can we do, Sami, to help you and your work?” And I was thinking really hard about it, because I wanted to give them something that they can concretely help me on, and I said, “Help me get into the churches and libraries and schools where there are Trump supporters, people who have never met a Muslim.” I wanna go in there, and I want you to come with me as backup, probably because it could be pretty nasty, but we have to go to these places, because 45 percent of voters in Connecticut voted for Trump, and I need to go there and talk to these people and show them the truth of Islam.

According to the Pew Research Center, over 60 percent of Americans have never met a Muslim. And Islam is the number one hated religion, the most dehumanized in the U.S. So I want to get into these places, and I want Wesleyan and I want the people of Connecticut to help me get into these places and to talk and give the truth, and through this talking and dialogue, we’ll create love.