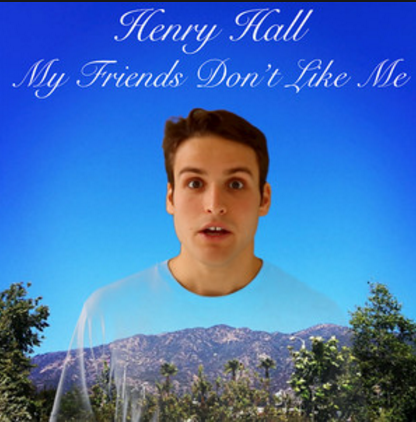 Henry Hall ’14 and his eponymously named band have been on a roll as of late, fresh off a residency at The Bowery Electric, one of New York’s premier music venues—especially for up and coming musicians—and have just released a new EP, My Friends Don’t Like Me. In a slight departure from their first EP, Henry Hall juxtaposes a more upbeat tempo on the whole with lyrics that mainly center around anxiety and isolation.

The opening track, “Comfort Zone,” begins to characterize the EP’s anxious serenity. With a similar feel to “Oxygen”—Hall’s biggest hit as a student at the University—“Comfort Zone” floats along without getting boring. Featuring only a few basic guitar chords, an oscillating bass line, and a little bit of synth, “Comfort Zone” lets Hall’s voice carry most of the song. With an incredible vocal versatility, Hall’s voice has become the main attraction to a band that is nonetheless well rounded with Robby Caplan ’14 on bass and John Snyder ’12 on drums.

The pacing of Hall’s lyrics and their digression into a sick fantasy is juxtaposed with what would independently feel like an upbeat and happy song. Caplan’s bass and Snyder’s drums keep the song spunky, giving it a playful feel that prevents it from coming across as too weird. Then, like every good Henry Hall song, there comes a moment when Hall shows off his vocal versatility. Going from a scratchy cackle to a high-pitched howl, the opposite ends of Hall’s vocal register become overlaid with the chorus of the song, making for a sensory overload that only a top-notch producer (Josh Bonati) and singer can pull off together.

With “Company,” the EP starts to kick into high gear. Hall’s guitar is more biting than before, and a coordinated crescendo makes the song flow in inclines and drops much like a car driving over rolling hills or your first wooden rollercoaster ride. Beyond the conversational notion of company, the lyrics examine the awkwardness of the return to childhood friendship.

Hall also stands out with a flashy guitar solo about halfway through the two-minute track, exuding every last bit of energy before the cerebral final two songs.

Much like his hit single “Fake Words,” the penultimate track “Wyoming” shows Hall at his softest and most vulnerable. Riffing off an isolationist fantasy of living off the land and depending upon no one, “Wyoming” begins to drive home the palpable angst of the EP without the listener necessarily even being aware of it. In singing the word “Wyoming” alone, Hall makes the same complete journey he showed off in “Dream Lover,” starting low and scratchy before going high and serene. If there is a Henry Hall song from this EP to show your friends for the first time, make it this one.

The EP culminates with “Everything’s Fine,” which is a far more anxious and charged version of “There’s Nothing Wrong With Me” from Hall’s debut EP. Caplan’s bass along with Hall’s now acoustic guitar keep the song driving forward, creating such a reverberation that Hall’s voice plays off it in tandem. Then, the moment everyone has been waiting for finally comes. Hall does something with his voice that borders on the indescribable. He executes a high-pitch tremolo singing “my friends don’t like me,” almost as if he were applying pressure to his throat to a harmonica-sounding effect.

This verse serves as the climax of the EP, and it proves why Henry Hall is an artist worth introducing to a broader audience: He can do things with his voice that almost no one else can, and he’s able to keep his tricks cohesive with the sound of his bandmates. It will be exciting to see how Hall builds off the momentum of the band’s residency at the Bowery Electric and the success of the EP, but what’s worth paying closer attention to is how Hall’s sound will evolve overtime given his versatility and potential.

My Friends Don’t Like Me is available on Soundcloud, Spotify, and Apple Music.