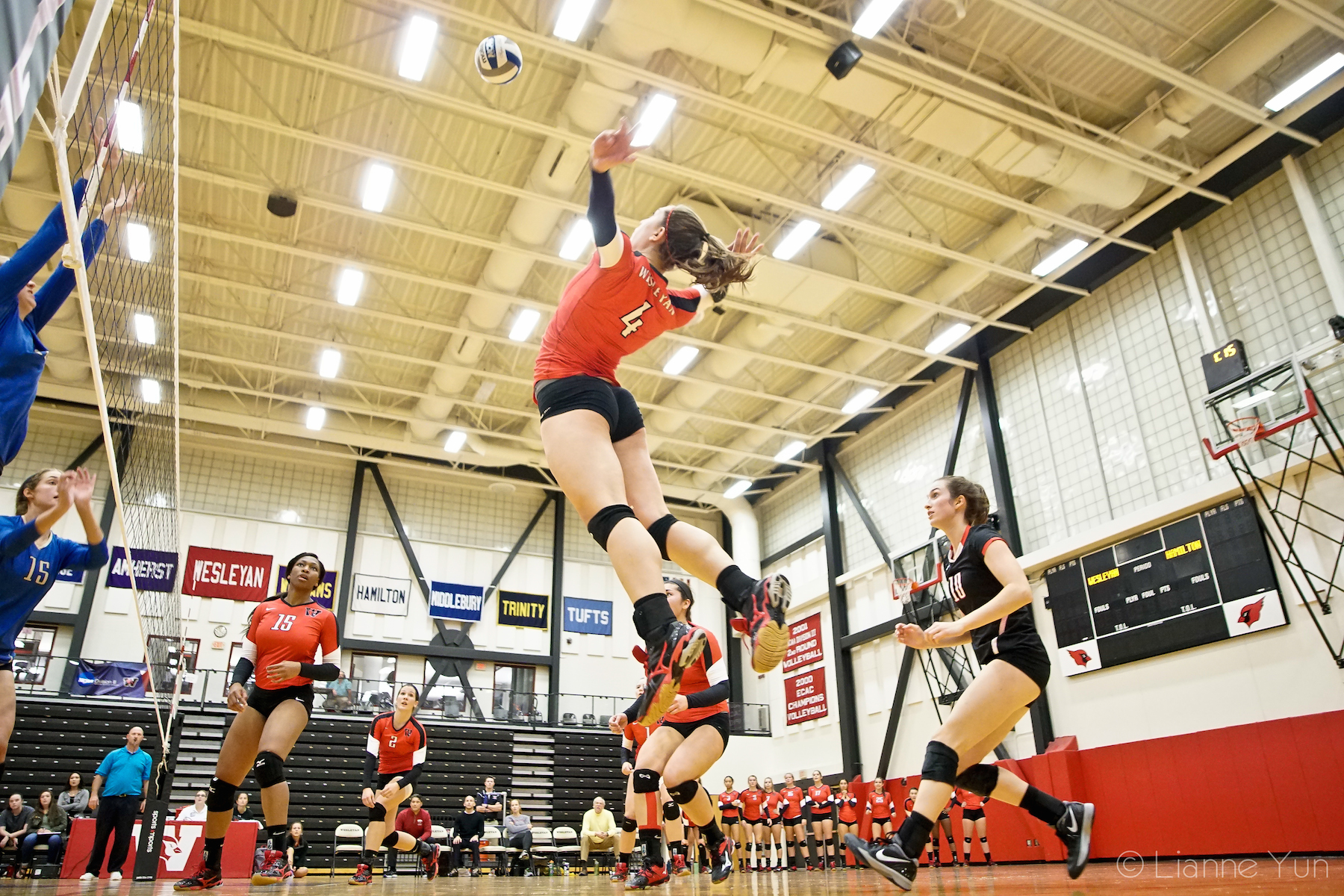 Wesleyan defeated Williams this past Friday in an exhilarating five-set comeback. The Cards then played another tight match against Amherst on Friday but lost in a fifth set, putting an end to the team’s five-game win streak. Wes will have a chance at postseason redemption as they prepare to replay Amherst in a playoff match this Friday.

The hot streak began on Saturday, Oct. 14. The Cards took off for Massachusetts over the weekend, stopping for a quick 3-1 victory against Endicott College on Friday before heading to Wellesley, Mass. for a tournament the next day. The tournament was full of excitement for the Cards, who battled out two fierce five-set matches, dropping the first to Ithaca College and making an explosive comeback win against Wellesley College.

The next week, the Cards trounced both Conn College and Wheaton College, with especially formidable play from Nicole Hilton ’20. Her high hitting percentage and performance earned her NESCAC Player of the Week. Hilton is the second member of the 2016 squad to win the award along with Gabby Bennett ’20, who won it earlier this season.

Wesleyan went on to obliterate Westfield State College in straight sets on Oct. 25. The Cards went into their Little Three rivalries loaded with momentum.

“I think we learned a lot from those matches and we will be able to use [that knowledge] going into the end of the season,” Emma Robin ’19 said.

Wesleyan’s Sarah Swenson ’18, Madeleine Lundberg ’19, Kaira Muraoka-Robertson ’20, Bennett, Hilton, and Mia Hogan ’20 started in Friday’s match against Williams. The Cards managed a slight lead early in the first set. Williams, however, kept up the pressure and surpassed Wes late in the set to win 25-20. The Ephs then carried their momentum into the second set to win 25-21, the Cards now one set away from being swept.

Wes came out undaunted, however, winning four unanswered points to start the third set. Wes fought hard to keep its lead and seized the set, 25-23.

In the fourth set, Wesleyan went on a quick five-point run to take an early lead at 6-2. A rattled Williams squad could not keep up with the Cards’ powerful play. Wesleyan took this set with greater ease at 25-15.

The fifth set proved remarkably close. The rivals battled hard with no one ever taking more than a one-point lead. At 14-15, Wesleyan’s Robertson set the ball to Stasie Litinsky ’20 who pounded a kill to tie the set at 15 all. Another set by Muraoka-Robertson went to Bennett, who spiked a booming kill to tie the match again at 17 all. An attack error by Williams gave Wesleyan match point at 18-17. Wesleyan won 19-17 on another Muraoka-Robertson set to Bennett, who put away the final kill.

This was Wesleyan’s first time defeating Williams since 2009. Williams’ loss also marks a new dynamic in the Little Three, as it puts an end to the Ephs’ three-year reign over Wesleyan and Amherst.

Head Coach Ben Somera played the same starting lineup against Amherst. The match took a similarly turbulent turn as the previous day’s duel against Williams, with the rivals battling neck and neck. Wesleyan came out strong and took the first set, 25-23, but lost the second set, 18-25. The teams alternated again for the following sets, with Wesleyan taking the third, 25-18, and Amherst taking the fourth, 20-25.

Amherst played strong in the fifth set, forcing Wesleyan errors and posting well-placed kills. They took the final set 15-8 to win the match. Amherst now sits on top of the Little Three, as the Ephs beat Williams 3-2 earlier in their season.

Wesleyan’s players are excited about their win over Williams and undaunted by the close loss to Amherst.

“We have been working really hard in practice and I think it showed this weekend,” Hilton said. “It was a good fight on Saturday and we are looking forward to playing Amherst again on Friday.”

The players intend to keep the strong practice routine as they steel for the rematch.

The team finished the regular season 15-7, with a 6-4 NESCAC record, marking the squad’s best performance since 2008.  Friday’s matchup against Amherst will give Wesleyan a chance to defeat the team for the first time since 2008.